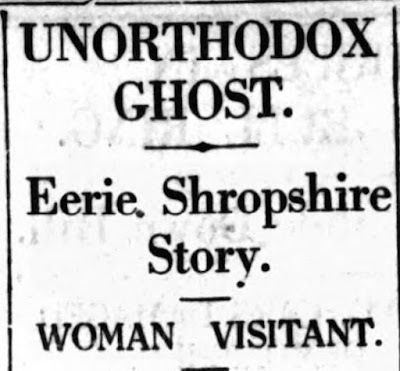 The mysterious "Woman in Black" is a classic variety of apparition. One English example was reported in the "Nottingham Evening Post," December 21, 1928:


The Shropshire village of Northwood, between Wem and Ellesmere, is in state of excitement, caused by a mysterious apparition.

Accounts have been given by independent witnesses of the appearance of a woman, dressed in black, who vanishes in an instant when approached.

A farmer named Morris and workman named Peate were returning home at night with a horse and trap, when they saw the woman, whom they thought they recognised as the wife of a local farmer. They stopped the horse to give her a lift, but she vanished, and they got out of the trap and searched in vain for her.

A man named Egerton, in the same district, was walking along the road at night, and saw the woman in the glare of a passing motor-car. The car passed over the spot where the woman stood and he ran forward expecting to find her body in the road. There was nothing to be seen.

Mr. Arthur R. Ellis, of Wem, a dealer in wireless apparatus, was driving his car in the same district, and saw the woman, whom he knew well, standing in the road. He put on the brakes and swerved to avoid her, and pulled up, but there was nothing to be seen.


Unfortunately, I haven't found any more information about this story.
Posted by Undine at 4:42 AM