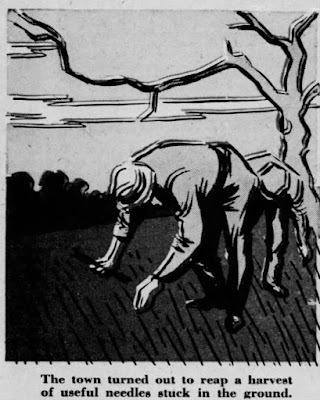 Let's talk about the time it rained knitting needles over Kentucky, shall we? The "Decatur Weekly Republican," on April 13, 1876, copied an item from the "Harrodsburg Gazette":


The Richmond "Register" refers to the strange phenomenon which occurred at Harrodsburg about 1845 [other stories say March 1856], of the shower of knitting needles. This strange occurrence was neither second to the Bath county carnipluvia in its marvelousness, nor in the satisfactory character of the testimony to the fact. There are a number of persons of the most reliable character yet living who cheerfully bear testimony to the fact.

Mr. F.W. Curry upon whose father's lot the shower fell, thus refers to the fact:

The shower occurred during the night. The needles fell over an area of an acre or more of what was used for a hemp factory lot. There was a storm of rain and wind during the night--in the morning the needles of all sizes, some of them whole and some broken, were lying on and sticking in the ground all over the lot. There were two or three pounds of them. Numbers of them were picked up by the women and used. No explanation of the phenomenon could be given. It was conjectured in the midst of the poverty of all explanation that these needles had fallen from the clouds. No one had missed any needles. They were found as related. The most substantial citizens can testify to the fact. No explanation has ever been given. We forebore mentioning it on account of its marvelousness. We are glad our neighbor took the initiatory. Mrs. John Thomas has some of the needles to this day.


According to other news stories, in 1903 a number of "prominent and well known citizens of that day" made a notarized statement attesting to the truth of the event.

As a knitter myself, I would find a rain of needles now and then to be very convenient. An occasional yarn shower would be appreciated, as well.
Posted by Undine at 5:29 AM