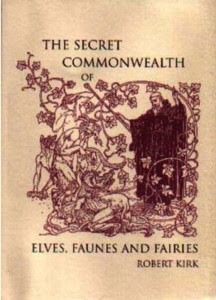 Few people like having tell-all books written about them. Authors of these exposés have often been the target of lawsuits. Of course, if the subject of these books happens to be fairies, the consequences can be even harsher. Andrew Lang, in his introduction to Rev. Robert Kirk's "The Secret Commonwealth of Elves, Fauns, and Fairies," discusses the legend of how Kirk's extensive knowledge of the Fairy Kingdom brought him to a very unpleasant end:

He died (if he did die, which is disputed) in 1692, aged about fifty-one; his tomb was inscribed--

The tomb, in [Sir Walter] Scott's time, was to be seen in the cast end of the churchyard of Aberfoyle; but the ashes of Mr. Kirk are not there. His successor, the Rev. Dr. Grahame, in his "Sketches of Picturesque Scenery," informs us that, as Mr. Kirk was walking on a dun-shi, or fairy-hill, in his neighbourhood, he sunk down in a swoon, which was taken for death. " After the ceremony of a seeming funeral," writes Scott (op. cit., p. 105), "the form of the Rev. Robert Kirk appeared to a relation, and commanded him to go to Grahame of Duchray. 'Say to Duchray, who is my cousin as well as your own, that I am not dead, but a captive in Fairyland; and only one chance remains for my liberation. When the posthumous child, of which my wife has been delivered since my disappearance, shall be brought to baptism, I will appear in the room, when, if Duchray shall throw over my head the knife or dirk which he holds in his hand, I may be restored to society; but if this is neglected, I am lost for ever.'" True to his tryst, Mr. Kirk did appear at the christening and "was visibly seen;" but Duchray was so astonished that he did not throw his dirk over the head of the appearance, and to society Mr. Kirk has not yet been restored. This is extremely to be regretted, as he could now add matter of much importance to his treatise. Neither history nor tradition has more to tell about Mr. Robert Kirk, who seems to have been a man of good family, a student, and, as his book shows, an innocent and learned person.


As Scott noted in his "Letters on Demonology and Witchcraft," "It was by no means to be supposed that the elves, so jealous and irritable a race as to be incensed against those who spoke of them under their proper names, should be less than mortally offended at the temerity of the reverend author, who had pried so deeply into their mysteries, for the purpose of giving them to the public."
Posted by Undine at 4:43 AM