The Poltergeist of Granite Creek 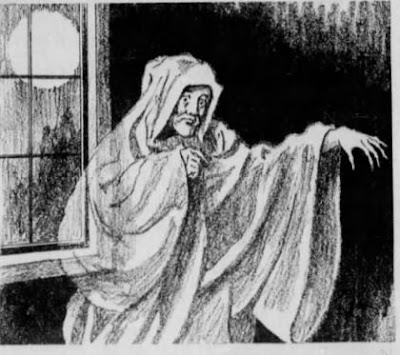 Poltergeists are a troublesome and frightening lot, but they are surprisingly rarely truly dangerous or malevolent. One exception to this rule was a very angry entity that in March 1935 tormented prospectors in Australia's Palmer River goldfields.

Our only source for the episode is an account written by Joe Jones, one of the spirit's victims. Although he wrote his manuscript in 1938, it did not see print until 1971, when the Cairns Historical Society's journal published it under the title "The Granite Creek Ghost." Despite this lack of corroboration, there is no reason to believe Jones was not writing truthfully.

The story opened early in 1935. Although the Palmer region had a huge--and extremely violence-plagued--boom after gold was discovered in the 1870s, by the early 20th century the fields were largely played out. However, a few persistent prospectors lingered in the area, mining tin and praying for gold.

Among these lonely few was Joe Jones and his partner, Dick Clarke, who had set up a stake on the invitingly named Cannibal Creek. (And yes, in the bad old days there was a good reason why the area got that appellation.) At Granite Creek, a few miles away from their camp, a man named Jimmy Ah Quay made a threadbare living growing vegetables and prospecting bits of tin. Quay's only neighbor was another Chinese man, left unnamed in Jones' account. This man was "suffering from some loathsome disease." Quay looked after the invalid as best he could, until his patient died in January 1935. Quay buried him, then, as a precaution against infection, burned all the dead man's belongings.

The following month, Jones and Clarke volunteered to help Quay mine more tin with the use of explosives. Quay went into civilization and got the necessary provisions. He brought back with him an assistant: a young man named Willie Hip Wah. After giving a tutorial in the use of gelignite, Jones and Clarke returned to their camp. They were surprised when after a few days, the two Chinese appeared, carrying all their possessions.

"My place haunted," Quay explained succinctly. "We can't live there; ghost come; he break up everything."

His listeners thought this was nonsense. They privately suspected that Willie was longing to return to town life and so was pulling a cruel hoax on the old man. They reassured Quay that they would go to his camp and "catch the ghost."

Indeed they did. The minute Jones and Clarke arrived at Quay's camp, their horses went into a sudden panic. The terrified animals broke down the horse yard and fled.

Jones did not take the hint. He and Clarke still assumed they were dealing with a very human foe. No sooner had he said as much to Quay that "I noticed some coils of fuse were jumping on the floor...I put it back [and] it all jumped back a few minutes afterwards."

That was merely the opening act. For the rest of the day, the men watched plates lifting off the table and smashing against the roof. Cups and cans bounced around the cabin, ricocheting off walls. By the end of the day, the men were in the midst of a "tornado." "Bottles, dishes, and cooking utensils were thrown about, striking the iron roof and walls and making a terrible din." A faint, eerie light moved throughout the room.

Jones was finally convinced this was no ordinary practical joker. He suggested they all go outside the cabin to see if the mayhem would follow them. It did. Quay--who throughout seemed the main target of the entity's wrath--was pelted "with broken plates, bottles and other missiles." Jones' lantern was mysteriously smashed. When he got another lantern, it too was destroyed. They suffered a rain of sticks, rocks, and tin cans.

When they went back into the cabin, an invisible force continued pummeling them with dishes, tins, and scrap iron, the whole making an "awful din."

"Are those things happening, or have I gone suddenly mad?" Jones asked his partner. "Too right they're happening," replied Clarke. Clarke added that his experiences fighting in WWI were "a picnic compared to this," and that if it wasn't so dark and stormy outside, he'd make a run for it.

Later that seemingly endless night, the entity became even more frighteningly violent. A few minutes after Willie tried retiring to bed, he screamed for help. The other men found that something had wrapped a rug around his head so tightly they had difficulty removing it. By the time they freed the boy, he was unconscious, and remained so until morning. This poltergeist was not only destructive: it was murderous.

Throughout the night, the men continued to hear a weird tapping around the cabin, as well as groaning noises. At dawn, there was a brief quiet. Then the uproar started up again with a vengeance. Loud rapping noises emanated from the cabin. Objects were violently hurled through the door. Quay's suitcase hit the ground and flew open, scattering the contents. Worst of all, fires began breaking out all over the cabin, defying all efforts to contain them. The cabin was soon completely in flames. Jones was baffled by the fact that although the cabin was completely consumed, the fire did not spread, even though burning embers fell all around the site.

The men gathered what little they could save of Quay's belongings and returned to Jones' camp. If they assumed their paranormal ordeal was over, they were in for a nasty surprise. That night, "the business started...tins and bottles jumping around, hitting walls...everything in the place started to jump down." For the rest of the night, the men were pelted with scraps of tin until finally at dawn, the activity ceased.

Thankfully, this appeared to be the last of the poltergeist. The men were left in peace. Probably very wisely, Quay never returned to his former camp site. He found employment elsewhere, and after a few years returned to China. Willie Hip Wah eventually opened a successful bakery in Cooktown.

The only reason Jones could find for the strange and terrifying experience was that they had been persecuted by the spirit of Quay's dead neighbor. He noted that as his cabin burned, Quay commented, "I burn him, he burn me." However, it is hard to see why the ghost would have such a violent grudge against the one man who had helped him in his final days.

Perhaps some things are simply beyond all human explanation.
Posted by Undine at 4:46 AM