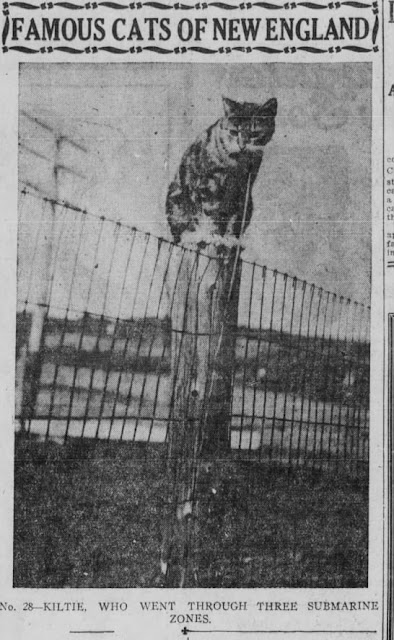 
Kiltie was so baptized because he was born in Scotland. But he's an American now: retired recently from active war service with the United States navy, and resides in Searsport, Me. The good U.S.S. Ozama came to Kiltie's native kitchen on the Isle of Arran, near Glasgow, in 1918, and by doing so changed Kiltie's career considerably. A big machinist's mate named Melvin Thompson fancied the kitten and took him aboard ship under his coat.

Adventure with a big "A" began for the six-day-old kitten from that day. He went through three submarine zones safely. He won the undying devotion of every gob on board. Supplies were low and Kiltie remembers well the night when he heard there were only three cans of condensed milk aboard, and that it was to be no plain gob bill of fare, but was to be reserved for the little Scottish kitten. This, in the face of court-martial if caught.

Upon his arrival at Norfolk, Va., Thompson got a big crate. Kiltie, given farewell pats by a hundred hands, was shipped to Searsport, Me., to the home of Captain Pendleton, a seagoing man who could realize what a seagoing cat had been through. For a week Kiltie was on the road without food or drink and arrived "all in," but the bracing Maine air and good milk worked wonders and now Kiltie holds his own with any cat in the neighborhood.

His one weakness is peanuts, and folks laugh because he eats the shell and lets the nut go untouched. Except for this extravagance Kiltie is real Scotch and makes a thoroughgoing cleanup of all daily rations. His master attributes his peanut wastefulness to shell shock, due to long periods in the submarine zone.

Kiltie is eager to show his brothers and sisters in Scotland that the Post has elected him to a place among the famous cats of New England. He wants them to know how well he's getting on in the States.
~January 5, 1921


Kiltie and the "Boston Post" did not forget each other. Four months after this story appeared, Searsport's most famous feline sent "Post" mascot Hindy a basket of catnip.