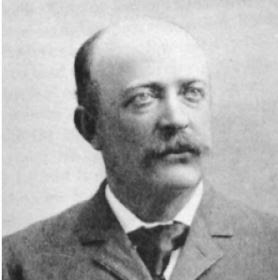 George B. Saxton of Canton, Ohio, was the classic lady-killer. In the end, the tables were neatly turned when a lady killed him.

The dashing, well-to-do man had a long string of broken love affairs behind him, all destroyed by his unwillingness to commit himself to one woman. He became engaged at least twice, but on both occasions he chickened out at the last moment and heartlessly abandoned the women virtually at the altar. One of his ex-fiancees dealt with being jilted by dying soon afterwards--of a broken heart, it was said. Another consoled herself by running off with her family's chauffeur.

Saxton eventually moved on to a married woman named Anna George. Unlike most of his previous conquests, Mrs. George, the wife of a carpenter named Sample George, was of a considerably lower social class than the well-connected Saxton. Perhaps he thought this would make her more accommodating. If so, he made a very dangerous mistake.

This illicit love affair quickly became so serious--on Mrs. George's part, at least--that she left her husband. Sample retaliated by suing Saxton for alienation of affection, but unfortunately for him, Saxton had the money and clout to out-lawyer him, ensuring that the suit remained stymied in the court system for some time.

Showing a blithe ignorance of her lover's track record, Anna assumed that George would now marry her. Saxton proclaimed his eagerness to do so--of course, she had to get her divorce first. He displayed his willingness to marry her by offering to send her to South Dakota. After six months of residency there, he explained, she could get a quick divorce that would keep her name free of scandal back in Ohio. And then, he sighed, they could at last become one in the eyes of the world.

Mrs. George obediently zoomed off to South Dakota, and after the six months were up, returned to Canton a free woman.

She had a nasty surprise waiting for her. True to his previous form, Saxton proved to be all talk and very little action in the marital department. When Anna began to speak of setting a wedding date, he told her flatly that he did not feel ready to marry anyone. And the more she pressed him to put a ring on it, the more excuses he found for avoiding her altogether.

Before long, Anna came to the jolting realization that she had left her husband and robbed her two young children of a stable home for nothing. She was duped, and she was dumped.

Anna George, however, was not of the complaisant nature of Saxton's previous flings. She filed a lawsuit charging Saxton with breach of promise. However, Saxton was able to use his friends in high places to have the suit thrown out of court.

Anna then turned stalker. She began following her unfaithful lover all over town, causing such scenes that Saxton got a restraining order against her. Anna scornfully dismissed such legal niceties. She continued hounding his every move, filing more lawsuits against him, making increasingly angry threats against this man who had so casually ruined her life.

One day, when Saxton was out bicycling with his newest lady friend, a pretty young widow named Eva Althouse, Anna suddenly leaped in front of their path, pointing a gun at George. Like a highwayman in a Victorian melodrama, she ordered him to accompany her back to her home. He meekly did so.

When they were alone in her apartment, Anna delivered yet another angry lecture about his weaselly, caddish refusal to marry her, ending with a threat to shoot him if he ever saw Eva Althouse again.

After this episode, Mrs. Althouse got her own restraining order against Anna George. This was about as effective as Saxton's had been. Anna told at least one friend that she would kill Saxton if he kept seeing Mrs. Althouse. When it was pointed out to her that she risked the gallows if she did such a thing, she snapped, "I don't care!" She told another acquaintance that when her former husband's lawsuit was settled, "there will be either a funeral or a wedding."

While all this was going on, Sample George's old alienation of affection suit at last came up for trial. How times had changed. By this point, Saxton's fear was that the vengeful Anna might take her ex-husband's side and offer some embarrassingly damaging testimony against her old lover. Saxton set about trying to get back in her good graces. He swore to her that if she told the court that it had been her husband's brutality to her, and not Saxton, that was responsible for her leaving Sample, he really would marry her. He even set a wedding date. Meanwhile, Saxton's influential friends were able to persuade--or intimidate--Sample into dropping his suit in return for a cash payment of $1800. (Mr. George had recently remarried, which might also have helped persuade him to let bygones be bygones.)

No sooner was the threat of Sample George's lawsuit gone that Saxton's eagerness to marry Anna once again faded away. Once again, Anna was seeing her wealthy lover slipping away from her. The question was, would she accept defeat, as Saxton's previous girlfriends had done, or would she continue to fight? How would this impossible situation be resolved?

The answer to at least that latter question came on October 7, 1898. That evening, while Saxton was about to enter the home of Eva Althouse, (carrying champagne and pajamas,) he was confronted by a woman dressed in black. An eyewitness--who was, unfortunately, too far away to identify the woman--saw her pull out a gun and shoot Saxton twice. She began to walk away, when she heard her victim crying out for help. She calmly walked back to where he was lying in agony, shot him two more times, and vanished into the surrounding darkness. George Saxton was now very quiet, because he was very dead.

Saxton's murder presented the Canton police with a very delicate situation. The dead man, you see, was not just another dissolute playboy. He was the brother of Ida Saxton McKinley, wife of the president and First Lady of the United States. Law enforcement realized from the beginning that their job was not just to investigate a murder, but to manage a scandal connected to the highest office in the land.

Anna George, of course, instantly became the chief suspect in Saxton's killing. When the police tracked her down, she flatly refused to cooperate. She would not say where she had been the evening of Saxton's death, and waved aside all requests to reveal anything she might know about his death. Even after she was formally charged with murder, all she would say was that she wished to speak to her attorney. Even when her oldest, closest friends visited her in jail, she avoided speaking to them about anything concerning Saxton or his violently untimely end. (As for Eva Althouse, she claimed she was not at home at the time of the shooting. Under questioning, she admitted that Saxton had a key to her house, but insisted that this was merely so he could "water the plants and feed the birds" when she was away.)

William and Ida McKinley were also refusing to speak to the press. When they arrived in Canton for Saxton's funeral (which was kept kept private from everyone except family and a few friends,) the president and his wife had no public comment on their private tragedy. In those days before television and social media created a worldwide, unavoidable 24-hour-a-day spotlight, they were able to get away with this reticence.

Anna George may have looked like the most obvious of murderers, but prosecutors at her trial were faced with a discouraging lack of solid evidence against her. No one could prove she had been near the murder scene. DNA and all the other modern forensic tools had yet to be invented. Basically, all that could be said against the defendant was that she had a powerful motive. But motive is far from being enough to convict someone of murder.

Her lawyers mounted an aggressive defense, pointing out that the dead man was a habitual "destroyer of families," who had no doubt made many enemies among wronged husbands and discarded conquests. Anna George was hardly the only person who had reason to want Saxton dead, they pointed out. Who could deny the possibility that someone else took advantage of Anna's very public animus against Saxton by killing him themselves, knowing that she would be blamed?

The jury, after spending a night in deliberation, came to the only possible verdict: "Not guilty." Although George Saxton's death probably cannot be called a mystery, it remains officially unsolved.

William McKinley, of course, was also shot dead just three years later, giving Ida McKinley--who was, even before the double tragedy, a fragile woman subject to epileptic attacks--the unenviable distinction among First Ladies of having both her husband and her brother fall victim to assassins. 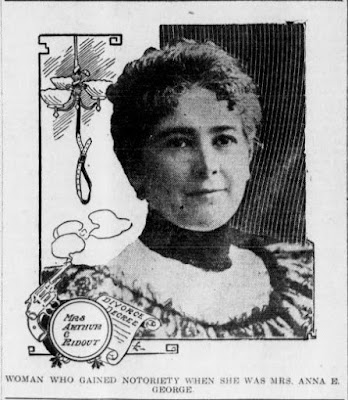 Anna George's life did not improve after her acquittal. Soon after the trial, she capitalized on her notoriety by embarking on a lecture tour, but it was an immediate failure. As a contemporary newspaper huffed, "the people decided almost unanimously that inasmuch as she had been vindicated by a jury of her countrymen, she should drop out of sight." In 1903, she married a Dr. Arthur C. Rideout, who proved to be a drunk and a gambler who was usually deeply in debt. Dr. Rideout hanged himself in 1906, apparently in the mistaken assumption that his wife would receive the money insured on his life. After her husband's death, Anna moved to New York, where she lived quietly until her death in 1922.
Posted by Undine at 4:56 AM