To Meet Mr. and Mrs. Hamilton

Longtime readers of this blog are aware that this site is meant not to be just entertaining or educational, but inspirational. Moral Uplift is my middle name. So naturally, I'd be sadly remiss in my duty if I failed to introduce you to Mr. and Mrs. Robert Ray Hamilton. This couple symbolized Strange Company Family Values at its finest.

Robert Hamilton was born into that peculiarly oxymoronic environment known as "American Royalty." This descendant of Alexander Hamilton was the son of famed General Schuyler Hamilton. He was a successful lawyer, a popular clubman, and a member of the New York Assembly. In short, he epitomized the genteel East Coast blue-bloods of the late 19th century. Hamilton could have stepped out of an Edith Wharton novel. 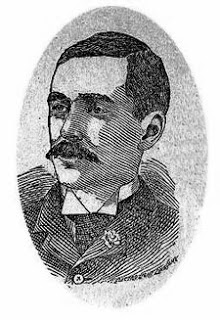 What caused his life to careen from Whartonian elegance to Illustrated Police News farce was his marriage in January 1889 to Eva Mann. Mann, a former star of the May Howard Burlesque Company, was about the last person one would imagine someone of Howard's status taking as a consort. The wedding becomes a little less surprising when you learn it was of the "shotgun" variety. Hamilton evidently felt an illegitimate child would be more scandalous than an inappropriate wife. Perhaps he even fancied himself in love. 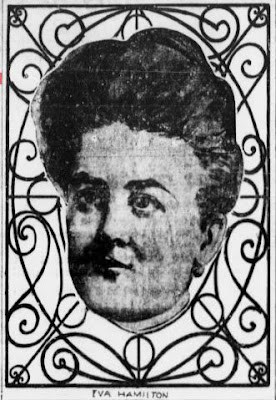 As Mrs. Robert Hamilton, the former showgirl was showered with fabulous jewels, a wardrobe of costly and stunning gowns, and an allowance of six thousand dollars a year. A few months after the marriage, she presented her husband with a daughter, Beatrice. The handsome newlyweds shone brilliantly at all the fashionable clubs, restaurants, and summer resorts. "Quite the Cinderella story," you are undoubtedly thinking.

In July 1889, the couple visited Atlantic City. Accompanying them was little Beatrice and the baby's nanny/wet nurse, Mary Donnelly. Unfortunately, tensions began simmering between Mrs. Hamilton and the nurse--for reasons that will become evident later--and the nanny was told her services would no longer be required. On the night of August 26, the Hamiltons got into a flaming row over Eva's demands for an increase in her allowance. Eva became so enraged that she picked up a dagger and lunged at her husband. Donnelly, hearing the clamor, rushed into the room and joined the brawl in Robert's defense.

This was a serious mistake. Eva instantly turned her wrath towards the nanny. "You she devil!" she shouted. "You are the cause of this. You'll never be about me again!" She plunged the dagger into the nanny's body.

Fortunately, Mary Donnelly survived the attack, which is more than one can say for the reputations of Mr. and Mrs. Hamilton. Eva was soon hauled before a grand jury, which led in September to her trial for attempted murder. Eva pleaded that it was a case of self-defense. The nurse, she declared, had attacked her, so what else could she do except thrust a knife into the woman's abdomen? The court proceedings revealed the remarkable details behind the Hamilton marriage, all of which kept newspaper readers agog for weeks.

First of all, calling Mrs. Hamilton a former "burlesque dancer" was a polite euphemism. Her real performances took place in one of New York's many brothels. It was at this establishment that she and Robert first made their acquaintance. Next, it emerged that since the marriage, Eva had been using Robert's money to support her old madam, a Mrs. Swinton, as well as Swinton's son, Joshua Mann. Mann had been Eva's lover before and after her marriage. (The defendant's animosity towards Donnelly evidently arose from the fact that she suspected the nurse of tattling to Hamilton about Eva's adultery.) The trial also revealed many juicy details about Eva's habitual violent temper. (The defense countered this by forcing the injured Nurse Donnelly to admit that she herself had often "mauled" people, had threatened on a number of occasions to kill Mrs. Hamilton, she was drunk at the time of the stabbing, and she had once attacked her husband with an axe.) Allegations were also floated that the Hamilton marriage was invalid. It was said that Eva was really the wife of Joshua Mann, who was, people presumed, likely the real father of baby Beatrice.

As it happened, Beatrice's parentage was even more interesting than that. After the bigamy rumors surfaced, the police brought Mrs. Swinton and her son into headquarters for a friendly chat. Under interrogation, the pair admitted that Eva had never been pregnant at all. It was all a ruse designed to pressure Robert into marrying her.

According to Mann and Swinton, Eva had more trouble finding a fake baby than most women have producing the real thing. A suitable period of time after her marriage, Eva acquired a newborn girl via a cooperative midwife. Sadly, a day or two later the child sickened and died. Eva went running back to the midwife and got a second baby girl. This one also died within a few days. The increasingly exasperated Eva was given a third baby, but this loving pseudo-mother decided the dark-haired child "looked like a Dutch baby." Unacceptable. She returned the baby in disgust. Finally, Eva got her hands on a child who was both healthy enough and non-Dutch enough for her needs. She complained that she had had to pay the midwife $10 for the infant. [Note: Let us pause for a moment to ponder the easy availability of spare bogus babies in 19th century New York]

Upon hearing all this, Robert filed for an annulment. Eva, for reasons known only to herself, was shocked at the news.

At Eva's trial, the testimony of the three participants in the near-fatal fight provided a surprisingly strong case for self-defense. Mrs. Donnelly, it became clear, was more than a match for Godzilla. Courtroom observers predicted an acquittal. However, the many lurid revelations about Eva's past--not to mention present--told heavily against her. She was found guilty and sentenced to two years in prison. Many believed it was one of those cases where the jury disregarded the evidence and condemned the defendant on the grounds of violating public morality.

The verdict was an unpopular one, and efforts to secure Eva a pardon were ultimately successful. She was freed in November 1890.

While his annulment suit was still pending, Hamilton went West to escape the scandal. He hoped that while he was away, this unfortunate episode in his personal life would be forgotten, and he could eventually re-enter politics. Hamilton settled in Yellowstone Park, where he opened a hunting lodge with an old friend from Yale, John Sargent. On August 23, 1890, he went on a hunting trip.

He never came back. No sign of him could be found for some days, until a body was found floating in a remote area of the Snake River. The corpse was too decomposed for any definitive identification to be possible, but it was accepted to be that of Robert Ray Hamilton. It was presumed he had accidentally drowned. For reasons unknown, his relatives never had the body shipped to New York for burial, and it was quickly laid in a simple grave. These unusual circumstances kept the newspapers entertained with colorful rumors--still persisting to this day--that the ill-fated blue-blood had faked his own death, seeking to replace his unsatisfactory old life with a new Eva-free existence. One Henry Strong came forward insisting that he had met Hamilton face-to-face in Yellowstone days after the New Yorker was supposedly buried.  There are no other reasons to believe the allegation was true, but if it were, it would be the least nutty thing about this entire story. (For their part, Hamilton's relatives declared they were perfectly satisfied--one is tempted to use the words "absolutely delighted"--that he was dead.) A few years later, when John Sargent, (who had found Hamilton's body,) was indicted for killing his wife and child, speculation arose that he had murdered Hamilton as well, but this story appears to have been equally unfounded.

As Hamilton had not formally divorced Eva at the time of his death (or, if you prefer, "death,") she immediately filed suit for her dower's share of Hamilton's half-million dollar estate. These legal proceedings were enlivened by Eva's reluctant admission that Joshua Mann (described by the lady herself as "practically an idiot") had been her long-time lover, and that she had never given birth. The Hamilton camp countered by seeking to prove that her marriage to Robert had been bigamous, meaning she had no legal claim to his estate.

Although the courts twice ruled that Eva had indeed been married to Mann at the time she went to the altar with Robert Hamilton, she announced that she would not be giving up the fight. Hamilton's executors, feeling that no price would be too high if they could just see the last of her, gave her a cash settlement of $10,000. Unfortunately, this one-time Cinderella did not have a happy ending. Eva quickly squandered her money, took heavily to drink, and died in a New York hospital's charity ward in 1904. She was given a pauper's funeral in Mount Olivet Cemetery. As for little Beatrice, dubbed by the newspapers, "The Ten-Dollar Baby," she was taken in Hamilton's executor, E.R. Vollmer. Despite the revelations about her parentage, Hamilton was genuinely attached to the baby, and generously provided for Beatrice in his will. Unfortunately for the girl, in 1899 the courts ruled that Hamilton's estate did not have to give Beatrice the annuity granted by her "father."  I have been unable to find any further information about her.

Our little domestic tale had one final legal skirmish. In his will, Robert had stipulated that a fountain should be built in his memory. However, his family felt that his was a memory best quickly forgotten, and they opposed the project. Happily, these killjoys lost the battle, and to this day New York's Riverside Park boasts the "Robert Ray Hamilton Fountain." If you're ever in its vicinity, do go by and drop in a coin for me.

Just as my way of saying, "Thanks for the memories, Bob."
Posted by Undine at 4:42 AM