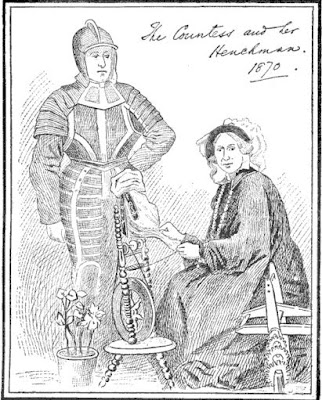 In 1857, a woman possessing the grand name of "Lady Amelia Matilda Mary Tudor Radcliffe" suddenly arrived in England--allegedly from Germany--and filed a formal claim to the supposedly defunct estates of Derwentwater. In her petition, she described herself as the granddaughter of John Radcliffe, only son and heir of James Radcliffe, 4th Earl of Derwentwater. Although history claimed that in 1731, John died childless at the age of 19, Lady Amelia maintained that was merely a ruse. In truth, she stated, John, in order to escape the persecution suffered by his family because of their support for the Jacobite cause, had faked his own death and moved to Germany, where he married the Countess of Waldstein in 1740. The couple had eleven children, all of whom died young with the exception of James, who became the fifth Earl of Derwentwater, and John James, who succeeded him. John James married the Princess Sobieski in 1813, fathering six children. The eldest, a boy, died unmarried in 1854. His will left his interest in the Derwentwater property to his only surviving sister: Our heroine, Lady Amelia, the rightful Countess of Derwentwater.

Lady Amelia had an impressive array of physical evidence to support her claim. She had in her possession various portraits, jewelry, family documents such as wills, deeds, genealogical records, and other heirlooms, said to be worth a total of £200,000. She added that she had originally possessed even more definitive proof of her family history, but she had sent these documents to Lord Palmerston, who refused to return them. She wrote many letters to Lord Petrie, the main living Radcliffe descendant, but he ignored her. Her petitions to the Trustees of Greenwich Hospital (who had been granted the Derwentwater estates in 1735,) were also dismissed.

In 1866, the undeterred Lady Amelia took her story to the newspapers. At that time, Britain was feeling a great nostalgic affection for the Jacobite "lost cause." Her romantic, if highly improbable, tale endeared her to much of the public. She was an intelligent and accomplished woman, with obvious artistic talent and an in-depth knowledge of the European peerage. Aside from her eccentric claims about her lineage, she appeared prepossessing and utterly rational. She had little trouble impressing many people as a genuine aristocrat. Many people were happy to contribute moral support--and, more importantly, money--to her cause.

Lady Amelia felt the time was ripe for action. In September of 1868, she turned squatter. With the aid of two brawny male supporters, she moved into the ruined Derwentwater mansion at Dilston. She was dressed for the occasion in a wide-brimmed straw hat boasting huge plumes of ostrich feathers and an Austrian military cloak. Hanging from her waist was a gleaming sword, the "sabre of her sires." Amelia hoisted the ancient Derwentwater banner, covered the roofless tower with a tarp, hung the walls with her Radcliffe family portraits, barred the doors, and dared everyone to make something of it.

Until this point, the Greenwich Hospital had chosen to ignore Lady Amelia, on the assumption that she would eventually just go away. However, her virtual theft of Radcliffe property, along with the considerable popular sympathy she had attracted, forced the Trustees to act. On October 1, they sent a representative, a Mr. C.G. Grey, to forcibly evict her.

This went about as amicably and smoothly as you might imagine.

Although they were successful in ejecting the Countess from her illegally-acquired castle--after ungallantly resorting to carrying the lady out on the chair she refused to vacate--this action backfired on them in the court of public opinion. When Amelia set up public camp on the road outside Dilston, she seemed to many to be a martyr, a distressed gentlewoman cruelly oppressed by heartless bureaucrats. 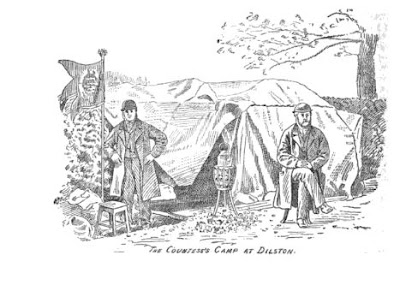 This support encouraged Amelia to press her campaign even harder. She insisted on collecting rent from tenants on Radcliffe lands. Early in 1870, she actually succeeded in auctioning off livestock and other property belonging to the Greenwich Hospital. On one occasion, some two thousand of her advocates set off a riot.

On September 27, 1871, Australia's "Sydney Evening News" carried a delighted description of the Countess on her travels:


The Countess of Derwentwater is a character. Recently she took a steamer at Jersey City for Liverpool, and the goods she carried with her wore thus inventoried :-One guitar, with two strings ; two old cane-seated chairs, one with two legs ; three empty four-gallon demijohns, uncorked two peacocks and a black-and-tan, in a box ; two broken children's cribs of mahogany, one without rockers ; one cross-breed hound of English birth ; one champagne bucket, covered with dust ; one broken painter's easel ; three rickety deckchairs, with varnish scraped off; one bag of tin ware; one six by three pedestal, without statuette, cracked ; four plain square Irish chests, two painted rod and two black, locks broken and hanging, each marked in white letters, " Countess D. ;" two mammoth chests, cross-tied with half-inch clothes-line, with same mark ; those contained the Countess' numerous hats ; fifteen very ancient-looking trunks, tied across the sides and double-knotted at the back ; one tray for mixing dough ; two tin berth room trunks ; one bundle loose clothing ; two portable hat racks, rather worn ; six cases of mysteriously packed bottles, supposed to be ale ; Huge crates of sauces, mixed pickles, and catsups, put up in every conceivable shape ; one copper-coloured work-box done up in oil ; seven heavy treble-twilled English travelling shawls tied with twine; thirteen gray woolen blankets made in form of" shake down;" seventeen packages of files of newspapers. The Countess wore on this occasion a green silk dress, a white crape shawl, a pair of white silk gloves, etc. When the labourers took hold of the box containing the lady's favourite peacocks and the black-and-tan, the curious crowd pressed down on the countess until her lace-trimmed bonnet took a peep skyward, and her costly shawl swept the rough boards of the pier. “Handle 'em gently; they’re my only loves!" she sharply cried, as she broke through the jeering crowd, and reached the foot of the gang plank. "This remarkable woman," says the Suit, “has a fine estate in the north of England, in the county of Cumberland, called Derwentwater. She has always been noted for her eccentric manner and antiquated notions. Her wardrobe is said to consist of over two hundred rich and elaborately trimmed dresses, girted with gold lace, fringes, and parti-colored velvets. She wears no diamonds, and but one plain finger ring adorns her hands. She claims to have among her apparel robes worn by some of the belles of the time of William the Conqueror, and when she travels, those are part of her personal luggage, carefully packed in the fifteen trunks mentioned, which are as antiquated as the dresses. Her appearance indicates an age not beyond forty, though possibly older. She will visit Scotland and Wales before returning to her home."


The Hospital Commissioners filed suit for the return of their property. Although Amelia contemptuously dismissed the writs she received as "scurrilous pieces of wastepaper," the court, predictably enough, agreed. Amelia was fined £500, plus costs. As she had no money, she was declared bankrupt and her prized collection of "family relics" was sold at auction to meet the debt. The sale earned only £275.

The Countess was hardly through fighting. In 1872, she was infuriated when one of the Derwentwater estates was purchased by a Joseph Laycock. In retaliation for this insult, she gave shooting rights over the property to various members of her dwindling band of supporters. This caused them all to be hauled before a magistrate. Although Amelia felt her august presence--regally attired in black velvet and a green tartan scarf--would intimidate the court into submission, her unlucky adherents were all fined.

Soon after this episode, an elderly man named Milburn put his cottage and the five acres of land he owned at the Countess' disposal. She arrived at her new little kingdom in a carriage drawn by four horses, accompanied by scarlet-coat postilions. She wore a gown of black and white satin, with a fetching hat adored with yellow streamers. She gave onlookers a speech promising many favors for her supporters once her claims to the Derwentwater estate were finally accepted.

Once again, the authorities felt the need to swat at this human fly buzzing around their heads. They sent her a notice of bankruptcy, which, as was her habit with all official documents that did not suit her, she ignored. This brought on a writ for her arrest. After considerable difficulty, the baliffs managed to bring her into custody and she was lodged in Newcastle jail. When she faced a judge one month later, her stubborn refusal to answer any questions about her finances caused her to be charged with contempt. She remained imprisoned until July 1873, when the court felt enough pity for her to allow her release.

Amelia's parade of legal setbacks, combined with her increasingly erratic behavior, began to turn her public image from a heroine into a laughingstock. Although her spirit was unbroken and her attempts to raid the Derwentwater lands continued, fewer and fewer people paid her any attention. She eventually died of bronchitis in 1880, penniless and virtually alone. Defiant to the end, her coffin was inscribed, "Amelia Mary Tudor Radcliffe, Countess of Derwentwater."

Modern-day researchers have had little trouble dismissing the valiant "Lady Amelia" as an impostor. Many of her "family relics" have been established as clumsy and obvious fakes. She herself likely painted her "family portraits." No genealogist has been able to find any record of her supposed mother and grandmother. She never provided any truly convincing proof of her identity.

Still, however, a certain mystery lingers around this curious woman. If she was not Amelia Radcliffe, rightful Derwentwater heir, who was she? What inspired her to stage such an elaborate, outlandish hoax?