The Ghosts of Antigonish 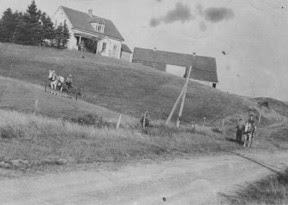 Most real-life ghost stories start suddenly, unexpectedly. Life is normal one moment, and awash in The Weird the next. A notable exception is one of Canada's most well-known hauntings, usually known as "The Fire-Spook of Caledonia Mills." This paranormal tale started with a lethal curse, which should have given everyone involved fair warning.

The site of our tale is the isolated farm of Alexander MacDonald, in the remote rural village of Caledonia Mills, Antigonish, Nova Scotia. According to legend, trouble began in 1900, when MacDonald's wife Janet got into a bitter argument with her mother, Mary Cameron. In her fury, Janet snapped, "I hope the devil in hell comes and takes you before nine o'clock tomorrow morning!"

Anyone familiar with such tales knows that when you summon the aid of Satan, it can be very hard to get the fellow to leave. Unnerving things began to happen at the MacDonald farm. Household belongings mysteriously vanished, later reappearing in remote spots on the property. MacDonald's horses and livestock would somehow be set loose from their stalls, and nothing MacDonald did seemed able to stop it. During the night, horses and cattle switched places, with the cows in the stables and the horses in the cattle areas. The animals' tails were found elaborately braided. The poor creatures were always left terrified after these occurrences. Heavy farm equipment would be moved about, as if by invisible hands. Passers-by often noticed a weird blue light playing around the barn.

In 1910, the MacDonalds adopted a two-year-old girl named Mary Ellen. She was the daughter of a local woman who could no longer take care of her. The child rarely attended school and had no outside friends or interests. She grew up in the morbidly private world of this increasingly eerie farm.

The family's private descent into hell became very public on January 6, 1922, thanks to what became known as "The Night of 38 Fires." Mary Ellen braved walking through a fierce blizzard to seek out the neighboring farm of Leo MacGillivray. Her family, she pleaded, needed help. Fires kept breaking out at all sorts of different locations in their home, and the MacDonalds were unable to control them.

When MacGillivray and other neighbors arrived at the MacDonald's, they saw immediately that these were no ordinary house fires. MacGillivray later said that the place would suddenly become illuminated as if by a short circut on a high-tension wire. Then, bluish blazes would suddenly appear on the unlikeliest places--including soaking wet papers, rags, and wood. The wallpaper would periodically shoot out flames. As soon as the fires were extinguished, new ones would pop up to take their place. There was a strange lack of heat to the fires. No gasoline or other flammable materials were inside the house.

Perhaps the most curious occurrence was reported by two neighbors, Michael McGillivray and John Kenney. One day, as they were approaching the MacDonald home, they saw a hand grasping a piece of white cotton projecting from an upstairs window. The white cloth was waved three times, as if giving a signal, before it disappeared. Residents of the house swore that no one had been upstairs at the time.

The MacDonalds were exhausted from battling the unremitting blazes, and in a state of confused panic about what was happening to them. By January 12, the family, terrified that they might be burned alive, had no choice but to flee. They took shelter with the MacGillivrays.

Naturally, word soon spread of the peculiar events at the MacDonald farm. Harold Whidden, a reporter for the "Halifax Herald" was assigned to visit the farm. With him was a retired police chief, Peter Carroll. The men spent two nights at the farmhouse. They were spared the mystery fires, but reported hearing footsteps and other eerie noises. A...something angrily slapped them on their arms and faces.

Whidden, increasingly convinced that the farm was plagued by paranormal forces, turned to automatic writing. He soon felt his mind "controlled by some unseen power. Every movement [of his hand] appeared to be dictated or automatic. The writing was not of my own violation."

The invisible tormentors were asked, "Who set the fires in Alexander MacDonald's house?"

It was then asked, "Did you slap Harold Whidden on the arm the second night he and Mr. Carroll were in the house?"

Whidden wrote "Yes," explaining, "Because I wanted to show him that the mystery fires were caused by spirits!"

Whidden wrote for over two hours, receiving what he believed were many different messages from the "spirits." However, he never revealed their full contents, explaining that most of them "were of the utmost significance and not a few of them were of an entirely personal character." Whidden concluded, "I will...believe to the hour of my death at least, that the fires in Alexander MacDonald's house and the mysterious unfastening of his cattle were caused by spirits." Carroll agreed. He later described the MacDonalds as "straightforward, substantial and God-fearing...I firmly believe that neither the fires nor other strange occurrences about the farm were the cause of human hands."

So...what did cause them?

Walter Franklin Price, a scientist at the American Research Society of New York, believed he had the answer. He spent nearly a week at the MacDonald farm, and returned convinced that Mary Ellen was responsible for the fires. He wrote that Mary Ellen may have been in an "altered state of consciousness" and in the grip of a "discarnate intelligence" when these seemingly occult acts were committed. However, he absolved her from conscious guilt, writing that "I am emphatically of the opinion that the girl was not mentally culpable. She is mentally exceedingly young for her years and witin the past year has had singular 'dream' states, from which it was difficult to rouse her. It is very probably that she was the victim of altered states."

Dr. Price did not bother to explain why, if such was the case, Whidden and Carroll experienced weird phenomena when Mary Ellen was nowhere in sight. 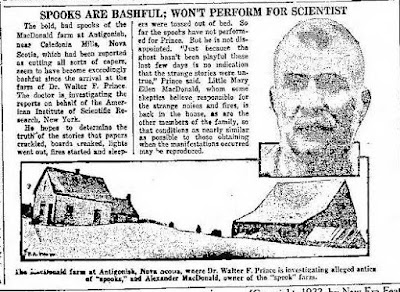 An even less likely theory was offered by Edward O'Brien, of St. Francis Xavier University. O'Brien proposed that the so-called "Fire-Spook" was really due to wireless currents that ran through the area from nearby radio towers. The commotion with the livestock, he scoffed, was just Mary Ellen playing pranks on her gullible family. No one else, however, managed to take O'Brien very seriously, particularly after Guglielmo Marconi himself publicly dismissed the idea.

Poltergeist tales rarely have a happy ending, and sadly, this was no exception. Neighbors indignantly refuted Dr. Price's suggestion that Mary Ellen was in any way to blame for the chaos that had engulfed her family. They described her as a sweet, good-natured girl who loved her adopted parents and was incapable of playing such sadistic "pranks." The strange events at her home, coupled with the common tendency to place responsibility for them on her shoulders, proved to be too much for Mary Ellen. In October 1922, she was temporarily committed to an insane asylum. After her release, she eventually married, and did her best to put the horrific experiences of her youth behind her. The MacDonalds abandoned the farm for good. Some years later, it mysteriously burned down, and no one showed any inclination to rebuild on the notorious plot of ground.  To this day, there is a belief that the land where the farm stood is "cursed," and that if anyone removes any item--no matter how small and insignificant--from the site, the "Fire-Spook" will prey on their home, as well.

When asked what he thought of the events at the MacDonald farm, Harold Whidden would invariably answer, "It is beyond me. The solution of the mystery may be quite simple, but to me it is a very strange affair, and I would not offer a suggestion."

That may have to remain the final word on the matter.
Posted by Undine at 4:43 AM