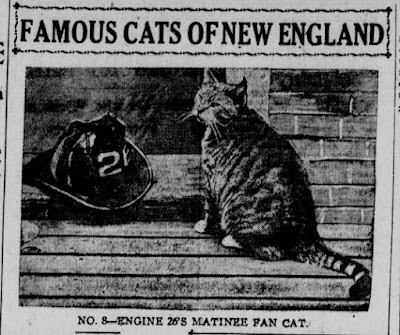 This eighth installment of the "Boston Post's" "Famous Cats of New England" showcases a feline with admirably versatile interests:


Fire chiefs may come and go, but up around Engine 26 on Mason street is looks as if Tige would go on forever. It is nearly 10 years since Tige adopted the fire station there.

If he prefers to see the show from behind the scenes no one ever objects. "OK on Tige" is the word passed by the stage hands. Even the dressing rooms have open house to Tige, and he has sat round-eyed while many a little dancer has been busy with the lip stick and the rabbit's foot.

Just now he is terribly disgruntled because of the extensive repairs going on at the old Mason street station. He misses the horses he used to know, and whenever a horse stops anywhere along Mason street Tige chums up to him, rubbing his head against his feet.

When the froth of the theatre and the excitement of the fire palls he strolls into the school committee rooms next door in search of something solid.

He gets a good line on politics, too, by strolling through the lobby of the Adams House each evening. Personally known to Governor Coolidge, he occasionally sits beside him while he smokes.

Exclusive Tremont street shops back on Mason street near the fire station, and Tige tours them from time to time. From buyers to bundle girls, they know him, and even the office doors of firm heads are not barred against him.

He sleeps impartially on every bed in the fire house dormitories. He sits up on the apparatus when the men are working around and cleaning it. He curls up on the cushioned chair by the captain's desk and regards it as so much his property that, rather than disturb him, the captain has been known to go off somewhere and borrow a less comfortable seat.