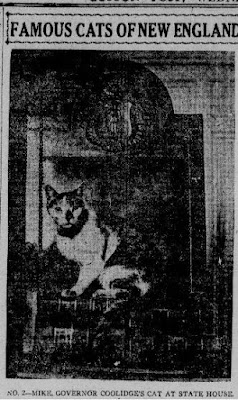 As I had previously threatened promised to do, here is more from the "Boston Post's" series, "Famous Cats of New England." This second entry pays tribute to Mike, right-hand-cat of Calvin Coolidge:


The First Cat in Massachusetts, "Mike," friend of Governor Coolidge and official rat catcher of the State House, saves the Commonwealth thousands of dollars every year.

Probably nowhere in New England breathes there a more democratic cat than State House Mike--he who walks intimately in the ways of the highest State executives, sleeps when he likes in the executive chamber and can rub his whiskers along the boots of the Vice-President-elect of the United States. The story of his remarkable rise from an abandoned-for-dead alley-way kitten to the stately boss of the State House is a story that every cat at present seeking out meagre existence from garbage boxes should know and draw courage from.

No Caesar, to forget the steps by which he climbed, is State House Mike. Not a day goes by that he does not call in the boiler rooms at the State House, there to visit "the boys" to whom he owes his start in life. If summoned suddenly therefrom by the dictates of his fancy to the treasury department or the Governor's Council chamber it bothers Mike not a bit that his erstwhile white nose is smootched by a generous dab of coal dust. He goes at once in his boiler room overalls as it were.

Six years ago Harry Morton, boiler inspector at the State House, picked up Mike, a wee bit of a kitten in an almost lifeless condition and in mercy took him in. Some one of the boys brought a bottle of milk and in relays the man began to feed the waif with a spoon. For three days he lay without moving on a camp stool, the men nursing him along.

"His life wasn't worth two cents. Now the librarian says he saves us thousands of dollars," proudly declared Assistant Engineer Charles A. Thompson, the man who brings in Mike's "chow" each day and to whom the cat reports three times regularly for meals.

In those days the State House was over-run with cats. One, a black cat, was especially officious. As Mike rallied he began to rid the premises of these errant felines. The black cat held out firmly, but one memorable day Mike engaged him in battle. Bits of black fur strewed the marble corridors of the State House, but the cat they came from was seen no more.

Then came a threat on Mike's life. The Sergeant-At-Arms of the State House decreed there should be no more cats. He ordered Mike killed. Gloom fell upon Mike's many foster-parents in the engine room. Finally it was decided that Engineer Thompson should take Mike home.

Word reached the library. Down came the librarian in fury. The State House simply could not get along without Mike. Since his arrival not a single book has had to be rebound. No rat or mouse lived long enough to set tooth in the precious tomes that contained the State's records. Mike had seen to that. Previously hundreds of dollars had to be spent in repairing books.

So Mike stayed. On the occasion of his sixth anniversary with the State House the engineers presented Mike with a collar. On it is engraved "Mike--State House."

Every department is visited daily by Mike. While the Post reporter waited to interview him it was reported that he was calling in the treasury department. Presently, however, he appeared, inspected the Governor's chamber thoughtfully and then jumped up in the Governor's great high backed official chair. Piled in its seat were the Laws of the Commonwealth of Massachusetts. Mike sat down on them. He rubbed his nose a bit on the Indian embossed in the State seal that ornaments the back of the chair. He played with his paw for a minute with a blue ribbon that trained from an official seal on a document that lay on the Governor's desk. Then he looked disdainfully at his visitor. Mike does not like strangers.

Very straight backed and dignified he sat up in the big chair. Only the coal smootch on his nose detracted a bit from the dignity. Without enthusiasm he consented to have his head scratched. he did not abandon his chair. Neither did he "warm up" or express any pleasure.

Whenever the Governor is away Mike holds down the official chair. He seemed to realize that Governor Coolidge had gone home to Northampton to vote and that it was up to him to take his place. When the Governor is at his desk Mike usually contents himself by curling up and going to sleep on the rug near his feet. Occasionally he jumps on the desk, though, to see just how the day's work is coming along.

Mike's particular sanctum, where he likes to take his cat naps and where he spends that part of the night that is not spent in rat hunting is the engine field, in the boiler room. He curls up by the dynamo of the engine when it is not running. It is very warm there.

"The cat who made good." "The cat who is true to his old pals." "The boss of the State House." "Best mouser in Boston." These are the terms Mike's rooters use.

I was unable to find out any more about Mike, but hopefully he continued to live a long and happy life at the helm of the Massachusetts ship-of-state.
Posted by Undine at 4:36 AM