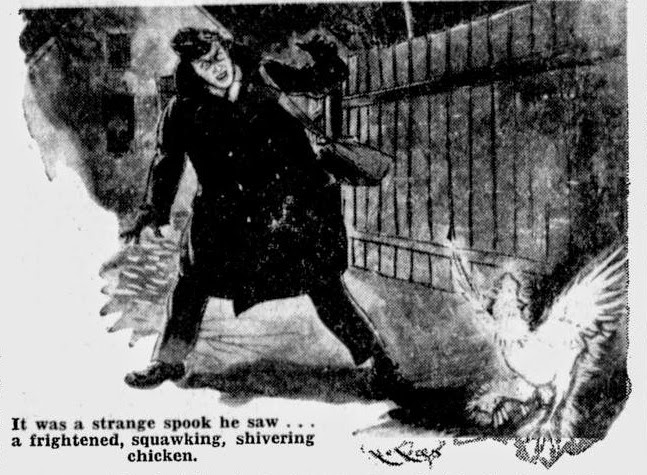 My friends, I cannot tell you how proud I am to have the opportunity to introduce you to the Shivering Chicken Ghost of Highgate.

It was a night when ghosts might well be abroad. Torn and ragged clouds were blown across the sky by a chill wind and when they broke there was a sudden glimpse of moonlight.

All the houses around Pond Square, Highgate, seemed black and huddling together.

The shadowy moon lit them fitfully, but there was no other light. It was wartime--December, 1943--and the ancient, elegant square, like the rest of London, was blacked-out.

Yes, it was a good night for ghosts. And Pond Square, with its old, old memories, was a good place to find them.

If Aircraftman Terence Long was thinking of such things as he walked across the square, however, he could hardly have imagined a stranger spook than the one he saw.

As he walked under the shadows of the old houses he heard hoof-beats, the sudden pulling up of a carriage, and then a frightening shriek.

He stopped, his eyes trying vainly to pierce the darkness.

Then the moon showed the itself, and there in front of Long's goggling gaze, was the ghost--a chicken!

It was a frightened, squawking fowl, dashing about in frenzied circles, half-running, half-flying--and shivering!

There was no doubt about it, the bird was shaking with the cold, trying, it seemed, to warm itself by flapping its wings.

Aircraftman Long stood watching its antics, thinking that he should have declined that final drink at the house of the friend he had been visiting.

He closed his eyes tight, took a deep lungful of the chill air, then looked again.

Long took another quick look around him. Then he ran. He ran hard through the square.

At the corner he collided with a figure clad in what his panicked mind first thought to be a shroud.

It turned out to be the substantial figure of a fire-watcher, wearing a cape.

He thought that sounded lame, but all he wanted to do was to put as much distance between himself and the square as he could.

Then a thought struck him. He had gone only a yard or so, and he turned back to the fire-watcher.

"Don't think I'm tipsy, or anything," he began. "But I've just seen a chicken that looked like a ghost. It had hardly any feathers and it was dashing about as though it were freezing."

The man did not laugh. "You've seen it, too, eh? You're not the first one. That fowl has been seen around these parts for years; for as long as I can remember."

Long looked slightly relieved. "Have you seen it?" he asked.

The fire-watcher shook his head. "No. But a month or two ago some of the people round here saw a man actually trying to catch it.

"He chased it all round the square--probably thought it would help out his meat ration. It jumped and flew all over the place with this chap after it. THEN IT WENT STRAIGHT THROUGH A BRICK WALL."

The airman stared. "Straight through?" he said.

"Straight through. That was enough for the chap. He turned and ran for all he was worth."

"And I don't blame him," said Long fervently.

The shivering chicken which Long and the man who fancied it for his table had seen was no newcomer to the Highgate square. It might be said that it was the neighborhood's oldest inhabitant.

The story goes back 300 years, to when Francis Bacon, renowned philosopher, statesman, essayist and one-time Lord Chancellor of England, was getting old.

He had, in his day, been among the greatest in the land, but, like all powerful men, he had enemies.

By 1621 these enemies had succeeded in banishing him from public office with stories of treason.

With his retirement from public life, Bacon gave himself to his writing and to his scientific experiments.

For six years he worked industriously and happily. Then, in March, 1626--when he was 65--he was riding in his carriage through the snow-covered streets of Highgate.

It was a bitter afternoon, getting dark, and with the threat of more snow in the black sky. But Bacon, as ever, was working on a scientific problem.

It had occurred to him that the grass beneath the snow always seemed remarkably fresh and green. He wondered if the snow had any properties as a preservative.

He was the sort of man who never left anything untried once it had occurred to him. And there was no time like the present.

He ordered the coachman to stop in Pond Square. Then, wrapping the cloak about him, he stepped from the carriage into the snow.

The surprised coachman was told to go and purchase a chicken. He did so and the bird was killed, partly plucked and cleaned on the spot.

Then Bacon took the warm carcass and stuffed it with snow. Then he placed it in a bag and packed more snow tightly about it.

To the wondering locals who had gathered around he said: "I think I have found the answer to putrefaction."

They were none the wiser, and they had no time to question him further, for suddenly the old man was seized with a violent shivering and coughing.

He collapsed in a heap in the snow.

The watchers picked him up, and under the coachman's direction took him to the house of his friend Lord Arundel, which stood at the corner of Pond Square.

There he died a few days later. The frozen chicken had cost the life of a great Englishman. [Ed. note: Wasn't it the other way around?]

So the shivering chicken came to Pond Square. The residents, and some of their neighbors in that part of Highgate, have long known about the strange spectre.

Mr. and Mrs. John Greenhill, who lived during the war in the square, saw the shivering chicken on many occasions.

"It was a big, whitish bird, and it used to perch on the lower boughs of the tree opposite our house," said Mrs. Greenhill. "Many members of my family have seen it on moonlit nights."


I'm starting to think that I live to blog about things like this.