Easter is seen as the most benign of holidays, conjuring up heartwarming images of church services, Easter bonnets, chocolate treats, sweet rabbits, playful little children searching for colorful eggs. Nothing but peace and innocent merriment everywhere.

Well, not at this blog, buddy. Here's a taste of Easter, Strange Company style.

First of all, consider the horrifying world of Easter Bunnies Gone Bad. From the "Milwaukee Sentinel," April 16, 1981:

The big, fuzzy and white rabbit, known to her friends as Janice Holsinger of Palmyra, was hurrying between afternoon parties at nursery schools Wednesday when she was pulled over.

Officer Thomas Capello was unmoved by the bunny's insistence, like the White Rabbit of Wonderland, that "I'm late, I'm late," Mrs. Holsinger said.

"This is the first time I've ever arrested a bunny," was all Capello said, handing her the $70 ticket.

It gets worse. Sometimes, the Easter Bunny turns drug trafficker. From "The Sunday Hour," April 6, 2007:

An East Hartford man was arrested after police found him with a plush Easter bunny that had been stuffed with marijuana.

Ian Lawrence, 25, was pulled over by police on Wednesday after allegedly running a red light. Police found 19 grams of marijuana in his car, most of it inside the stuffed rabbit, police said.


An item in the "European Stars and Stripes" on March 31, 1991 revealed that the Easter Bunny's a deadbeat dad. And considering how rabbits multiply, you can guess what horrifying news that is. It seems that a man portraying the bunny at an East Traverse, Michigan mall was arrested (while on the job!) for non-payment of child support. We are told that "A bystander filled in until an understudy could be found."  Let's just hope the bystander was not Ian Lawrence of East Hartford.

Pittsburgh--Peter Rabbit of Pittsburgh may have to spend Easter in the Allegheny County jail.

John Henry Nash, alias Peter Rabbit, surrendered to federal marshals Wednesday after a bench warrant had been issued for his arrest. He was convicted last May of a wagering tax violation and fined $1,050.


Oh, and those eggs he'll be leaving for your kids? They're hot merchandise. The "Milwaukee Sentinel," March 26, 1921:

The Easter bunny has turned burglar.

The famous rabbit has been reduced to burglarizing in order to meet the demand for painted Easter eggs, which he will be called upon to "lay" in Milwaukee homes by the time the Easter egg hunts begin Sunday morning.

The first report of stolen eggs comes from George Ponik, 482 American avenue, who found the lock of his garage broken and fifteen dozen eggs missing early Saturday morning. The work is reported to look very much like that of a hard pressed Easter bunny.

If it is found that the rabbit is actually to blame, it is unofficially stated that no warrant for his arrest will be issued. Realizing that the demand for Easter eggs to be laid under parlor cushions and in out-of-the-way corners, for the young treasure seekers to unearth Sunday morning, is particularly great this year, it is purposed to overlook the misdemeanor on the part of the Bunny, if the theft was actually committed by him.

Mr. Ponik has reported his loss to the police, on the chance that some less popular burglar might have been responsible.


At other times, Bunny is not the criminal, but the contraband. The "Pittsburgh Press" of April 2, 1980, reported that burglars had entered four different stores in the towns of Bellevue and Avalon and stole four 4-foot-tall stuffed rabbits. Nothing else was missing. Bellevue Police Chief William Bracken theorized that the burglaries were "the work of some 'hop heads.'"

The "Reading [PA] Eagle" for April 6, 1931 reported that Joseph Hollensteiner and his wife came home the previous night to find two men looting the rabbit pens they kept in the garage. Hollensteiner caught one of the men, a Charles Sanders, but the other two escaped. Later, an associate of Sanders', John Olinger, was arrested after troopers discovered "a number of rabbits roaming around the shack where they picked up Olinger and they intend to return to that place to determine whether or not those animals were part of the Hollensteiner flock." Unsurprisingly, both men "were under the influence of liquor."

To some people, Bunny is the spawn of Satan. "The Miami News" for April 21, 1981, noted that three members of the Truth Tabernacle Church in Niles, Ohio, "were charged with disorderly conduct and violating open burning laws after a 5-foot stuffed Easter bunny was burned as a pagan idol on the church lawn." One of the accused called anyone with Easter bunnies "heathens and dummies who worshiped pagan gods."

Then there are Easter eggs. Those pretty, universally beloved holiday treats that are the most harmless objects in the world.

Unless, of course, Bunny happens to bring you the Easter Eggs of Freaking Death.

And, finally, what would the holiday be without an appearance by the Fortean Easter Hen of Minnesota? From the "Minneapolis Journal," April 15, 1903:

The goose that laid the golden egg didn't have much the start of the buxom Wyandotte hen which clucked thrice on Sunday morning and thereupon presented her owner, Augustus Johnson, 2819 Columbus avenue, with two bouncing Easter eggs.

They were not Easter eggs in that they happened to have their being upon that occasion or because they were destined for Easter consumption. They were thus rightfully denominated because they were as handsomely decorated as any hen fruit whose external appearance was developed by human hands at Easter, and the remarkable exception is that in this case the hen did it.

Mrs. Wyandotte not only laid the eggs, but with a wonderful sense of the eternal fitness of things, she ushered them into the world with such an artistic coat of several colors as to suggest that they had been hand-painted. The prevailing color is brown, flecked here and there with touches of red and blue.

A broken strip of dark brown extends in a perfectly straight line around the middle of the egg and from this radiate different hued dots, the whole being a color scheme which would do credit to the decorator's art. By closely scrutinizing one of the eggs, Mr. Johnson says that the letters of the word "Easter" can be discovered without any stretch of the imagination. The other eggs is of a less effective treatment, but is quite as much of a freak of nature.

"I am at a loss to account for these wonderful eggs," said Mr. Johnson, "and I have about come to the conclusion that the hen was inspired. She has always been of a peculiar temperament, much given to 'meditation fancy free,' and has steadily held herself aloof from the rest of the hennery. This is certainly a phenomenon which calls for scientific research and I shall be pleased to give all scientists interested all possible assistance in fathoming the mystery. Here is a chance for Ernest Seton-Thompson. I shall preserve these remarkable specimens for future reference, and it may be that we shall yet learn how to treat all hens and so control the pigment with which they color their feathers that they can make a specialty of Easter eggs." [Ed. note: Ernest Seton-Thompson was a well-known naturalist and wildlife illustrator.]


Well, happy Easter, gang. I thought it best to end on this note: 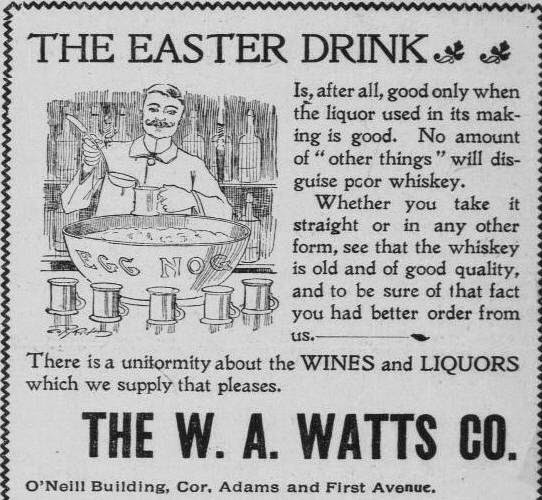 Much safer than those damn eggs.
Posted by Undine at 4:35 AM