The Witch of Staten Island 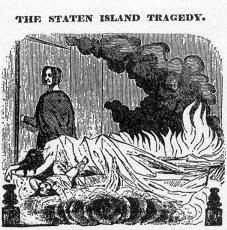 On Christmas night, 1843, the holiday peace in Staten Island, NY was shattered by the sound of fire alarms. The home of sea captain George Housman had erupted in flames. The head of the household was away on a fishing trip, but remaining in the home were his wife Emeline and their baby daughter Ann Eliza. George's sister Mary "Polly" Housman Bodine lived across the street with her father and her teenage daughter Eliza. (In 1824, Polly married an Andrew Bodine, but the marriage quickly soured, and they had been separated for many years.) When George was away, Polly would stay overnight with her sister-in-law to keep her company. This particular night, however, she was nowhere to be found. After the conflagration had been extinguished, some neighbors began investigating the damaged house.

They quickly discovered a whole lot more than they had been bargaining for. The home had evidently been ransacked, with a number of valuables missing. And in the fire-blackened house lay the remains of Emeline and little Ann Eliza. Their skulls had been smashed, Emeline's throat was cut, and a number of their bones were broken. The poor mangled remains were scarcely recognizable as human. It was believed they had been killed the night before the blaze. This was not a tragic domestic accident, but a case of brutal murder, followed by an attempt to cover the crime with arson.

The town understandably panicked. There was a fiend on the loose. Swiftly, the whispers grew about the presumed identity of the fiend. This small, inter-related community had one suspect, and one suspect only for this unspeakably foul crime: The seemingly devoted sister-in-law, Polly Bodine.

Perhaps the greatest puzzle about this crime is the lack of any plausible motive. Polly and Emeline had always been friendly, the dead woman and her husband had no enemies, and the amount of household goods that were missing scarcely explained such a ghastly double homicide.  The prosecution--despite what would prove to be nearly three years of trying--was never able to present a case that was anything more than suggestive of the accused's culpability. And yet, there was something about Polly Bodine that enabled so many who knew her to feel morally certain that she had cold-bloodedly butchered an innocent kinswoman and her year-and-a-half old child.

The local District Attorney, Lot Clark, pieced together the events of the hours leading up to the double murder. On Christmas Eve morning, Polly left Emeline's home to return to her father's residence. During that day, neighbors saw Emeline in and around her house, doing her usual chores. This proved to be the last time anyone definitely saw her alive. That evening, a woman who lived next door saw a woman she presumed was Emeline exit her home. Soon afterwards, Polly's daughter Eliza went to see if Emeline wanted anyone to spend the night. There was no answer. Eliza explained later that she assumed Emeline was spending Christmas at the home of her family, the Van Pelts.

On Christmas morning, a cousin went to Emeline's house on an errand. He repeatedly knocked on the door, but received no reply. Polly emerged from her father's house and told the boy that Emeline had gone to the Van Pelts. She then walked off and boarded a stagecoach bound for the ferry that would take her into New York City. Polly's 16-year-old son Albert was the live-in apprentice to a Manhattan druggist, George Waite. She later claimed that she had spent all of Christmas day and night with her son and his employer, but Albert himself testified that he did not see his mother after about four p.m..  On that same day, a number of items belonging to the Housmans were pawned in various shops throughout the city. All these pawnbrokers later identified the woman who brought them these household goods as Polly Bodine.

Emeline's home was silent for the rest of Christmas day. Around four in the afternoon, a neighbor riding by saw two strangers--a woman and a man in a Spanish cloak--standing in the Housman's yard. As he passed them, the man left, while the woman entered the house. The identity of these two people remains a mystery.

The next report we have of Polly's movements is early on the morning of December 26th. A chambermaid on the Staten Island ferry saw her sitting quietly on the boat. Polly ordered a breakfast of pie and a glass of gin, which made a memorable impression on her waitress. "I thought it marvelous that a woman would ask for gin," she recalled.

Marvelous indeed.  Even by modern-day standards, the sight of pie and gin at 6 a.m. would be enough to daunt the stoutest heart.

At 10 a.m. that morning, Polly was at Waite's drugstore when a Housman cousin, Freeman Smith, came to tell her of the murders. Polly--showing all the appropriate signs of shock and grief--immediately returned with him to Staten Island.

Someone else had just arrived at the Island, as well: George Housman, who was greeted with the news that his wife and child had been bludgeoned to death.

After the coroner's inquest, Polly was arrested for murder. It was claimed that her motive for this terrible crime was to steal the thousand dollars George had given his wife before he left. (The money was found still in the outhouse where Emeline had hidden it.) Polly was placed in the county jail alongside her son's employer, George Waite, who was suspected of being her accessory. On January 6th, Polly gave birth to a stillborn child. Waite was the father.

Polly went on trial on June 23, 1844. She was, to put it mildly, a controversial defendant. There was an immense, and extremely acrimonious, public interest in the case, with the citzenry hotly divided into "She couldn't have done such a thing" and "She must have done it" factions. Extra ferry and stagecoach runs had to be set up from as far away as New Jersey to handle the rush of spectators anxious to get even a glimpse of the woman who was becoming famed as "The Witch of Staten Island."

The wheels of justice did not turn smoothly during her trial. The Staten Island area was so interbred that Polly and her alleged victims were related by either blood or marriage to virtually everyone involved in the proceedings, a circumstance that guaranteed that Polly would not get an objective hearing. For some townspeople, blood ties trumped blood spilled. The most notable example was George Housman, who raised a good many eyebrows by declaring, "I can get another wife. I can get another child. I can never get another sister." The Van Pelts and their connections, on the other hand, would have been happy to lynch the defendant on the spot. Her many rumored sexual "sins"--most notably her long-time affair with Waite, which had caused her to undergo numerous abortions--led many to see her as a woman capable of any wickedness. For her part, Polly accused her ex-lover George Waite of the murders.

In such an emotionally-charged atmosphere, it was almost inevitable that Polly's trial ended in a hung jury. There was one holdout vote for "innocent"--a juror who insisted that he could not vote for a conviction on circumstantial evidence unless there were four--not one, not two, not three, but four--eyewitnesses to the actual murder. He dubbed this novel bit of do-it-yourself jurisprudence "circumstantial evidence in the fourth degree."

It was prudently decided that "in consequence of local and family interests, etc.," her second trial should be held outside Staten Island, and the judicial circus went on the road to Manhattan. Meanwhile, as no evidence could be found against George Waite other than his prior relationship with the accused, he was quietly released.

New Yorkers enthusiastically appreciated the new show that had landed in their midst. P.T. Barnum's Broadway museum installed a wax effigy of "The Witch" in the act of butchering her niece and sister-in-law. This tasteful little display was immensely popular. Barnum depicted Polly as a wizened, evil-looking old hag. The real Mrs. Bodine--a handsome woman in her mid-thirties--was outraged by this insult. Her lawyers believed she was more disturbed by Barnum's slur of her personal attractions than by any of the murder accusations. The courthouse where Polly's trial was held saw overflow crowds every day. The local papers devoted entire editions a day to the scandalous crime. Blood sells even more than sex.

Shortly before Polly's first trial, a Philadelphia paper contained a contemptuous observation by a rising young short-story writer, poet, and critic named Edgar Allan Poe: "The trial of Polly Bodine will take place at Richmond, on Monday next, and will, no doubt, excite much interest. This woman may, possibly, escape;--for they manage these matters wretchedly in New-York."

Poe was an excellent criminologist. Polly's second trial was an even more muddled affair than the first. A number of witnesses changed their earlier stories, and the pawnbrokers who received the silverware now professed that they were unable to identify the defendant as their customer. Despite all this, public opinion was so whipped up against the defendant that the jury had little difficulty returning a guilty verdict.

Polly's lawyers immediately appealed the verdict to the State Supreme Court. These justices agreed that the defendant had received an unfair hearing, and ordered a retrial. As a measure of her notoriety, over six thousand potential jurors had to be interviewed before the lawyers could find ten men willing to say they were unbiased about her guilt.

The lawyers for the defense were able to use this fact to obtain yet another change of venue, and the Bodine retrial wound up being held in Newburgh, New York. For all the suspicion and personal dislike Polly had inspired, there was a surprising dearth of solid evidence against her, and her attorneys were able to demolish many prosecution witnesses during cross-examination. This third jury panel, who prided themselves on being untainted by the emotional frenzy that characterized the earlier trials, very quickly acquitted her. Her first words on being found "not guilty" were "Can I sue Barnum now?"

The DA finally gave up the fight, and Polly Housman Bodine was safe from the law, if not from the even more merciless verdict of public opinion. Polly was virtually imprisoned by the sheer enigma of the case. To this day, no one knows why she would slaughter Emeline and her child, but on the other hand, if she didn't kill them, who did?

Polly returned home to Staten Island, where she led an increasingly reclusive life until her death in 1892. She never lived down the common belief that she was an unusually cruel murderer who had been very, very lucky. At her funeral, the only mourners were her son and daughter, who had remained devoted to her to the end. And the deaths of Emeline and Ann Eliza Housman remain forever unsolved.

Officially, at least.
Posted by Undine at 4:55 AM