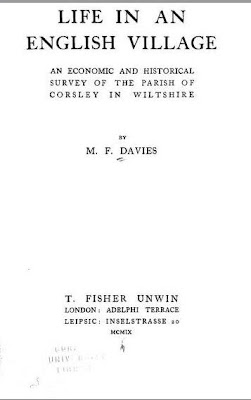 Maud Frances Davies was a talented, energetic woman, with an earnest desire to aid mankind by studying it. An early adherent to the theory that society could not progress without self-analyses, her carefully researched writings about the early 20th century English poor are considered important pioneering works in the field of sociology. Her books still provide valuable source material for modern historians.

Her life was pure public service. And her death was pure Charles Fort.

The mystery of her final days began early in 1913, when the thirty-seven year old Davies sailed for her London home from a vacation spent traveling over the world. Unfortunately, we have no details about this trip that might shed light on her extremely peculiar death, but on the boat to England, something was clearly amiss with the usually cheerful, level-headed woman. A shipmate, Mrs. Margaret Davies (no relation,) later testified that Maud became feverishly ill, complained of headache, and began acting strangely. The day before they arrived in England Maud asked Mrs. Davies, “What does this mean? The boat is full of spies? Haven’t you seen them?” When the ship reached Liverpool on January 31, Maud asked the other woman if she could accompany her in the train to Euston, and Mrs. Davies, concerned about her friend’s condition, agreed.

On the train, Maud told her companion, “I hope your having been seen traveling with me and speaking to me won’t bring you any trouble.” She asked for Mrs. Davies’ address, saying, “I may need it. You may be called up as a witness.” Later in the trip, Maud commented, “We are getting very near London now.” She took off her coat and left the compartment. Mrs. Davies never saw her again.

Maud Davies’ movements are a mystery until two a.m. on February 2nd, when a railway worker found her body in a tunnel on the Metropolitan Railway near Kensington. The cause of death was decapitation, presumably when a train ran over her. The strangest of the many strange details of her end was that the coroner found that while she was still alive, a small, sharp object, such as a hatpin, had made numerous puncture wounds over her chest. They were all in the same spot, which made it unlikely that they were inflicted during a struggle. All he could surmise was that she had made the wounds herself.

The inquest into her death was, to put it bluntly, useless. Her friends and relatives all agreed that Davies was a happy, well-balanced person who had no reason to commit suicide. The autopsy showed that she had a lung ailment that would have accounted for the illness Mrs. Davies noticed. However, it was believed that her sickness would hardly have been enough to make her temporarily insane.

Everyone was stumped. No signs of foul play were found, yet it strained belief that, even in her sick, feverish condition, she would kill herself, let alone in such a bizarre and brutal manner. Were her ominous remarks to Mrs. Davies about spies and needing “witnesses” just the ramblings of a sudden mental illness, or during her voyages, had she developed some genuine reason to fear for her safety?

The jury at the inquest returned an open verdict. And open the mystery has remained.