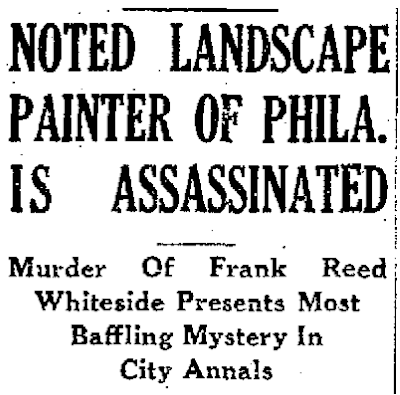 On the night of September 19, 1929, a prominent artist, 63-year-old Frank Reed Whiteside, heard a knock on the front door of his Philadelphia home. When he opened it, someone shot him dead and disappeared into the darkened streets of this quiet neighborhood.

The motive for the shooting, let alone the identity of the killer, has remained a complete mystery. Twelve days after Whiteside’s murder, an artist’s model named Leona Fishback was strangled and shot by her boyfriend, William E. Peters, who received a life sentence for the killing. Fishback was believed to have posed nude for one of Whiteside’s paintings, so it was theorized that perhaps in a fit of jealousy, Peters also murdered the artist. A year later, newspapers reported that a police inspector involved in the Fishback case claimed that Peters had confessed to the Whiteside shooting, but the alleged “confession” was never made public, and Peters’ lawyer denied his client’s guilt in the painter’s murder. In any case, Peters was never charged with that crime.

What places Whiteside’s murder even higher in the pantheon of The Weird is the fact that some years later, the home where he was murdered saw a second mysterious death. In 1946, the current resident of the house, “Philadelphia Inquirer” editor Howard R. Taylor, was found stabbed to death in his kitchen. At Taylor's inquest, the coroner's jury returned an open verdict, and as far as I can find, that murder has also remained unsolved.

After his death, Whiteside became a forgotten talent until 1971, when his art enjoyed a revival that gave him a posthumous popularity which endures to this day.

HMSY7DQBT8ZA
Posted by Undine at 4:55 AM