In 1877, William H. Smith informed the "New York Sun" that he had seen an angel hovering over Brooklyn.

Because who doesn't want to visit Coney Island? 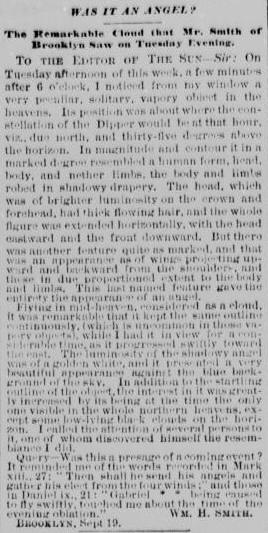 To The Editor of The Sun--Sir:

On Tuesday afternoon of this week, a few minutes after 6 o’clock, I noticed from my window a very peculiar, solitary, vapory object in the heavens. Its position was about where the constellation of the Dipper would be at that hour, viz., due north, and thirty-five degrees above the horizon. In magnitude and contour it in a marked degree resembled a human form, head, body, and nether limbs, the body and limbs robed in shadowy drapery. The head, which was of brighter luminosity on the crown and forehead, had thick flowing hair, and the whole figure was extended horizontally, with the head eastward and the front downward. But there was another feature quite as marked, and that was an appearance as of wings projecting upward and backward from the shoulders, and these in due proportional extent to the body and limbs. This last named feature gave the entirety the appearance of an angel.

Flying in mid-heaven, considered as a cloud, it was remarkable that it kept the same outline continuously, which is uncommon in those vapory objects, while I had it in view for a considerable time, as it progressed swiftly toward the east. The luminosity of the shadowy angel was of a golden white, and it presented a very beautiful appearance against the blue background of the sky. In addition to the startling outline of the object, the interest in it was greatly increased by its being at the time the only one visible in the whole northern heavens, except some low-lying black clouds on the horizon. I called the attention of several persons to it, one of whom discovered himself the resemblance I did.

Query--Was this a presage of a coming event? It reminded me of the words recorded in Mark XIII., 27: “Then shall he send his angels and gather his elect from the four winds;” and those in Daniel IX., 21: “Gabriel being caused to fly swiftly, touched me about the time of the evening oblation.”
Wm. H. Smith.
Brooklyn, Sept. 19.
Posted by Undine at 5:18 AM