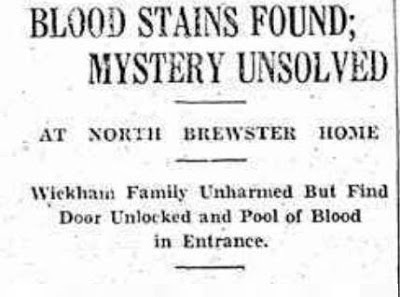 A bloody good mystery took place in the state of New York in 1933:

The town is greatly worked up over the mysterious blood stains and spots of blood found on the premises of Arthur Wickham at North Brewster, formerly the William Liddy home, early Tuesday morning. It is all so mysterious one hardly knows how to relate it, but the story Trooper Jagoda relates is:

The five year old daughter of the Wickham’s came down stairs ahead of her parents on Tuesday and astonished them by asking why the front door was open. Mrs. Wickham states emphatically she locked the door herself. On investigation Mr. Wickham received another shock to find blood on the porch in front of the door and going on more spots on the steps and ground. Later he discovered blood spots on the front door of his car on the driver’s side, also on the steering wheel. The car had been parked all night in front of the house.

Officer Schaffer was called and he discovered a good sized pool of blood on the back entrance as if a bleeding animal or person had paused for some time, but they stated that it would have to be a large animal to lose so much blood, as a cow or horse.

This was all worked on quietly on Tuesday. A check up on all doctors was made to find if any one had come for treatment, but no one had. A quantity of blood was taken to Dr. C.W. Marshall for analysis to determine whether it was the blood of a human or animal.

At this writing nothing more has been determined and it is quite a mystery.

Mr. Wickham stated that during the night their dog barked and was restless and he called out of the window for it to lie down and keep quiet. The dog was there and they found no blood on it or any sign of its being involved in any fight or near anything that had.

Several neighbors who have dogs recall that their dogs acted restless and barked but laid it to the barking of another dog. So Brewster is quite “het” up over this affair which certainly has some mysterious facts.


This is the only story I could find about this bit of random creepiness, so I have no idea if anyone ever presented a normal explanation for the incident.  Although I'm not sure what "normal" explanation you can find for waking up to find your house and car covered with blood.
Posted by Undine at 5:08 AM