Murder and the Mystic Mine 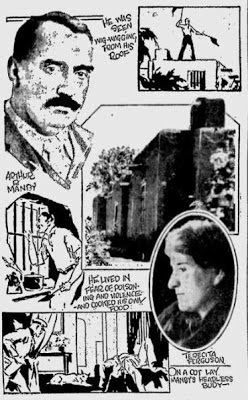 Taos, New Mexico, is in an area of the world that has hosted many strange happenings. One of the eeriest involves the so-called “Mystic Gold Mine” and the impressive body count associated with the site. The mine was in an area long believed by the native population to be cursed. As events were to prove, they very well may have been right.

The Mystic was found in 1863 by a man named Stone, who, two years later, took a John C. Ferguson as his partner. In 1882, Stone disappeared from the scene. Whether he left on his own free will, or, as seems more likely, he was murdered, is unknown.  Several of the mine's employees died in bizarre and unexplained ways.  One particularly luckless worker was found at the bottom of the mine shaft, decapitated.

However, The Weird only really kicked into high gear when, in 1895, an English mining promoter named Arthur Rockfort Manby entered into a gold-hunting syndicate with Ferguson and another miner named James Wilkinson.

The Mystic proved extremely profitable. It was only five miles away from the Aztec, then one of the richest gold mines in the world, and it was suspected that Manby—who seems to have been one of Nature’s born grifters—had somehow found a way of stealing nuggets from this other site. In any case, the trio quickly became exceedingly wealthy. And then in 1915, Wilkinson vanished. Although ominous rumors circulated about his disappearance, no one knew for sure what became of him. Not long after this, Ferguson ended his days in a mental hospital, tormented by visions of angry ghosts and decapitated bodies. His daughter Teresita inherited his share of the mine.

In 1921, Wilkinson, who had long been given up for dead, suddenly reappeared on the scene, only to quickly vanish again—this time for good.

In 1929, it was Manby’s turn to meet his fate. On June 30, a deputy sheriff came to Manby’s home to serve a judgment in a breach of promise suit filed against him. When he was unable to contact Manby, he returned three days later with backup and broke down the front door. When this search party broke into the house, they made a dreadful discovery. Manby’s decapitated corpse was discovered in a bedroom of his home. His brutally mutilated head was discovered in an adjoining room. The front door of the house, it was noted, had been locked from the inside.

Manby and his mansion had a sinister reputation long before his gruesome death. He had become a strange recluse who lived in great fear of something—fears that were certainly eventually justified. His 20-room estate had bars on every window and multiple locks on every door. He insisted on cooking all his own food, to guard against poisoning. His only companionship in the sprawling, lavishly-decorated hacienda was a pair of fierce Alsatian dogs who guarded him everywhere he went. He was periodically seen on his roof, using colored flags to send who-knows-what signals to who-knows-whom. All in all, his neighbors were quite happy to leave him to his own devices.

The coroner’s jury, faced with this grim and puzzling demise, responded with one of the most astonishing verdicts on record. They decreed that Manby died of natural causes. One of his dogs, crazed with hunger, then chewed off his head and carried the body to the other room.

This bit of absurdity was just too much for anyone to stomach. Manby’s brother back in England put pressure on Washington to arrange a less deranged investigation into Manby’s death, with the result that a detective, Henri Martin, was dispatched to Taos. When he had the body exhumed, he discovered that the gold tycoon was riddled with shotgun bullets. The assassin then, for some unknown reason, carefully removed the head. The mystery of who shot and decapitated Manby—not to mention the puzzle of what that coroner’s jury was thinking—remains unsolved to this day.

Martin received some interesting, if ultimately unhelpful, information about the other peculiar deaths associated with the Mystic Mine. He discovered that over the years, at least half a dozen men associated with Manby had been mysteriously murdered--with several of them being decapitated.  A woman who had been Wilkinson’s housekeeper told the detective that her employer had been killed by his business partners. She claimed the body—like Manby, full of bullets and decapitated—had been placed in her room one night. She directed Martin to a certain place where she said Wilkinson was secretly buried. The spot was exhumed, and a skeleton was found, but it was uncertain if it really was the vanished Wilkinson. At least nine other beheaded bodies were found in that area. Martin also heard from locals that Ferguson, who had become a drug addict, was so terrified of…something…that he killed himself in the asylum.

It also came out that a few years before, Manby and Teresita Ferguson—who had a very close relationship until, so she said, he cheated her out of all her money--organized a shadowy organization known as the “United States Civil Secret Service Society.” Men were persuaded—or, more often, compelled--to invest in this group, which was presented as a clandestine society working with the U.S. Secret Service. In return, investors would share in the reward money earned when the organization captured criminals. In reality, of course, it was one of Manby’s many swindles. However, the general fear that the group was Manby’s private criminal gang, responsible for many unsolved robberies and murders, scared many people from seeking justice against him. (The hints that the "society" also practiced black magic undoubtedly added to the general unease.)  Perhaps, it was suggested, one of the men he had defrauded with this scheme finally got his bloody revenge.

Or perhaps the killer was one of the many other people Manby had cheated during his astonishingly busy career? Or did Teresita Ferguson, the one person to come away from the Mystic alive, have something to do with the death of her former business partner/lover? And what of Margaret Waddell, the Los Angeles woman who successfully brought the breach-of-promise suit against Manby? Through his typically shady, complex business maneuvers, he engineered it so she would be unable to collect her $12,000 damages. Did she obtain a less lawful payback?

Or was this mutilated body really Manby’s? Some observers insisted the skull found in his house was far too small to be his. The body was too decomposed to permit a positive identification. Many were convinced that the old crook, ever fearful for his safety, staged his own “murder,” and escaped to a new life. This idea has been largely ignored, but with a story like this, it’s hard to believe anything is impossible.

What was it that reduced both Manby and John Ferguson to such a state of mortal terror?

The knowledge we have about the long, twisted history surrounding the Mystic Mine is bad enough. It seems likely that the details hidden from us were far, far worse.

[A footnote: The strange goings-on of the Mystic crowd did not end with Manby’s death—or, if you prefer, “death.” In 1930, not content with looting Manby’s mansion, Teresita Ferguson, her common-law husband Carmel Durand, and her nephew George Ferguson, were tried and convicted for committing  a series of burglaries (and at least one arson) in Taos. The trio got four to six years in prison.  After her release, Teresita was, for whatever reason, given a full pardon by the Governor.  In 1955, she was charged with witchcraft and fraud.  She had obtained $100 from a Santa Fe couple on the claim they were "bewitched" and she could cure them.  She also told them that--for additional funds--she would lead them to $25 million worth of buried treasure hidden on their property.  Her run of peculiarly good luck continued when she was acquitted.  Perhaps the fact that her son, Columbus, was a former Taos sheriff (!) had its influence.  Teresita Ferguson died at the age of 91 in 1979.  And, oh, the stories that must have died with her.]

Email ThisBlogThis!Share to TwitterShare to FacebookShare to Pinterest
Labels: Arthur Rockfort Manby, disappearances, murder, mysterious deaths, suicide, you name it this story has it