The Rise and Fall of Adah Isaacs Menken


“I stand a wreck on Error’s shore,
A spectre not within the door,
A houseless shadow evermore,
An exile lingering here.”
-Adah Menken


The brief, but dazzling career of Adah Isaacs Menken enshrined her as the Marilyn Monroe of the mid-19th century. At her peak, she was the highest paid actress in the world, with her combination of delicate beauty and overt sexuality making her the most photographed and desired woman of her time.

And she died alone and broke when she was barely past the age of thirty.

Menken was even more adept than Poe when it came to creating autobiographical fictions, which has made piecing together the truth of where and when she was born—or even what her real name might have been--a favorite game among those with a taste for historical detective work. The most popular educated guesses claim that she was born in New Orleans in 1835 as Adelaide McCord. Or maybe it was Dolores Adios Fuertes?  Or was she Ada C. McCord, born in 1830 in West Memphis, Tennessee? Or perhaps she was Ada Bertha Theodore, the daughter of a Creole woman? Or was she a native Texan?  A Chicagoan?  Was she Irish, Jewish, Creole, African-American, French, Scottish, English or Spanish?

Whoever she originally was, Menken grew into a bright, well-read girl with a particular talent as a linguist. She began her career as a dancer in New Orleans’ French Opera House. She subsequently danced in Cuba, where she was known as the “Queen of the Plaza.”

In 1857, she was living in New Orleans, the wife of a musician named Alexander Isaacs Menken. (There are some suggestions she had previously married a Philadelphia musician named Kneass, but that is uncertain.) In that same year she made her earliest known appearance as an actress. By 1859, she was in New York, performing in various light vehicles. (Her rare attempts at heavy drama were usually seen as unsuited to her talents.) She met a well-known American boxer named John Carmel Heenan, and, under the assumption that Alexander Menken had divorced her, married the handsome pugilist.

As it turned out, she was still legally married to her first husband, but as her relationship with Heenan only lasted a couple of months, her bigamy proved to be virtually irrelevant. Soon after their “marriage,” Heenan left for England to train for a world championship fight. In his absence, Menken (who capitalized on her lover’s fame by billing herself as “Mrs. John Carmel Heenan”) played to packed, swooning audiences in New York and Boston. She quickly became known as “the Adorable Menken.”

Heenan did not find being upstaged all that adorable. From England, he ended their affair and refused to send any more money for her support. This very public breakup was like an early Christmas gift to the newspaper editors of 1860, and, of course, the publicity was equally beneficial to the two participants. Menken, with her instinctive talent for self-promotion, even rented a hall to give readings from Poe and Shakespeare, followed by an impassioned speech defending herself.

She was the social and media sensation of the day. When she wasn’t performing in front of adoring audiences in the East Coast and Midwest, (although her critical notices were mixed,) she played the queen of the New York bohemian crowd. She became a center of the contemporary literary scene, drinking and socializing with newly-minted friends such as Walt Whitman. She had now graduated to being “the Royal Menken.” 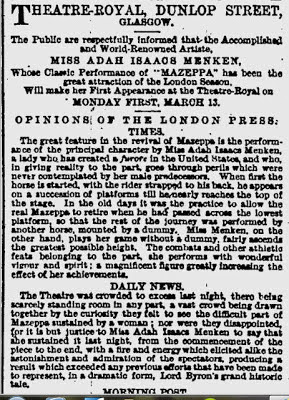 In 1861, she debuted in what would prove to be her signature role in “Mazeppa.” It was a quite ridiculous but hugely crowd-pleasing melodrama involving Tartar princes, Polish noblemen, gorgeous costumes and scenery, and lots of live horses. Menken, playing the male title role, brought down the house in one scene where, wearing flesh-colored tights that gave the illusion of nudity, she made a dashing—and genuinely dangerous—ride across the stage on a wild stallion.

In 1862, she brought “Mazeppa” to San Francisco, where it was said more than half the population of the city came out to see her. That same year, she “divorced” Heenan and married an American journalist named Robert Henry Newell. 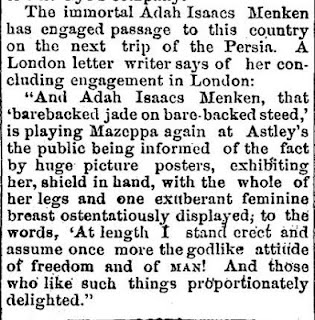 Having conquered both of America’s coasts, Menken set her sights on London. She performed there in a lavish pre-Vegas-style production featuring dozens of horses, a ballet, and two hundred soldiers. She attracted such huge, fervent crowds that it was often necessary to enlist the police to escort her home. As had been in the case in New York, she gravitated to the literati.  She became friends with Swinburne, Dickens, Thackeray, Rossetti, and Alexander Dumas (who was rumored to have become her lover.) While in London, she decided another change in husbands was about due, when she realized she was pregnant—with a child fathered not by Newell, but a gambler named James Paul Barkley. She quickly obtained a divorce, married Barkley, and parted from him even more swiftly. This fourth marriage lasted an epic Kardashian-level three days. She gave birth to a son, Louis, with George Sand standing as godmother. Unfortunately, the baby did not long survive. (She earlier had a child with Heenan, who also died soon after birth.)

After her son’s death, Menken made Europe her home for what little remained of her life. She proved as popular in Paris as she had been everywhere else she appeared. By 1867, she had become a merchandising phenomenon. Her name was used to sell cravats, jewelry, hats, clothing, and handkerchiefs. You could even buy a Menken shaving mug. Her photographs were seen virtually everywhere.

What added depth to her popularity was the fact that she was rather more than a pretty face. She may have not been a great dramatic talent, but her acting was winning, sprightly, and intelligent. Most interestingly, she preferred the page to the stage. Her true love was writing, which she once called “my only salvation.” She composed many poems throughout her life—often good ones—as well as essays, usually with religious themes. (She was possibly raised a Catholic, but after her first marriage she studied Judaism, a faith she continued to sincerely follow in her own unconventional fashion.) She published a review of her friend Whitman’s then-scandalous “Leaves of Grass,” asserting he was “centuries ahead of his contemporaries.” Menken even wrote opinion pieces covering the political scene. She was also an early advocate for women’s rights. Rather ironically, considering her busy marital history, she believed that women should not think of marriage. She wanted them to be encouraged to seek “higher and holier motives than that of being fashionable and securing wealthy husbands.”

Considering Menken’s charisma, intelligence, energy, and genuine, if somewhat directionless, desire for “higher and holier” things, it would have been interesting to see what she would have done with her life if she had reached full maturity. This was not to be. While performing in “Mazeppa,” in London on May 30, 1868, she collapsed with pains in her side. She never performed again. Although she had made a great deal of money, she spent or gave away her income as quickly as it came in, so once she was unable to work, she was left practically poverty-stricken. The ailing Menken moved back to Paris, where she hoped to make a new career through her writing. She spent her last days compiling an edition of her poems. (The resulting volume, “Infelicia,” was published posthumously, and gained a fair measure of success, remaining in print until 1902.)

Perhaps the most striking thing about Menken’s career was its incredibly ephemeral nature. No sooner had she left the stage, than this woman who had so recently been the idol of two continents was utterly ignored, an instant has-been at the age of about thirty-three. Her many husbands, her even more numerous lovers, the bohemian and literary sets who had once courted and applauded “the Menken” were nowhere to be found when she actually needed them. For all her bravado, Menken gives the impression of an inwardly sad, vulnerable person, who, as most such types do, attracted people eager to take advantage. When she was no longer wealthy and celebrated, these “friends” had no more use for her.

Menken faced her abruptly changed fortunes with a philosophical spirit worthy of a true poet. On her deathbed, she talked of this world and the next with a rabbi she had befriended, and then wrote, “I am lost to art and life. Yet, when all is said and done, have I not at my age tasted more of life than most women who live to be a hundred? It is fair, then, that I should go where old people go."

Very soon after making that statement, she did go, on August 10, 1868. Fittingly for someone whose early life is shrouded in a fog, it is not known what killed her. Theories include an abscess, tuberculosis, peritonitis, cancer, or “a complication of disorders.” Perhaps she simply burned herself out. Three days later she was buried in a simple funeral with only a handful of mourners—“fewer people,” an early biographer groused, “than if she had been an unknown grisette.”  As Menken had requested, her tombstone was inscribed only with her favorite saying, "Thou knowest."

The newspapers largely ignored the death of the woman who had so lavishly provided them with copy, causing one journalist to publicly sneer:

“Ungrateful animals, mankind;
Walking his rider's hearse behind,
Mourner-in-chief her horse appears,
But where are all her cavaliers?”