This Hat's So Fly: Guest Post by Ella Bessmer

[For this week's post, I'm loaning the keys to Strange Company HQ over to Ella Bessmer, author of the new(ish) history blog, Now, Where Shall We Begin.  History is full of odd fashion fads, but only a select few resulted in a body count.  Ella's here to inform us about the popularity of one of these fashion disasters, and the efforts to eradicate it.] 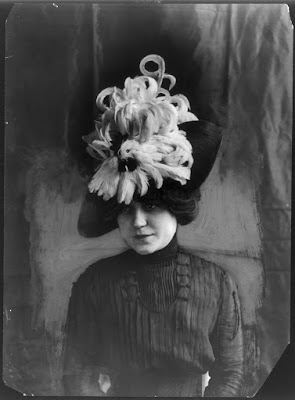 Your Hat's So Fly...Not: The Sordid History Of The Plume Trade


Feathers. Soft, lux, elegance made tangible. Feathers have been significant amongst many global cultures and societies for thousands of years.

The Gilded Age was a period in US history lasting from the late 1800s to about 1900. It was a time of economic prosperity and massive industrial growth.

With increased economic prosperity and rapid industrial development, many people found they had more disposable income than ever before. Meanwhile, cities were becoming more urbanized. With this rise in population and the increased reliance on machinery and factories, city dwellers found themselves wanting more exposure to the natural world. People began to keep terrariums and aquariums. Taxidermied specimens became common in many households.

Eventually, clothing was influenced by this trend. Fashion began to reflect this interest in nature and the desire to own pieces of natural beauty and extravagance.

It was during this time that the plume was taken to a new, unprecedentedly morbid level.
Hats, a sartorial staple, started to be decorated with birds. Everything from entire owls, peacocks, and egrets, to parakeets, were being proudly displayed on the heads of fashionable Victorian women. No one gave a second thought to snapping up a hat adorned with a jewel-toned bird of paradise or an animated diving gull. Birds were seen as an inexhaustible resource, a product to be freely used. 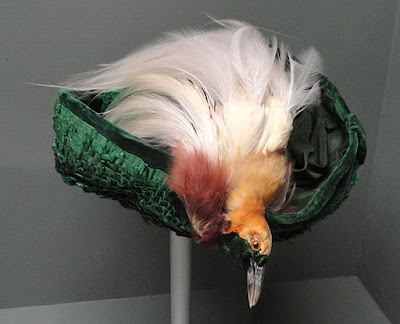 The bird of paradise had what was termed “fancy feathers”. This meant that they had feathers that were hard to come by in the plume trade. As a result, they commanded higher prices.

One well-known anecdote that describes the variety of birds used for these hats came from an ornithologist named Frank Chapman. During two instances when he was walking down a street in Manhattan, Chapman was able to spot specimens from over forty species of birds on the hats of passersby.

But this craze for birds was not without detriment. Abroad and in the US, bird populations were being decimated. Snowy egret plumes, or aigrettes, brought the highest prices at market. At their highest rate, the feathers fetched a price of $510 per ounce. The birds were sought out for the extravagant plumage they had when they were nesting and mating. As a result of this, massive numbers of egrets were killed in their nests. This meant their now orphaned chicks were left to starve. At the height of the plume trade, many species of egrets were very nearly wiped out.

Ornithologists were scared. They observed that over 50 varieties of birds were on the verge of extinction. Campaigns were started to curb this practice. One such campaign headed by the Royal Society For The Protection Of Birds was highly sexist in nature. They preached that the sole fault of the bird-killing trend fell upon women as they were the main consumers of the hats. The people in charge of the campaign chose to neglect the fact that men also played a role in the plume trade. Ironically enough, men were the ones responsible for the relentless hunt and acquisition of the birds as well as for the selling and production of the hats.

As this ineffective campaign went on, countless birds continued to be slaughtered.

Harriet Hemenway was from a wealthy Boston family. She was well-educated and came from a family of political activists. Harriet was married to Augustus Brewster, a wealthy heir to a shipping company. He had a dedication to the natural world and devoted much of his time to preserving it. Augustus was one of the original members of the Metropolitan Park Commission, an organization that is still going strong today.

After reading an article about the horrors of the cruelty of the plume trade, Harriet was shocked and disgusted. With the support of Minna and her cousin, she set out to take down the barbaric plume trade. Their first mode of action; rallying people to join the cause.

Together, Harriet and Minna identified the names of the wealthiest women in society. They then invited them to a series of tea parties. At these parties, they urged the women to boycott the hats and join them in protesting the cruel feather trade. Some women refused to join the cause and left. The ones that stayed swore off wearing feathers and joined the movement.

Eventually, the women worked out an effective strategy. They planned to have their protest target primarily upper-class women, the main consumers of the hats, rather than the people responsible for the creation of the hats.

These parties proved to be a rousing success. During the time in which the society had been meeting, the movement amassed the support of over 900 women. These women, in turn, recruited men to the movement, furthering visibility for their cause in the political sphere.

Despite this, more visibility was needed. It was the late 1800’s and the women's right to vote had not passed. Harriet knew she would have to enlist the help of men to get any political friction with the movement. She recruited scientists and prominent male figures to join the cause.

Through the collective efforts of the community they had formed, in 1896 Minna and Harriet came to found the Massachusetts Audobon Society. The society was named after the famed painter, James Audobon, who was known for his lifelike portraits of birds. The Audobon society was (and continues to be) a nonprofit organization whose mission is to preserve the biodiversity and habitats of birds and other wildlife. The creation of the original Massachusetts chapter led to the development of other Audobon societies in 12 states. The Audobon society later would come to be instrumental in the passage of the Lacey Act in 1900, which banned the trafficking of illegal wildlife in the United States.

The Lacey Act was a huge achievement for the conservation movement. It created severe penalties for people who illegally transported wildlife. Despite this, the plume industry was still killing birds in record numbers. The Lacey Act had been beneficial but had failed to shut down the interstate feather trade. Milliners had switched from using egrets to using shorebirds and wading birds. As a result, these populations were now threatened.

When others voiced their opposition to using birds on hats, milliners said that stopping the feather trade would result in many people losing their jobs. They dismissed the supporters of the anti-plume movement saying they were too weak and sentimental.

When questioned about the source of their feathers, suppliers would claim that their hats were only adorned with found feathers (only a small percentage of them were). This gave some consumers peace of mind, but by this point, more politicians and conservationists were starting to take action to stop the industry.

In 1913, the Weaks-McLean Law, otherwise known as the Migratory Bird Law, was passed. It was a direct result of the work of the Audobon society. This act was later replaced by the Migratory Bird Treaty Act of 1918 due to a constitutional weakness ( it was passed as a rider to an appropriation bill for the Department of Agriculture). This act prohibited the hunting and illegal transport of wildlife, essentially protecting birds from people. It took the federal legislation of the MBTA to put an end to the plume movement. As a direct result of this law, bird populations that had been killed for the millinery industry have since rebounded to their previous levels.

As times and fashions changed and new laws were instated, feathers were no longer sought after. Hats were now being decorated with ribbons and fabric. As a result of this, hunters who had previously relied on the plume trade were forced to find other ways to make a living.

The movement, originally organized against the use of birds and their feathers, set the precedent for other protective conservation legislation.

I am eternally grateful for the incredible, unceasing efforts of these early pioneers. Because of them, we are still able to enjoy the elegance of the majestic snowy egret and american egret, as well as the marvels of other incredible bird species.

What are your thoughts on this subject?

What parallels can we draw between the modern-day fur and ivory trade and the plume trade?

What other impacts did the plume trade on the conservation movement?

This article details the parallels between the plume trade and the modern-day fur trade.

This post describes how the plume trade and the era of extermination lead to many modern conservation successes.

A fascinating article that goes into how the plume trade became an international industry stretching as far as Australia.
Posted by Undine at 4:22 AM