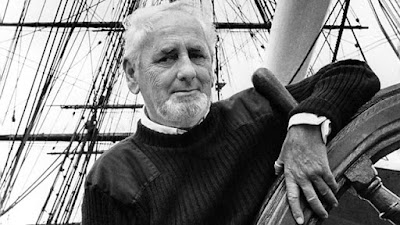 Nicholas Monsarrat had a long and distinguished career as an author. He is probably best remembered today for the 1951 novel, "The Cruel Sea," and 1952's "The Story of Esther Costello." When he was visiting a Quebec shooting-lodge in 1953, he was told a story which was as compelling--and far stranger--than anything in his fiction. Some time later, he wrote an account of his eerie experience, which was published in Peter Haining's "The Mammoth Book of True Hauntings." Although his tale is impossible to verify, it is unique enough to warrant our notice.

Monsarrat heard his story from another guest at the lodge, someone he identified only as "George." The man was a stranger to him, and an actor to boot, so Monsarrat acknowledged that the tale "may well have been a pack of lies." However, at the time, at least, he believed it.

Earlier, Monsarrat had commented to "George" about the man's son, a boy eight or nine years old. The youngster had amazing eyes--enormous in size, the brightest of blue, and with an expression of "staring at the universe as if he did not believe any of it." To look into those eyes was like "gazing through a window into unfathomable depths." George merely replied calmly, "He's always looked like that."

George was a Hungarian by birth, although after living in Canada all his adult life and marrying a Canadian girl, he considered himself a fully integrated citizen of that country. He often got roles playing native Canadians. Just before his son was born, George's mother came from Hungary to help raise the baby, and generally get to know her first grandchild.

The elderly woman was very much "old school." She was of uneducated peasant stock, who spoke no English and had absolutely no interest in "Canadianizing" herself. In fact, she was horrified by the way her son had "gone modern" and abandoned his Hungarian heritage. She became increasingly worried that her grandson would do the same. She did not want him to grow up ignorant of his Hungarian roots. "Let me have four years," she begged her son and daughter-in-law. "Just a little time--enough for the language and some of the old customs. Then he will be yours again."

George's wife, it was inferred, was not altogether enamored of the idea. George himself, however, agreed--partly for the sake of avoiding discord, and partly because he didn't think it was a half-bad plan. He felt his mother had done a fine job of raising him. Why not give his son the same benefit?

It will remain forever unknown just how this unconventional scheme would have worked out. Shortly after the baby was born, George's mother suddenly died. The old Hungarian woman was clearly strong-willed and fond of doing things her way, but Death is more powerful than any mere human.

George's son was handsome, healthy, well-behaved. A perfect child in every respect but one: he never spoke, or, indeed, made any sounds at all. He just stared at the world with those enormous blue orbs...in utter silence. All the doctors and specialists who examined him were baffled. They found nothing at all to explain this unsettling muteness. All they could suggest was that the boy was "a late developer."

This state of affairs continued until the child was three years old. Then, one night, George and his wife came home late from a party. They were startled to hear an unfamiliar voice emanating from upstairs. They went immediately to their son's bedroom. He was standing up in his cot, staring at a corner of the room, speaking rapidly and fluently in Hungarian--a language to which the child had never been exposed.

The next morning, the boy relapsed into his usual silence. This lasted until he was four years old, when he suddenly began to speak perfect English.

With a strong Hungarian accent.

George's mother had had her way.
Posted by Undine at 4:25 AM