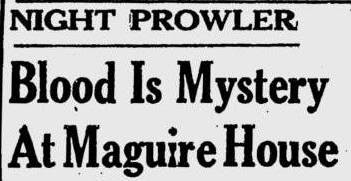 If it's Wednesday, that must mean it's time for Weird Blood Sightings!

Yup, I've got another one.  This particular sanguinary riddle is brought to us courtesy of the Virgin Islands in 1962.  A woman named Mary Maguire reported to police that one morning, she woke up to find a trail of blood in her kitchen that led to the bedroom of her young son, who was sleeping in peaceful ignorance that anything peculiar had happened.  She found blood on her refrigerator, kitchen floor, a kitchen cabinet, on her son's bed, and on his chest of drawers.  Mrs. Maguire thought she heard a gate opening around 1 a.m., but aside from that neither she nor her son had seen or heard anything during the night.  Nothing was missing from the Maguire house, and a check of local hospitals indicated that no one had been treated for any injuries that could account for all this blood-letting.

And that, as is usual with our Mystery Blood incidents, seems to have been that.

Incidentally, if you think these stories are creepy, just wait until I get around to posting some of the numerous Mystery Explosion clippings I've accumulated.
Posted by Undine at 5:00 AM