If one is fortunate enough to have a slim, beautiful body, it is no great feat to make money displaying it to the world in some manner or another. To gain a fortune as well as lasting fame out of having the reverse is a notable achievement.

Probably the ultimate example of the latter was Daniel Lambert. Born in Leicester, England on March 13, 1770, his early years were a placid, anonymous middle-class existence. At the age of about eighteen, he took over his father’s position as the keeper of the city jail. The young Lambert was a kindly man, who—somewhat unusually for jail keepers of his day—did his utmost to treat his prisoners with humanity. In return, he was as well-liked by the inmates as he was by his peers. However, his true interest was sport. The 5' 11" Lambert had always been immensely strong—he once fought off a dancing bear that was attacking his dog—and he was much admired for his knowledge of sporting animals such as dogs and horses.

Lambert led an athletic life, and claimed not to eat or drink to excess. Nevertheless, in his twenties, he began to put on an immense amount of weight. By the time his jail closed in 1805, he weighed over seven hundred pounds, making him the heaviest known person up to his day. He measured some nine and a half feet around.  His size made it virtually impossible to hold a normal job, he was painfully sensitive about his appearance and the curiosity it aroused, and for a time he became a sad recluse.  However, perfect strangers, hearing of his unusual physique, would frequently rudely invade his privacy on various flimsy pretexts simply in order to see him for themselves.  His pension from the prison was proving inadequate for his needs, so although he loathed being regarded as an oddity, he made the practical decision that if people were determined to stare they may as well pay for the privilege.

In the spring of 1806 he moved to London, (a special extra-large carriage had to be built for him,) charging admission for the curious to visit this "greatest Curiosity in the World."  People at first came merely to gawk, but were soon charmed by his intelligent, naturally humorous personality.  He was well-read, gentlemanly, and even sang in a fine tenor voice.  The "Times" wrote:  "The concourse of fashionable visitors to the house of Mr. Lambert...has been very great, during the last two days.  To find a man of his uncommon dimensions...possessing great information, manners the most affable and pleasing, and a perfect ease and facility in conversation, exceeded our expectations...The female spectators were greater in proportion than those of the other sex, and not a few of them have been heard to declare, how much they admired his manly and intelligent countenance."   This "prodigy of human dimensions" held salons of a sort in his apartments, where visiting him soon became quite a fad among London’s elite. He was even presented to King George III.

Lambert maintained his dignity in the face of what could easily have become humiliating circumstances.  He refused to let his "salons" become a zoo. When one visitor refused to remove his hat, Lambert ordered him to leave, "as I do not consider it a mark of respect due to myself, but to the ladies and gentlemen who honor me with their company." When one woman persisted with insensitive questions about the cost of his extra-large size wardrobe, he silenced her by remarking,  "I cannot pretend to charge my memory with the price, but I can put you into a method of obtaining the information you want. If you think proper to make me a present of a new coat, you will then know exactly what it costs."

After a few months of this, Lambert understandably tired of being a sideshow, however fashionable. He went back home to Leicester a rich man, and devoted himself to watching his favorite sporting events. He made a very profitable business breeding dogs, and embarked on short, but highly successful exhibition tours. Although he never married or, as far as is known, had any sort of romantic relationship, he had a wide circle of friends, and continued to be a subject of interest for the press.

It is a bit of a puzzle how Lambert became so gigantic. Despite his size, his health was good, and he showed no recorded signs of glandular or genetic disorders. It is today stated that, his own statements to the contrary, he must have eaten far too much and exercised far too little, but as proof of this is lacking, that must remain only an assumption.

Lambert died very suddenly while "on tour" in Stamford, on June 21, 1809. Up until a few moments before his death, he appeared in good health and spirits. There was no autopsy, so it is unknown why he died. The best modern theory is that he had a pulmonary embolism. It took twenty men half an hour to move his enormous casket into the grave.

As short as his fame may have been, he remained a major cultural figure for decades after his death. As Charles Dickens once wrote, "Lambert's name is known better than his history."  After his death, his personal possessions were preserved as souvenirs, eventually finding their way into museums.  (Many are still on exhibition.)  For years, a "Lambert" was a term used to describe anyone or anything of notably large size.  His fame spread to the United States when P.T. Barnum purchased a waxwork of Lambert and displayed it in his American Museum in New York.  In 1838, a collection of poems purportedly written by Lambert was published.  The verses are almost certainly a hoax, but they are a testament to his posthumous popularity.

Images of him were used in political cartoons, as a symbol of Britain's formidable might against foreign enemies.  (One popular drawing depicted Lambert on horseback attacking Napoleon, who dropped his sword and cried in terror, "Parbleu!  If dis be de specimen of de English Light Horse vat vil de Heavy Horse be?  Oh, by Gar, I vill put off de Invasion for an oder time!")

Even today, he is still regarded as one of Leicester’s “most cherished icons.” On the 200th anniversary of his death, the city held a “Daniel Lambert Day,” that attracted close to a thousand people eager to honor the memory of one of the best-beloved heavyweights in history. 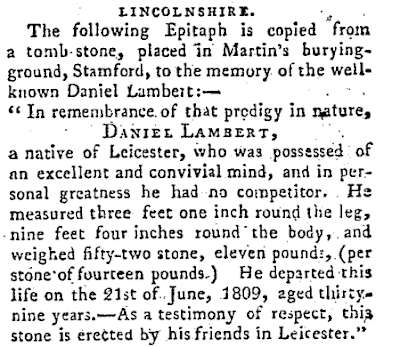 [Note:  Many thanks to the Curator of The Pet Museum for suggesting Lambert as a topic for this blog.]
Posted by Undine at 5:09 AM