The Strange Company staff is ready for the Fourth of July! 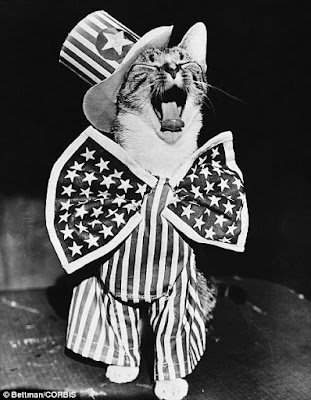 What the hell just crashed into the Moon?

Ancient trees tell of the biggest solar storm in history.

Being a professional executioner does strange things to people.

The poet and the Will O Wisp.

The fairy world of ancient China.

This may be the world's first musical instrument.

Books that are allegedly cursed.

What may be among the oldest artwork in the world.

Why Elizabeth I preferred to secretly murder, rather than execute, Mary Queen of Scots.

Dinner with the East India Company.

Here's your big chance to buy a haunted bar.

Centuries after he died, Sir Hans Sloane is causing a lot of people a lot of trouble.

The various meanings of the word "slug."

The children of the 4th Duke of Marlborough.

The globe-trotting life of Jeanne Baret.

The "Night of the UFOs."

An interview with a photographer of the dead.

Five examples of bodies being found with notes pinned to them.

A Nigerian bronze head is in the middle of one hell of a custody dispute.

If you get an unsolicited box of chocolates in the mail from someone you don't know, it's probably a good idea not to eat them.

The secret society that's preserving the history of the American West.

A brief history of the enema.  (Warning: with illustrations.)

That's it for this week!  See you on Monday, when we'll have something a little different: a Fourth of July-themed ghost story!  In the meantime, here's the perfect hymn for 2022.