How the Strange Company HQ staffers know when it's going to be a long day. 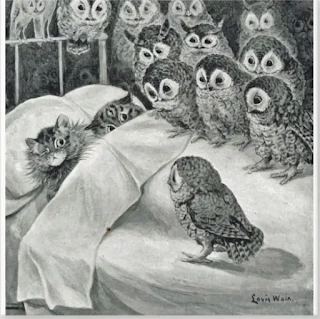 Why the hell did people think it was a good idea to eat mummies?

Actually, my favorite colors are red and yellow, but never mind.

If you think James Patterson's novels read like they come off an assembly line, that's because they do.

An artistic street in Paris.

The birth of the beach read.

The birth of Father's Day.

A whole lot of bodies have been found in wells.

The (largely ignored) grave of a black female sculptor.

The trouble with using Zeppelins in WWI.

The Irish who fought at Waterloo.

It sometimes pays to be nice to robbers.

The role of privateers in the American Revolution.

How a summer vacation inadvertently shut down the government of Charles I.

The birthplace of the Black Death.

The discovery of significant Anglo-Saxon burials.

The evolving reputation of Oscar Wilde.

Etiquette for a widow's wedding.

This week in Russian Weird looks at Early Modern witches.

A black cat brings good luck to the Brooklyn Dodgers.

The argument that Polonius wasn't all that bad.

Stonehenge and the summer solstice.

Iceland's cats are being put under a curfew.

A miniature book that may--or may not--have belonged to Anne Boleyn.

Chinese astronomers think they may have detected signals from an alien civilization.

A brief history of the modern smile.

A brief history of child maintenance.

The strange case of the Oera Linda book.

The man who spent 68 years hiccuping.

A whole lot of Iron Age frog bones have been found, and people have questions.

Exploring the dreams of animals.

A woman who really got on an elephant's bad side.

The letters of two Englishwomen in early 19th century Madras.

The life of Fred the Mastodon.

The pardoning of a convicted poisoner.

A history of the word "singular."

A look at the Copper King Mansion.

That time when Scottish chickens were forced to wear wooden clogs.

That time when Roberta Cowell was the most talked about woman in England.

The legend of Petrarch's cat.

The journal of Louise de Savoie.

A murder in a church.

That's all for this week!  See you on Monday, when we'll look at an actor unfortunate enough to star in a real-life murder mystery.  In the meantime, here's some bluegrass: