The staff at Strange Company HQ all want to be your Valentine! 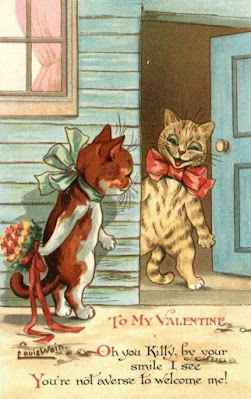 Watch out for the Abominable Snowman!

The significance of the 1932 Winter Olympics.

A renovation project is getting some help from a ghost.

Don't go looking for spirits.  You might encounter the really bad ones.

Yet another look at the (staged, IMO) disappearance of Agatha Christie.

The adventures of a spirit photographer.

The days of hotel house detectives.

The history of White House cats.

The folklore of "fairy glens."

A case of obsession leading to murder.

The history behind a medicinal chest.

Humans were probably in Europe earlier than we thought.

A hijacking ends peacefully.  Largely thanks to beer.

The sort of thing that happens when you mix ritual slaughters and drunken priests.

Romance in a hearse.

How to tell if you're an Old Maid.

Figure skaters get some strange things thrown at them.

A newly-discovered daughter of Marco Polo.

How Mary, Queen of Scots was almost secretly assassinated.  Which probably would have been preferable to three hacks on the neck from an incompetent executioner.

A sex scandal in medieval England.

The Ladies of Llangollen.

The heart really can break.

The saga of a cursed ferry.

A famed act of "insane heroism."

Howard Hughes and the Russian submarine.

That time Harlem had a high-society bathhouse for dogs.

A look at early anesthesia.

The unsolved murder of a priest.

The unsolved murder of a little girl.

The culture which may have been destroyed by a cosmic airburst.

JMW Turner and the pubs.

More on cracking the code of Charles Dickens.

The Georgian era had a lot of whiners.

"Normal schools," and how they got that name.

Life in an ancient Roman town.

That's all for this week!  See you on Monday, when we'll look at a case of Fortean house-hunting!  In the meantime, here's some 1930s dance music.