This week's Link Dump is hosted by Edwardian actress Nina Sevening and her even more beautiful friend. 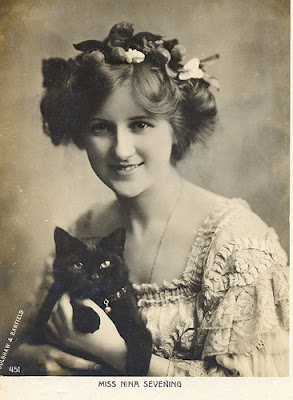 What the hell is this Utah monolith?

Who the hell murdered Dr. Cronin?

The Dark Ages were brighter than we thought.

The long and difficult journey of the Mayflower.

"Gilligan's Island" is playing a major role in a California lawsuit.

Chemistry's role in the birth of public hygiene.

Alaska has an entire town living under the same roof.

When astrology went to war.

The complicated life of an 18th century courtesan.

A family fight turns to murder in 13th century England.

So, who's up for paying nearly 3K for a bar of soap?

More on the Black Loyalists.

A skeptical look at Rosslyn Chapel.

One of those times when the words "unintended consequences" come to mind.

How a major-league book thief was caught.

...And, personally, I think she looks fantastic.

The singer who was supposed to be bigger than Bowie.  (Spoiler: he wasn't.)

The man who wrestled a leopard.

Stalin and the psychic wizard.

The man who kept the mummified head of a king in his attic.

Pretty much the only job I'm suited for.

The day after Thanksgiving seems like a good time to talk ghostly turkeys.

An archaeologist thinks he's found the childhood home of Jesus.

How to plan for the execution of a queen.

The last days of Elizabeth I.

How not to get rid of ants.

Giving thanks 200 years ago.

A London man's...unusual memorial.  And so 18th century.

The little old lady who was one of the worst people in American history.

And that's all for this week!  See you on Monday, when we'll look at a womanizer's comeuppance.  In the meantime, here's a Bob Seger song from back in the day.  I hadn't heard this song for years until a day or two ago.