The Case of the Litigated Poltergeist 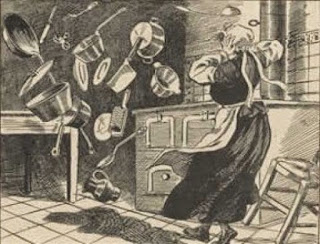 In previous centuries, it was common for episodes of what we today call “poltergeist visitations” to be explained by demonic attacks or cases of witchcraft. It was equally inevitable that often, some luckless person would be singled out as the culprit, thus leading to a witchcraft trial.

One of these cases, however, was very unusual indeed. In 1851 France, an accused witch did indeed go into a courtroom, but not as the defendant. As the plaintiff.

Our story starts in the winter of 1850-51, when the parsonage of Cideville, a village about eighty miles from Paris, began experiencing some very strange disturbances. They centered around two boys, aged twelve and fourteen, who were living at the parsonage in order to be educated for the priesthood. The residence found themselves harassed by inexplicable rappings, which, most oddly, would become louder or quieter upon request. The blows would also beat time to any tune that was suggested, like a spectral DJ. Household items would move seemingly under their own power. Doors would become mysteriously impossible to open. Tables would slide across rooms, people lying in bed would find the bedcovers rudely snatched off, and an eerie cold breeze would suddenly blow through the hallways. A vaguely human-shaped specter was seen following the younger boy around the parsonage. The young acolytes were periodically brutally slapped in the face by a "black hand."  When the two boys were removed from the household in February 1851, the supernatural disruptions abruptly ceased.

So far, the events at Cideville followed the pattern of any bog-standard poltergeist case. But then, things began to take an unconventional turn. A shepherd named Felix Thorel  was known to have boasted about possessing demonic powers. This led to the Cideville curate, Jean Tinel, coming to the conclusion that Thorel was behind this paranormal peskiness. According to the boys who were being educated by Tinel, it was when Thorel began “haunting” them that the spectral disruptions broke out.

When Father Tinel confronted Thorel, the shepherd, far from denying his knowledge of the black arts, positively reveled in boasting about them. Just to prove what he was capable of doing when he set his mind to it, he visited one of the boys and put another hex on him. Immediately after this, the paranormal manifestations broke out afresh.

Thorel was soon to regret being such a showoff. His little stunt got him fired from his job, and Father Tinel--quite weary of this spectral harassment--beat him with a walking stick. Thorel responded to these indignities by going to court and charging the curate with defamation. He asked for damages of twelve hundred francs.

During the trial, over thirty witnesses--including the mayor, several priests, and a professional Parisian occultist--testified that the Cideville disturbances were the result of a genuine haunting, and that it was impossible for the boys to cause the manifestations themselves. Baffled, the judges could only rule that “whatever might be the cause of the extraordinary facts which occurred at the parsonage of Cideville, it is clear, from the sum total of the testimony adduced, that the cause of these facts remains unknown.”

The case was dismissed, on the not unreasonable grounds that as Thorel had actively promoted the idea that he was a sorcerer, he could hardly complain if people took him at his word. He was ordered to pay all the expenses of the lawsuit. The two boys were permanently removed from the parsonage, and life in Cideville returned to normal.

Although one wonders what passed for “normal” in a village like that.
Posted by Undine at 4:37 AM