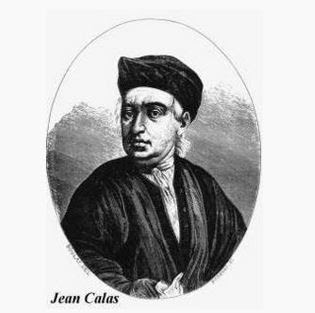 In 1761, a young Frenchman died violently. This tragedy would lead to what is still one of that country's most famous cases of judicial injustice.

Assuming, of course, that it truly was an injustice at all.

The grim chain of events began on October 13, when the body of 28-year-old Marc Antoine Calas was found dead in his family home in Toulouse. The Calas family initially stated that he had undoubtedly died of "an apoplexy." However, the doctor who examined the corpse found rope marks around his neck and bruising behind the ears, leading him to conclude Marc Antoine had died of strangulation.

When confronted with this evidence, the family changed their story. His father, Jean, told authorities that they had found Marc Antoine hanging from a rope balanced between two open doors in a storehouse on the family property, quite dead. Anxious to avoid the scandal of a family suicide, they cut the body down, hoping the untimely death could be attributed to natural causes.

The young man had wished to become a Roman Catholic--a move that went against the grain of his strongly Protestant family. Marc Antoine was known to be a moody, depressed sort--a state of mind that was strongly exacerbated by his recent spiritual conflicts, not to mention a pile of gambling debts he had accumulated. All in all, it did not seem unlikely that he had resorted to killing himself.

Most of France believed otherwise. Onlookers interpreted this evidence as pointing to murder, not suicide. France was still a strongly Catholic country, which led them to look upon the Huguenot Calas family with deep suspicion, and regard the dead would-be convert as a martyr. In short, popular opinion had it that Marc Antoine's father murdered him over their religious conflicts, with his family's approbation. (It was conveniently ignored that another son, Louis, had turned Catholic while still remaining in his family's good graces.)

Jean Calas was arrested and subjected to a trial that was clearly, unabashedly, set against him. To the surprise of no one, he was convicted and sentenced to a particularly hideous fate, which was seen as fitting for the particularly hideous crime of filicide: He was broken on the wheel, and then strangled. To the end, he insisted that he was innocent. The punitive measures did not end there. The Calas daughters were forced into a convent, and the mother and surviving sons exiled. Marc Antoine's death destroyed the entire family. 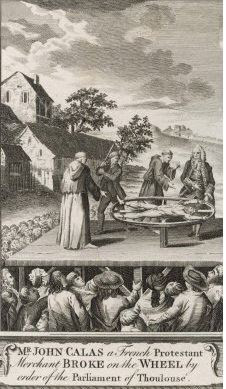 Despite the verdict, the case was still enigmatic enough to attract the attention of Voltaire. After a bit of amateur detective work, he concluded that Marc Antoine had indeed committed suicide. He learned that the young man had, on the day of his death, lost a lot of money playing cards, and that he greatly feared facing his father with the news. Voltaire also pointed out that Marc Antoine had been the biggest man in his family, towering over his 62-year-old father. He found it highly unlikely that Jean Calas, even with the help of the rest of his family, could have overpowered his son sufficiently to hang him. He believed the family had been unjustly persecuted because of their unpopular religious beliefs.

Voltaire used his reputation as one of Europe's greatest intellectuals, his contacts in high places, and his brilliant powers of oratory to launch a rehabilitation campaign--albeit one rather late in the day--for Jean Calas. He published "A Treatise on Tolerance," pleading with his countrymen to "not hate one another, let us not destroy one another in the midst of peace."

His campaign worked. In March of 1764, a royal council met to study the matter. A panel of judges was appointed to rehear the case. The upshot was that a year later, they ruled that there had been a terrible miscarriage of justice. Although they could do nothing for poor old Jean, his family was allowed to return from exile, and their property was restored. Voltaire did a bit of pardonable self-congratulation by proclaiming that France had seen "the finest fifth act the theatre can give us."

Was this a "finest" ending, or merely a bitterly ironic twist? In 1929, an author named Marc Chassaigne published "L'Affaire Calas," which contained the fruits of his own investigation of the case. He offered the theory that Marc Antoine's death was not due either to suicide or filicide. He suggested that the young man was attacked and strangled from someone who had followed him into his house--possibly someone from his gaming club. The murderer then slipped out of the house. Chassaigne noted that servants in the household had overheard a man's cries of "Murder!" not long before the body was discovered. Experiments proved to his satisfaction that it was virtually impossible for anyone to hang himself in the way described by the Calas family. Although he acknowledged the brilliance of Voltaire's defense, Chassaigne believed the great philosopher was motivated largely by his anti-Catholic sentiments rather than an objective desire for justice. (Even in the midst of his campaign to clear Jean Calas' name, Voltaire had privately admitted that the case was a puzzling mystery.) Chassaigne proposed that the Calas family was guilty of ineptly stage-managing the discovery of the body, although it is hard to explain why they would cover up their son's murder, especially when they wound up paying such a dear price for their silence. In the end, Chassaigne clearly left open the possibility that the family truly was responsible for the murder, after all.

So, how did Marc Antoine Calas die?

We'll never know for sure.