The Poltergeist in the Allotment Shed 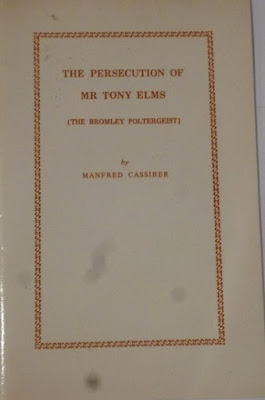 Generally speaking, poltergeists are the bratty kids of the paranormal world. They create a lot of noise, cause some damage, and make obnoxious spectacles of themselves, but they are, on the whole, seemingly helpless to do any real harm. Their antics are tiresome, rather than evil.

On occasion, however, polts exhibit threatening, even fiendish behavior. Reading these accounts, one understands why our ancestors attributed such sinister visitations as the work of the Devil. One of the more well-known cases of such malevolent hauntings took place in Bromley, England, in the early 1970s. It is also, fortunately for paranormal researchers, among the more well-documented poltergeist accounts.

Of all the places where you would expect hellish forces to erupt, an allotment shed probably rests at the bottom of the list. The Kentish Garden Guild of Bromley, England consisted of three pensioners, Alfred Taylor, Tony Elms, and Clifford Jewiss, who managed two sheds in the city's Grove Park allotments, which they used to sell gardening supplies to other allotment holders. It was a modest little enterprise, run by the retirees mainly as a way of keeping active.

It was on April 26, 1973, that these sheds began inspiring something considerably weirder than flowers or vegetables. The three men were in one of the sheds when some strange powder suddenly hit the ceiling. Before the trio had time to digest this occurrence, a small jug on a shelf abruptly flew across the room. Jewiss picked up the jug and placed it a covered box. Instantly, the jug was...somehow...back on the floor.

Flying jugs are quite bad enough. Ones that teleport themselves through solid matter are really too much.

That was just the beginning of any number of unexplainable and increasingly disruptive incidents. Fertilizer would shoot out from its bin, spraying anyone in the vicinity. A seven-pound weight sailed through the air, circling Taylor's head menacingly. Any and all items in the sheds would be seen, as Taylor put it, "going round the hut like skittles." Bottles would mysteriously become unscrewed, and their contents dumped on the floor. Large amounts of fertilizers would vanish from their storage containers. Once, when Elms was about to drink coffee, he noticed--fortunately, just in the nick of time--that its contents had been replaced with fertilizer. Half-ton bags of fertilizer would move on their own accord. At times, the sheds themselves would shake as though an earthquake had hit. Coins would fly throughout the rooms. One of their customers, George Bentley, summarized the situation quite nicely: "There were some right queer goings on."

The men were not only baffled by these events, but increasingly frightened. They sensed that whatever was causing these phenomena was not just mischievous, but hostile. Unsurprisingly, they lost customers--who wants to shop for a rake only to be hit in the head with a bag of fertilizer?--and the trio began to fear their personal safety was threatened.

Elms decided to try fighting occult with occult. One night, after consulting with a group of "white magicians," he performed an exorcism in one of the sheds. Those waiting outside heard chaos. The walls thudded loudly, and the heavy iron door repeatedly swung open. When Elms finally staggered out, he was bruised and bloody from a cut on the head.

Next morning, when the men returned to the shed, they saw what the entity thought of their spiritual efforts. As one of the men said, it looked "as if it had been hit by a bomb." Items which had been on the shelves were now circling in the air. Creepiest of all, the sign of the cross was painted or scratched everywhere inside the shed--on walls, on chairs, on bins...everywhere.

The poltergeist began pursuing the men even when they were nowhere near the sheds. Taylor was--in the presence of witnesses--tormented by the entity in his own home. On another occasion, when he was in an office building, he felt invisible hands give him a strong shove. It seemed that there was no getting away from the harassment.

In September 1973, Taylor contacted the Society for Psychical Research. Perhaps professional assistance could finally rid them of this costly--and dangerous--pest. Two Society members, Pauline Runnells and Manfred Cassirer, made several visits to the sheds, and immediately saw that this was no hoax. The poltergeist treated its guests to its whole bag of diabolical tricks. Items flew about the room or were suspended in mid-air, or simply inexplicably disappeared. Security bolts on the windows vanished before their eyes. The buildings shook from the force of violent blows on the walls. They witnessed the entity ripping Elms' shirt and sticking a saw down his back. Later, a flower bulb was forced into Elms' mouth. (For whatever reason, Elms seemed to be a particular focus of the spirit's wrath.) During one visit, money belonging to Elms vanished. Runnells asked the entity to return his cash. Two coins suddenly appeared from nowhere, hitting her on the head.

The presence of the psychic detectives seemed to inspire the entity to new heights of High Strangeness. The number "1659" suddenly appeared on a wood panel. This was followed by more automatic writing: a question mark, various random letters, the name of one of Alfred Taylor's friends.

Perhaps the eeriest features of the entire haunting came next. On a shelf, the impression of a child's face began to appear. Then, a piece of brass with "MN" stamped on it suddenly dropped on the floor. Nobody present had ever seen such an object before. And what did "MN" mean?

That was for the poltergeist to know and none of them to find out.

Two chemicals stored in the shed, white sulphite and brown Maxicrop, were used by the entity to outline a skull on the counter. It appeared almost instantly, too fast for human hands to create it. Then, the sinister face gradually vanished.

The whole unnerving business kept going for nearly two years--an unusually long time for poltergeist visitations--until it suddenly stopped as unaccountably as it had begun. It was noted that the activity ceased when work on a nearby block of garages had finished, but it's anyone's guess if there was any possible connection.

Everyone who visited the allotment sheds during those two hectic years agreed that something very strange went on, something that was not capable of being created by any human trickery. But what did create it, and why?

We'll almost certainly never know while we're on this side of the grave.
Posted by Undine at 4:34 AM