This account of a particularly pesky UFO appeared in the "Dayton Daily News," March 3, 1971:


By Dale Huffman, Daily News Staff Writer. According to Leon Turner, there's a weirdly lighted unidentified spacecraft of some sort hovering over the Dayton area. It swoops down and buzzes 1-75 traffic and frequently, in the past five months, it has followed Turner's automobile.

Turner, 30, who lives at 110 Vandergrift Rd., says he has seen the spacecraft several times. Furthermore, some, of Turner's friends have seen it, too.

Turner describes himself as sound of mind and body and says his 20-20 vision was checked just last week. He says his incredible story of the spacecraft is "Absolutely true... and I'll swear by it."

He says it all started last Sept. 1 while Turner was working as an engineer at radio station WPFB in Middletown.

"I was on the job at the station." he recalled, "when some kid called and said he saw the strange lights near the station transmitter.

"I called Noah Gross, a minister who has a show which is broadcast on WPFB. He lives near the tower. Noah and his wire and kids went out, and they called me back. Noah was quite shaken up.

"He told me, 'Buddy, there's something right above the trees, hovering. There's a red and green pulsating light, and like fire falling from the sky.'"

Turner said he went looking for the craft when he got off work. "I drove around most of the night, and then about daybreak I saw it. It was just like they described it, red and green, with pulsating lights, and it skipped across the top of the trees at a high rate of speed."

Turner said he saw the spacecraft again nine days later and observed it through high-powered binoculars for about five minutes. He said he saw it several times after that.

Bill Hart, general manager of WPFB and his wife, Jerry, women's director for the station, both claim they saw the red and green object one night. Mrs. Hart said, "It is definitely not a plane or helicopter. I know a plane when I see one."

Turner, who said the continuing experience is somewhat frightening, said he doesn't know exactly what the craft is, but theorized that it "isn't from this world." He believes it may be following him because, "I got curious about whoever it was." And even thought Turner has changed jobs (he now drives a truck) he said he hasn't been able to shake the space craft.

"Now I think the thing is following my truck at night," he said. "I think saw it on 1-75 near Vandalia when I was coming home Monday night."


"I've gone as far as I'm going to go with them," says Leon Turner. "The next move is up to whoever, or whatever, is in those UFOs. They will have to land, get out, and offer to shake hands with me."

Some of the hundreds of Dayton area residents who claim they have seen strange objects in the skies over the Miami Valley in the last 30 years have had closer encounters with the objects than others. Leon Turner is one of them.

Turner says UFOs followed him almost nightly for nearly six months. He claims he took pictures of these "spacecraft," and he has some rather unusual photographs to prove it. He also believes he made voice contact with UFO occupants via the citizens band radio in his car. 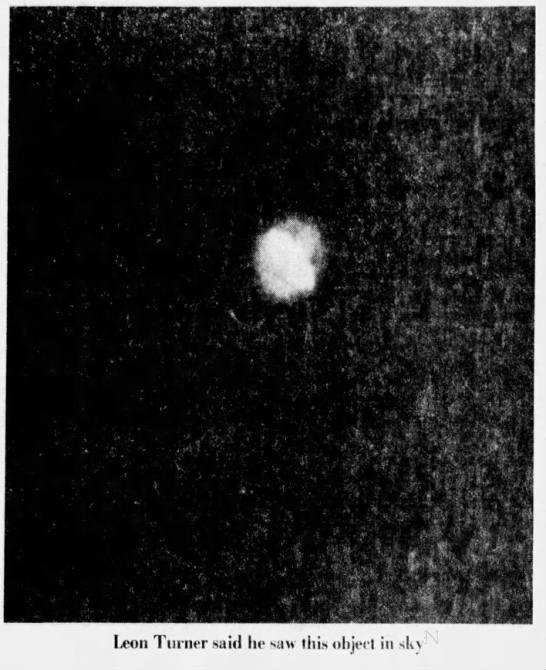 For a long time, Leon Turner worried if others believed the bizarre stories he told. He doesn't worry about it any more. "I know what I saw, what I experienced," he says. "I didn't imagine any of it or make it up. It really happened to me and that's the God's truth." 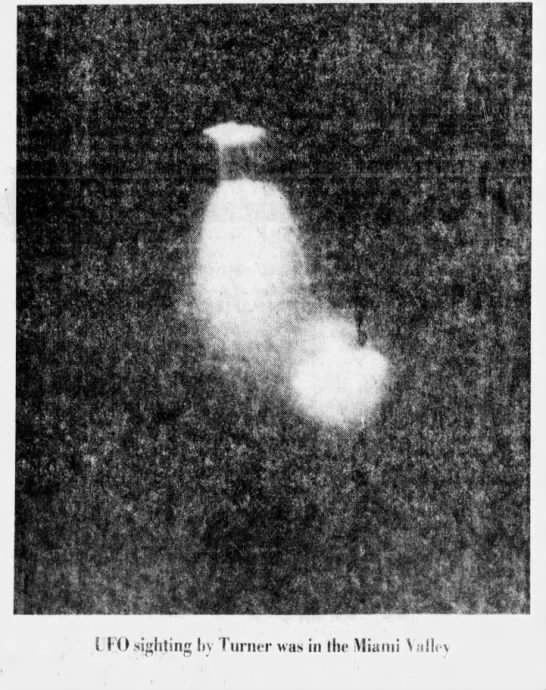 From Sept. 2, 1970 until Dec. 25, 1970, Turner kept a diary detailing his frequent encounters with what be believes were UFOs. Turner, now 37 and an employee of the Purolator Corp. in Dayton, was an engineer at radio station WPFB in Middletown when he compiled the diary.

According to his diary, Turner first sighted a UFO on Sept. 2, 1970. "It was about 1 a.m. and I was in Franklin," he wrote. "The UFOs appeared as four bright red lights 'standing' just above the tops of some trees. I watched them for a moment, then they disappeared."

The next entry in his diary is dated Sept. 9.

"I was in Franklin again," he observed. "There was a greenish-blue light in the sky, about 300 feet off the ground and traveling parallel with my car. I observed it for five minutes with my 8x40 binoculars. During these five minutes I saw the light move at speeds that would stun one's imagination."

Later the same day, he wrote: "I saw a red and green light pass over the radio station. I placed the altitude at 1,000 feet. It was noiseless. Then it stopped and remained in the exact spot for 2 1/2 hours. At 11 p.m. it disappeared."

On Sept. 10, Turner told of following a UFO from Franklin to Xenia.

"On one side, the craft had a standard red running light, on the other side, a green light. The distance between the two lights seemed to be 30 to 50 feet. At one point, when the craft was hovering about 100 feet off the ground, I observed it for about two minutes. I was close enough to the craft to have thrown a rock at it. There was no sound whatsoever. I could not tell if there was a dome or bubble on top of the craft."

Turner reported seeing four more UFOs near the radio station on the night of Sept. 11. And on Sept 20, he wrote, "I was on my way home from work when, for the first time, I realized these flying objects were actually following me home each night. I have no idea why they are following me, unless It is because I know they are here and I am watching them all of the time. There is no other reason I can think of."

On Sept. 21, Turner wrote that he and a friend, Bill Carney, who at that time was a newsman at WPFB, observed three UFOs on Upper Bellbrook Rd. and four days later, on Sept. 25, Turner wrote, "A UFO followed me home from work again this morning."

Turner noted in his diary that UFOs didn't follow him much during the month of October and then, on Nov. 7, he wrote: "When I left the side door of the (radio) station and approached my car, I noticed a UFO circling the station. I watched this craft for a minute, then got In the car and decided to take 1-75 home. Just as I pulled onto 1-75, there they were, waiting just over the first group of trees off to the left of the southbound lanes.

"I watched them zip over the tops of the trees and fly parallel with me as they have done many, many nights. The red flasher lights (on the UFOs) were going. I could observe goldish-looking lights, too, as If they were coming from a cabin or cockpit of some sort. They zipped along beside me all the way to the edge of Dayton, then I saw them go over the top of the Dayton Power and Light Co. station. I didn't see them again that night."

Turner recorded UFO sightings on Nov. 9, Nov. 15 and Nov. 17. On Nov. 18 he wrote, "I was driving on 1-75 and when I got to the Rt. 725 exit, a UFO came over the interstate and headed east just in front of my car and approximately 300 feet In the air. I grabbed my flashlight and began signaling the craft, but this was to no avail. Then the idea struck me to pick up the CB walkie-talkie, Just for the fun of it. I did not expect anyone or anything to hear me.

"Nevertheless, I began transmitting. I said, 'Hello. Can you hear me up there?' Just seconds after I released the transmitter button, a strange and uncanny piercing sound came from the receiver for a good 20 seconds. It was an eerie kind of sound. At first, it really did give me the creeps. Believe me, the sound was very loud and strong. After 20 seconds, the sound stopped and I heard a voice. But I could not understand one word that was being said.

"All the rest of the way home (a distance of about 15 miles) I tried to make contact with whoever or whatever it was that had contacted me. But that was the only transmission I heard from the UFO. One thing I can say for sure, I have never heard this sound before and, if I ever hear it again, believe me I will know it."

Turner spotted UFOs on Nov. 21, but his attempts to make CB contact with the objects failed. On Nov. 22, after observing a UFO on Woodman Dr. in Dayton and another on Smithville Rd., Turner said, "I think these UFOs are trying to lure me into following them, as I am sure they intend on picking me up sometime. But it appears they like to play games with me. I haven't the slightest idea how long they intend to follow me, watch my house, play their little game. But you can be sure of one thing they have a reason for it. And I believe the reason is they actually intend on taking me captive in their craft. However, I have no idea when this will occur."

On the morning of Nov. 23, Turner was driving on Harshman Rd. when he saw a UFO that had been following him go down behind some trees. Turner said he drove home and got his CB walkie-talkie. "When I turned it on, there were two women talking on the channel. One of them goes by the nickname 'Blondie.' They talked for awhile, then I heard the strange and uncanny sound I heard be fore. I knew the spacemen were going to talk. Then the voice of a man came on and he was talking in an unknown language. Someone answered his call in the same language. Then the women came back on, then I heard the man's voice again. This time it seemed almost as if I could understand him. It sounded as if he said, 'Ungunther, that's a bad ship to be on.'"

In his diary, Turner reported sighting UFOs south of Dayton on Dec. 2, Dec. 13 and again on Dec. 15. Turner ended his diary on Christmas Day 1970 with the report that a UFO followed him from Middletown to Dayton.

Today, Turner says he sees things now and then that are "out of the ordinary" but not with the frequency of 1970. Looking back, he says a lot of people "thought I was nuts" in those days. "A few of my closest friends believed me, but that's about all."

He says he hasn't changed his mind about what he experienced eight years ago. "I believe those flying objects were manned by beings from outer space and I believe they were trying to make contact with me. Maybe they really did make contact and I just wasn't sharp enough to detect it. "I know a lot of the things that happened to me were very frightening. I'll never forget them. Never."