Muscatine, Iowa, April 29. The Floyd Holladays don't know what makes their old rocking chair rock, but they wish it would stop.

More than 200 persons have seen the empty platform rocker rocking. Some say the chair is haunted. Holladay says he doesn't believe believe in the supernatural. But he can't explain why the chair has rocked almost steadily for 37 days. Holladay's wife says the rocker scares her.

The Holladays bought the chair in 1942. It was just a chair until the family moved into a house they rented from their relatives, Mr. and Mrs. Floyd Brossart. Brossart died March 17. Six days later the chair started rocking.

Visitors suggested the rocking was caused by vibrations from a refrigerator motor or hot air from a register. But Holladay says they moved the chair into every room in the house. They have even examined its insides. The chair rocks anyway. Holladay says the ghost "will have to put up with me sitting on its lap when I feel like using the chair." 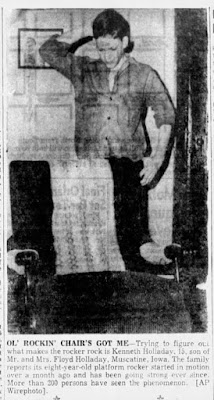 A follow-up story appeared in the "Baytown Sun" on May 2:


The Floyd Holladays said today they are going to sell their rocking chair that rocks by itself, "if the price is right."

It's not that the chair is getting on their nerves, they said, only that the mysterious rocking is attracting too many visitors to their home.

Hundreds of curious from all parts of Eastern Iowa flocked to the six-room frame home of Mr. and Mrs. Floyd Holladay to see for themselves whether the rocker really rocks.

The throngs went away convinced, and so were hard-bitten newsmen who poked at the chair and moved it around, but failed to stop its rocking.

The Holladays said the chair was just an ordinary, red-upholstered rocker for eight years. It rocked when someone sat down and moved it back and forth. But for a little more than a month now, they said, the chair has been rocking of its own accord, particularly when someone was talking about it. No matter where the Holladays moved the chair in their house, they said, it kept up its rocking.

Roy Luce, news director of Radio Station .KWPC in Muscatine, said he gave the chair a close eye and found that "it rocks most of the time." Luce and other newsmen moved the chair outside the house, and it continued to rock. Luce said it "tried" to rock when he sat down in it, and others who tested it said the same thing.

Later in May, the rocking chair made a special appearance on the TV show "We the People." It...well, it rocked. A "where are they now" story on the rocker appeared in the "Des Moines Register" on November 25, 1954:


Remember the mysterious rocking chair of Muscatine which made a spectacular television appearance appearance four years ago in New York? The chair !s still rocking, just as mysteriously, but not quite as persistently.

On May 12, 1950, Mr. and Mrs. Floyd Holladay of Muscatine presented their rocking chair on the National Broadcasting Broadcasting Company's "We the People." The vast TV audience throughout the country saw just what an almost continuous stream of.people at the Holladay residence in Muscatine had been seeing: the rocking chair, rocking violently. Without a push to start it, the red upholstered platform rocker rocked back and forth, slowly at first, then energetically. It would slow down, then speed up, while continuing to rock hour after hour in its special exhibition space at the NBC studio.

No one ever gave a satisfactory explanation of why the chair rocked, although several seers and magicians inspected it. After its TV debut the chair was crated up and taken to the airport for shipment back to Muscatine. Mr. and Mrs. Holladay left on an early plane and the chair followed. When it arrived,and was uncrated, the Holladays discovered that vandals had ripped the upholstering and torn up the inside web and bracing of the back.

"I tried to straighten the inside material out and I tacked the upholstering back again," Mrs. Holladay said. "The chair would still rock, but just for short periods. It would not start up by itself, or gain speed in rocking as it formerly did.

"It still rocks, perhaps for periods of five to 10 minute duration. But it hasn't been the same since it was torn up."

The chair, which originally cost about $70 at a Muscatine furniture store, had been insured for $1,000 by sponsors of the TV show. The insurance covered its air shipment. An investigation disclosed the damage had been done by unidentified persons at the air freight depot at New York.

The insurance company offered to pay the full amount of the $1,000 policy and keep the chair, or settle for $700, with the chair remaining in the Holladay's possession.

"We decided to keep the chair, and we settled for the $700," Holladay said.

At present the chair is just another piece of furniture in an upstairs bedroom at the Holladay residence. The bedroom is used only occasionally and most of the furnishing there, like the chair, is in the room principally for storage.

It was in March of 1950, about six weeks before the TV presentation, that the chair began its uncanny rocking. Mrs. Holladay said the chair began rocking five days after her brother-in-law, Floyd Brossart, died Mar. 17. It was his favorite chair when he visited the Holladay residence, she said. Day after day, the chair rocked. It might slow down, but soon it would start up.

News of it spread throughout the neighborhood and across town. Dozens of visitors began to arrive. The story flashed across the nation and long lines of the curious appeared at the Holladay residence. Mrs. Holladay, a pleasant woman with an exceptional amount of patience, admitted all comers and answered all questions. She declined to charge admission as some suggested but neighbors finally insisted that provisions be made for a collection. They placed a glass jar at the door, with a card suggesting donations. About $60 in coins were collected, just enough to cover dry cleaning costs for rugs and furniture and minor damage inflicted by the steady procession of visitors.

Among those who inspected the rocker was a Muscatine High School science teacher. He advanced a theory which dealt with vibrations from traffic and the characteristics of the house's foundation. At the New York demonstration, Joseph Dunninger, "mentalist" and chairman of the Universal Council for Psychic Research, inspected the chair. "This chair rocks. So what? It's a rare physical phenomenon, not a psychic one. Perfect balance, that's why."

Mrs. Holladay did not accept this theory. She recalled the chair had been knocked about a bit, used in different places, and at one time repaired by some home carpentry which was pretty amateurish and unbalancing. "I don't think delicate balance, traffic vibrations, or anything like that could account for the rocking," Mrs. Holladay said.

Another observer at the New York demonstration, Henry Roberts, editor of the Prophecies of Nostradamus, said he, too, disagreed with the explanations based on physical nature. "The basis is purely psychic," he said. "That chair, I feel, has a psychometric quality of the person who sat in it, a fourth dimensional objectivity."

Mrs. Holladay has no psychic theory of her own. But she recalled that it was five days after her brother-in-law's death that the chair began began to rock. Correspondence about the chair poured into the Holladay's mailbox. The letters saved would fill a bushel basket. Some wanted to buy the chair; others were just curious. Mail still comes in and sometimes there is a caller who wants to see the chair. But for all practical purposes the old platform rocker now is just another piece of furniture in an upstairs bedroom. 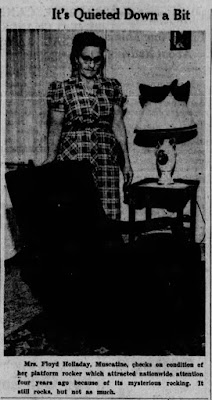 What finally became of the once-celebrated rocker is unknown. Many years later, one of the Holladay children recollected that the family eventually gave the chair to a relative, and it subsequently disappeared from history.

So for all I know the damn thing is still rocking somewhere.
Posted by Undine at 4:43 AM