The Strange Exit of Donald Kemp 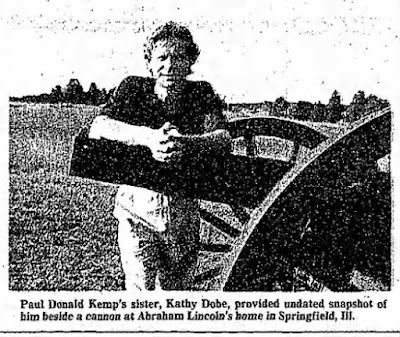 For many years now, I've believed that what we call "weird" or "unusual" is, rather, the default position of the universe. What we think of as "normality" is a very rare and precious thing indeed. Strange, inexplicable things are thrown at us every day, but unless they seriously impact our lives, we are able to ignore them or explain them away to ourselves.

There is, for example, the fate of a New York man named Donald Kemp, which ranks as the most bizarre missing-persons case I've ever seen. His end was comprised of many smaller mysteries combined to cause one massive mystery...

...and he started out as such a perfectly ordinary guy.

Kemp's life had appeared unusually fortunate. The 35-year-old ad executive was successful at his job, intelligent, well-liked, and prosperous. Still, he began to be unsatisfied with his lot. A bad case of the "Is this all there is?" blues set in. After he became disabled from a 1976 auto accident, his two-year period of recuperation intensified these feelings of restlessness and dissatisfaction. In September 1982, this normally ambitious, meticulous man abandoned his life and headed for Jackson, Wyoming. Kemp had long been fascinated by the Lincoln assassination, and he decided to pursue his dream of writing a book about the tragic event. During his convalescence, he believed he took mental voyages to the "spirit world," where he was in touch with Mary Surratt, the woman hanged as a co-conspirator in Lincoln's murder. His book, he told friends, would combine Lincoln, spiritualism, and what he enigmatically described as "The Truth." "I have The Truth," he once said. "The Truth will come through me...I am attuned to a high spiritual plane...I am a messenger of God." On November 15, Kemp visited a museum in Cheyenne. He stayed for about two hours without speaking to anyone. After his departure, it was found that he had left behind his briefcase containing his diaries, address book, traveler's checks and his prescription eyeglasses.

If Kemp was God's messenger, the communication he delivered was intensely odd. On November 16, 1982, when he was two days short of his destination, his van was found on an exit ramp in a deserted stretch of road in central Wyoming. The vehicle's motor was running, the radio was playing, and all the doors were open. It seemed like he had planned only a very brief stop.

Instead, Don Kemp had vanished. A single set of footprints led from the van into the emptiness of the Wyoming prairie. While following this trail, searchers found Kemp's teapot. Four miles away, three of his socks were found in an abandoned barn. A few days later his laundry bag was discovered inside a haystack. There was, however, no body found, or any other clue where Kemp went or, perhaps even more importantly, why he went. Rod Johnson, the Deputy Sheriff in charge of the search, was at a loss to say what had become of Kemp. "I don't think he's out there," Johnson sighed. "If he was, I would have found him." Kemp's mother Mary quit her job to devote all her time to finding her son. She was convinced that he had been kidnapped for whatever inexplicable reason, and was still alive. "He didn't disappear into thin air," she said. "My son would not do this." A friend of Kemp's had a more pessimistic view. "I think poor Don was sitting on the fence of reality, and as he was driving down the highway he finally crossed over to the other side of the fence. I think he saw some sign in the desert and walked off." There were signs that just before he vanished, Kemp's mind was going into some dark places. One friend received a phone call from him where Kemp was sobbing and near-hysterical. When he stopped at motels, Kemp was fixated by movies with themes of disappearances. His final diary entry proclaimed himself to be "an emancipator of men."

A major blizzard hit the area several days after Kemp's disappearance, leading investigators to conclude the missing man was now certainly dead. No one, they concluded, could possibly have survived in that weather.

This is when our story goes from merely mysterious to impossibly weird. Three months after Kemp vanished, a friend of his named Judith Aiello returned to her New York home from a long vacation in Europe. Aiello had been out of the country for so long, she was unaware that Kemp was missing. She found a number of messages on her telephone answering machine...from a voice that she swore was that of Donald Kemp. The messages were very brief, merely asking her to call him back. The voice left a phone number where he could be reached.

When Aiello dialed this number, a man answered. She told investigators that when she asked him if Don Kemp was there, "He said 'Yes--no,' very quickly." When she said to tell Kemp that "Judy called," the man simply said "Fine," and hung up.

This number was traced to a house trailer in Casper, Wyoming. Mark Dennis, the man who lived there, insisted that he had not made those phone calls. He vowed that he had never even heard of Kemp, and certainly had no idea where he was. "It is bizarre," Dennis said. "It's puzzling. Nothing this strange has ever happened to me before. The only explanation I can think of is somebody got in my house to make the phone calls." As Aiello's number was unlisted, it could not be explained how Dennis--or any other stranger to Aiello--could have phoned her. Unsurprisingly, Dennis became the subject of intense interest to the police, but investigators could find no evidence whatsoever that he had anything to do with Kemp or his baffling disappearance. Adding to the eerie quality of the whole episode is that Dennis bore a startling resemblance to the missing man. Although Dennis was initially very cooperative with police, he eventually "lawyered up" and stopped talking. After Dennis was confronted by a very accusatory Mary Kemp--who refused to believe he did not know much more than he was willing to say--he quickly left town. (It must be said that all this can easily be read as the actions of a perfectly innocent man understandably frightened at finding himself mixed up in a particularly strange mystery.)

The phone calls to Aiello were not the only clues suggesting Kemp was still alive. Some people were certain that they saw him at an exhibit of Lincoln memorabilia held in Casper. Others believed they had spotted him in a Casper bar. However, hopes that the elusive ad executive had survived were dashed in 1986, when hunters found his badly decomposed remains just a few miles from where his van had been found. No sign of foul play was discovered, (although it's hard to figure how that could be established after such a long period of time,) leaving the authorities to conclude that Kemp voluntarily walked into the wild, where he probably died during the blizzard.

A very tidy solution...until you start thinking about those phone calls. If Kemp did not make these calls, who did, and why? Why was Aiello the only person to get these cryptic messages? Is it possible that Kemp did make these calls? Was he, as some have theorized, kidnapped, only to be murdered by his abductors and dumped where he was found? This theory, outlandish as it may sound, would at least explain the puzzling fact that it took so long for his body to be found on that flat, open, barren terrain.

In some of the wilder corners of the internet, it has even been suggested that his scholarly interest in the Lincoln assassination did him in. Did his research into the case lead him to stumble upon some "great secret" that forced shadowy powers-that-be into having him killed? Inevitably, others have proposed that the unfortunate man was kidnapped by space aliens.

On a more prosaic level, Mary Kemp maintained the darkest suspicions about Mark Dennis. She went to her grave in 2014 believing that he had killed her son, although no one was ever able to explain why this seemingly normal man would murder someone who was a complete stranger to him.

Speculate away. No matter how one looks at this case, it is damned difficult to find a "normal" answer for what happened to Donald Kemp.

[Note: In 2010, someone using the screen name "JGPiper" made several posts to an online forum discussing the Kemp mystery. This person claimed to be Kemp's sister, and provided some details that, believe it or not, just made the story even crazier. No one ever established if this person was who they claimed, or if their information was at all correct. If you're interested in going further down this particular rabbit hole, here's a link.]

http://www.sitcomsonline.com/boards/showthread.php?t=233928
Posted by Undine at 4:31 AM