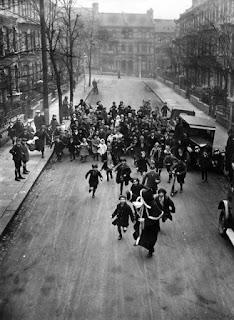 Greetings and welcome to our annual look at Christmas festivities, Strange Company style!

Let's kick things off with a news story from the "San Francisco Call," a newspaper that really knew how to put readers in the holiday spirit. (December 26, 1905)


HOUSTON. Tex.. Dec. 25.— Two men were fatally burned to-day while impersonating Santa Claus; two children were killed, one child was fatally wounded and another was seriously injured in accidents due to the holidays.

Sidney Anderson, head blacksmith in the Southern Pacific shops, arose early to take the part of Santa Claus and to complete the decoration of a Christmas tree. He dressed in an improvised costume made of tufts of cotton, and with a long flowing wig and beard of hemp. While lighting the Christmas tree his beard was fired and in a moment he was in flames. He was fatally burned before assistance came.

Roy Ramer was fatally shot by Verna Bardin, tho 12-year-old daughter of his landlady. He had presented the child and her mother with gifts, and the girl, while skipping about in excess of joy. picked up a revolver and snapped it, saying: "I will show you how good an aim I can make."

W. H. Osborn, a South End grocer, while distributing presents was burned from head to foot before the flaming garments could be torn from him.

Thelma, the 4-year-old daughter of J. L. Culpepper, was burned to death with a toy lamp. Edward Carter, aged 15. lost an arm by the explosion of a toy cannon and received other injuries from which death is expected.

Jose Milando. a Mexican boy. had placed firecrackers in his pockets and was mounting his horse to ride to his home when some one fired the crackers. The horse ran away and he was thrown and killed.


In which we discover that the residents of Queenstown, Australia have a curious taste in Christmas decorations.  (Hobart Mercury, December 26, 1952) 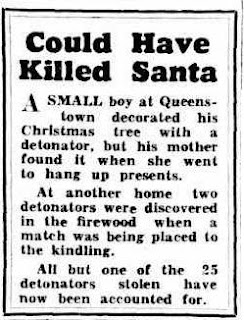 
In Connecticut, a boy shot his father dead in the middle of a domestic tiff over what decorations should be hung on the family Christmas tree.

Christmas tree bush is supposed to be as unlucky as breaking a mirror or spilling salt on Friday the 13th.

At a city hotel, where superstition is lightly regarded, a big bunch of Christmas bush was used to decorate a lounge room, regardless of the fact that to bring the bloom into a house before Christmas Day is like killing a black cat. One of the stewards was opening a bottle in the lounge a few minutes later when it exploded,cutting his hand severely. Another steward, who was just entering the lounge with a tray of glasses, got such a shock that he dropped his tray with rather dire results. And while the excitement was at its height a lady fainted. It all happened within three minutes of the first appearance of the Christmas tree in the room. Incidentally, the hotel people can't be superstitious, for the Christmas tree remained long after the two stewards, the blood, the broken glass and the fainting lady had been removed.

KANSAS CITY, December 27. Ruby Nuehle, 40, killed her husband during Christmas dinner with a revolver. She told the police that the argument started because her husband complained that nine dollars was too high a price for a turkey.


On the other hand, there may be such a thing as "too much Christmas spirit." The "Sheffield Telegraph," December 27, 1893:


An Irish labourer named James Conroy has been wandering round the town for the past few days with a burial certificate. He is too busily engaged enjoying the Christmas festivities to attend to the last sad rites connected with the death of his wife. He lives at 3 court, 1 house, Steelhouse lane, and his poor wife died on the 14th inst. The body has been awaiting burial ever since, and complaints having been made the police are searching for the labourer to get the funeral accomplished.


And, of course, we can't forget this year's selection of Bad Santas! From the "Tuscon Daily Citizen," December 13, 1968:


Stockholm--Nine jolly Santa Clauses were jailed Thursday night in the suburb of Vaellingby after they absorbed too much Christmas cheer at a party.

A police spokesman said the Santas were arrested on charges of disturbing the peace.

"These people, all dressed in Santa Claus outfits, were rowdy and kept arguing and fighting between themselves even when we locked them up," the spokesman said.


Wait until your kids learn that the toys Santa brings them are all hot. The "Buffalo Courier," December 22, 1925:

The Santa bumped into a policeman as he came out of a store with an armful of toys. He dropped the burden and ran and the policeman, startled by such conduct, caught him. He said he was, out of the red uniform, Anthony Spiegal, and under that name, instead of Santa Claus, he was held to the grand jury on a charge of burglary.


And sometimes Santa just gets wasted and talks to clocks. The "Syracuse Herald," December 15, 1903:


John Moore, who registered at the Chatham Square hotel, of the Volunteers of America, in New York, and who for several days has been stationed at Broadway and Wall street, dressed in the costume of Santa Claus and guarding a chimney which has an opening at the top into which the charitably inclined may drop coins, was a prisoner in police court Tuesday, on a charge of intoxication. Moore left his hotel to go to Wall street with his little brick chimney, but stopped in every saloon on the way. Santa Claus was found sitting on his chimney, with his white wig in one hand and his white beard in the other, talking to the big clock in the tower of Old Trinity. Santa Claus was promptly arrested.


Pro tip: A search in the digital newspaper archives for ["Any holiday" + "dynamite"] brings up the damndest things. The "San Francisco Call" for December 26, 1911, suggests that spending your Christmas party detonating explosives might not be the greatest idea.


MIDDLESBORO, Ky.; Dec. 25,—Edward Van Bever, nephew of Chief of Police Van Bever of Little Clear creek, near here, was blown to atoms tonight while discharging dynamite. Van Bever with a party of friends was celebrating Christmas. Thinking that the fuse attached to the stick of dynamite had been extinguished, he walked up to the deadly explosive to relight it. In a second an explosion followed, throwing him high in the air.


And, yes, that's quite a startling leap between the second and third sentences of the story.

I'll close with my favorite holiday story of the year. Meet two gentlemen who took "celebrating with a bang" to a whole other level. 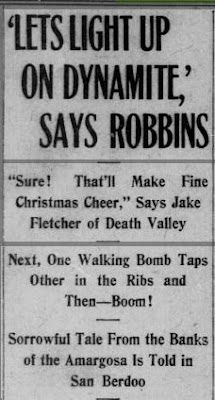 [Special Dispatch to The Call] SAN BERNARDINO. Jan. 3.— The most extraordinary tragedy ever enacted on the desert took place at Jake Fletcher's cabin on the banks of the Amargosa, near Death valley, on Christmas day. The news has Just reached civilization.

Fletcher had been doing well on his claim until recently, when the vein ran out. This left him without money to buy whisky. Thomas Robbins, a bosom friend, who was spending Thanksgiving day at Fletcher's, proposed that they try a dynamite jag. He said he had read of Mexican miners getting drunk by eating dynamite when liquor failed.

Fletcher was incredulous, but expressed his willingness to make, this experiment. Between them they consumed three sticks of dynamite during the afternoon and evening of Christmas day and became loud and boisterous in their demeanor. Fletcher was good natured and wanted to sing, but Robbins was surly and quarrelsome, and; the more dynamite he consumed the more troublesome he became.

This finally aroused Fletcher's wrath to such a pitch that he challenged Robbins to a fistic duel. Robbins was staggering slightly and Fletcher finally shot a left hook Into the man's ribs. Instantly there was a terrific explosion. The body of Robbins shot through the ceiling as though it had turned into a dynamite bomb. The concussion induced by Fletcher's blow had caused Robbins to explode. 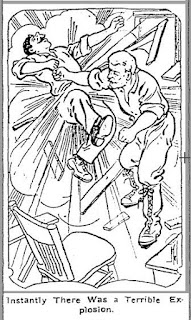 The tragedy instantly sobered Fletcher, and he called at a neighbor's cabin, where he told the story and borrowed a lantern, saying he intended to go that night to the nearest peace officer and give himself up for the crime of manslaughter. He was deeply depressed, and this feeling of melancholy must have caused him to alter his program, for he betook himself to the top of a peak about a mile away and threw himself from that point Into the ravine below.

Searchers found the shattered remains of Fletcher scattered about In the boughs of the willows that grew near the head of the ravine. He had landed in a soft spot, but the concussion had been great enough to set off the second charge of dynamite.

The miners buried what they could find of the two bodies in one grave. Since the death of Fletcher a miner who went to work on his claim rediscovered the lost ledge and is taking out ore that will run $97.98 in gold.
"San Francisco Call," January 4, 1909


The moral here is so obvious it scarcely needs repeating: Keep plenty of gin, wine, beer, and all other alcoholic liquors on hand this holiday season, lest your family and friends start breaking into the explosives.
Posted by Undine at 4:45 AM