"Why have you made me manly and strong like my brothers, only to compel me now that I am fifteen to do nothing but mumble a lot of interminable prayers?"
~From the autobiography of Catalina de Erauso. 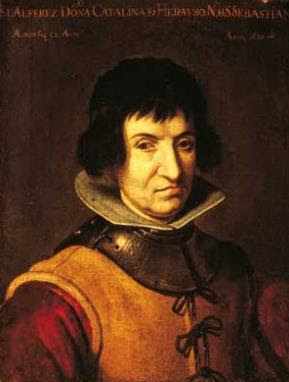 This week, we look at the story of how an once-obscure 17th century woman became one of the toughest men in the Spanish army.

Unfortunately, a good deal of what we know of Catalina de Erauso has become encrusted in exaggeration and mythology, but the bare, relatively unvarnished known facts about her life are quite remarkable enough. De Erauso was born sometime in 1592, in San Sebastian, Spain. At the age of four, her parents placed her in a nunnery, likely to spare themselves the expense of raising her rather than any sense the girl had any religious aptitude.

This proved to be a spectacularly wrong-headed career move. When Catalina was fifteen, she fled the convent before taking her final vows, determined to seek a life of adventure, not contemplation. Realizing that women warriors were not well received in her day, she disguised herself as a man, took on the grand name of “Alonso Diaz Ramirez de Guzman,” and eventually made her way to South America, where she enlisted in the army. While the tall, strongly-built de Erauso was not a terribly successful woman, the newly-christened Alonso made for a perfectly splendid man. The ex-novice had finally found her true calling.

The soldier-formerly-known-as-Catalina served in Chile and Peru, battling the local Indians. Among her commanders was her own brother, Miguel de Erauso, who never dreamed of the true identity of this dashing young fighter. (In fact, Miguel once gave her a beating after he caught her visiting his girlfriend.)  De Guzman proved to be a brave and skillful soldier, soon reaching the rank of Lieutenant.

“Alonso” was an extroverted sort with a quick temper and an itchy trigger finger. Inevitably, she found herself fighting her share of duels. In one fight, she found herself acting as a second. Serving as second to the rival fighter was her still-oblivious brother. The duel wound up getting very much out of hand, leading to her accidentally killing Miguel. Catalina was so appalled by what she had done that she deserted the army and turned traveling outlaw, thieving, gambling, and brawling with the best of them. One fight wound up nearly killing her. On what was believed to be a deathbed, Catalina, to the shock of everyone present, admitted that “he” was a “she.” Embarrassingly enough, she recuperated, after which she tactfully—and quickly—moved on.

By this point, Catalina had become notorious throughout the New World—as much for her unruly activities as for her gender—forcing her to seek protection from a Peruvian bishop. When this scandalized worthy heard her life story, he persuaded her to re-enter the cloister and do penance for her unconventionality.

News of this highly unusual fighting wom…uh, man, soon spread. De Erauso became famed throughout Europe as “The Lieutenant Nun,” and this newly-minted celebrity was eventually summoned home. She arrived in Spain in 1624, after a journey that included her usual series of adventures.

Despite the lingering grumblings in the Church, she returned to find that she had become a popular hero. Not only did the King grant her an army pension, but after she made a triumphal tour of Rome, the Pope gave her a special dispensation to wear men’s clothes. It was during this period, in 1626, that we have the only detailed contemporary description of de Erauso. The writer Pietro Della Valle described her as “Tall and sturdy of stature, masculine in appearance, she has no more bosom than a little girl. She told me she had applied I don't know what method to make it disappear. I believe it was a plaster administered by an Italian; the effect was painful but much to her liking. She is not bad looking, but well worn by the years. She has the look of a Spanish gentleman and wears her sword as big as life, tightly belted. Only by her hands can one tell that she is a woman as they are full and fleshy, although large and strong, and occasionally gesture effeminately.”

Catalina/Alonso was, however, too restless a soul to accept any sort of comfortable retirement forever. By 1645, she had hit the road again, eventually settling in what is now Mexico. There, she gained a reputation as “a very valiant and capable individual,” working as a mule driver (under the name of “Antonio de Erauso,”) until her death in 1650.

Although various plays and pamphlets about the life of the “Lieutenant Nun” began to appear as early as 1625, it was not until 1829 that her “autobiography” was published. The memoir reads like an early Dumas swashbuckler, full of accounts of her acts of heroism in battle, duels-of-honor, and love affairs with beautiful women. (“My taste…was always the pretty faces.”) It is a document as entertaining and ingratiating as it is dubious historically. (No authentic manuscript from the hand of Catalina herself is known to exist.) However, enough of the narrative has been corroborated to prove that de Erauso did exist, and was almost—if perhaps not completely—as extraordinary a character as this book claimed.

These “memoirs,” it should be said, carefully noted that her love affairs were all platonic. Modern-day historians, of course, take this claim with a great many skeptical snorts, but the erstwhile Catalina de Erauso insisted that she remained a virgin till her dying day.

After all, she wouldn’t want to offend the proprieties.
Posted by Undine at 4:36 AM

Email ThisBlogThis!Share to TwitterShare to FacebookShare to Pinterest
Labels: Catalina de Erauso, I am woman hear me horsewhip, scandal