The Murder of Caroline Luard: a Classic Edwardian Puzzle 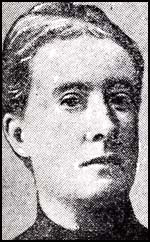 Caroline Mary Hartley was born into a wealthy English family in 1850. In 1875 she married a professional soldier named Charles Edward Luard. After a lengthy career, Charles Luard retired in 1887 with the rank of Major-General in the Royal Engineers, and he and his wife settled into the pleasantly situated home of Ightham Knoll, in Kent. During his retirement, Luard served as a Kent County Councilor, a Justice of the Peace, and a Governor of a local school, while both the Luards also kept active with the usual genteel social activities.

During their life together, there were only two known dark spots: The death of the younger of their two sons in 1903, and a curious military scandal in 1879. After British troops were defeated by the Zulu in the Battle of Isandhlwana, blame for the debacle was given mostly to a Colonel Anthony Durnford. Durnford died during the battle, and thus was conveniently unable to defend himself.

However, many in the army believed Durnford was being posthumously slandered, and that the real responsibility for the defeat rested on the heads of more senior officers, most notably Baron Chemsford. Charles Luard, with, perhaps, more loyalty than tact, was actively involved in the campaign to save Durnford's good name. His charges against certain of his fellow officers were considered so inflammatory that Luard was court-martialed and censured. However, unpleasant as the whole episode may have been, Luard was apparently able to overcome the controversy and carry on with his career.

All in all, the Luards seemed wildly unsuited to have figured in one of Britain's classic murder mysteries.

Mrs. Luard earned her unenviable place in history on August 24, 1908. At about 2:30 that afternoon, she and her husband set out for a walk, accompanied by their dog. The Major-General planned to get his clubs from his Golf Club, while Mrs. Luard simply wanted a little stroll. She planned to return home soon, as she was expecting a friend named Mary Stewart to join her for tea.

The couple walked together for about half an hour before parting ways. The Major-General went off towards the Golf Course, while, he presumed, his wife made her way home. He was seen by a number of people during his solo journey. After he had gathered up his clubs, the local vicar, a Reverend Cotton, met him on the road at 4:20 and drove him back to Ightham Knoll.

Upon entering his home, Luard was surprised to find Mrs. Stewart still waiting the arrival of his wife, and he went out in search of Caroline. At about fifteen minutes past five, he found her.

Mrs. Luard was lying dead on the verandah of the empty summer house owned by neighbors. It was in a heavily wooded area about a mile from the Luard home. Someone had shot her in the head at very close range. The three rings she had been wearing were gone. One set of footprints led away from the body. 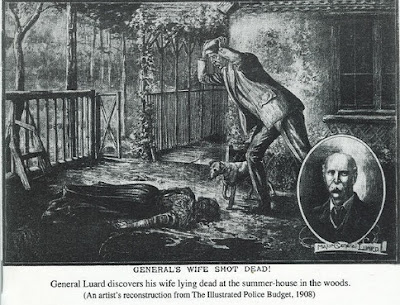 It was believed that Mrs. Luard had been killed at about 3:15, when several different witnesses heard the sound of three gunshots coming from the direction of the summer house. At that time, Major-General Luard was over a half-mile away, towards the golf course clubhouse. Bloodhounds were immediately brought on to the murder scene, but the trail they picked up went cold when they reached the main road. A clergyman driving near the murder scene around the time Mrs. Luard died told police he had seen a man with a "low type of face" emerging from the woods, but this alleged man was never found, and this possible clue went nowhere.

At the inquest, it was revealed that Mrs. Luard had been struck on the back of the head, knocking her violently to the ground. Someone then used at .320 revolver to shoot her behind the right ear and into her left cheek. The killer then removed her gloves, wrenched the rings off her hand, and fled into oblivion. The rings were never traced. It was noted that her husband did not own any guns which could have been the murder weapon. The coroner's jury returned the only possible verdict, that of "Murder by person or persons unknown."

Unfortunately, that was all anyone could say for sure about Caroline Luard's death, and the century since her death has not produced any further reliable information. The Luards appear to have been happily married, and there was no indication that this quiet, inoffensive woman had any enemies. The investigations of some crimes are hampered by a multiplicity of competing leads to follow. Others are hopelessly stymied by not having any leads at all. The Luard case is an outstanding example of the latter.

With such a lack of clues to go by, it was inevitable that rumor-mongering and baseless speculation would arise to fill that gap. Although the Major-General had no known motive, no sign of ever possessing anything that could have been the murder weapon, and as near to a cast-iron alibi as you'll find outside the pages of detective fiction, gossip quickly spread that he had shot his wife in cold blood and then stolen the rings to fool police into thinking she had been the victim of a robbery. Villagers muttered that this affluent, upper-class man was getting away with wife-murder because his influential friends were engaging in a cover-up. It was also rumored that Luard had been having an affair with a local woman. The widower began receiving vicious anonymous letters calling him a murderer, and threatening vengeance. Luard was so rattled by these faceless, nameless taunts that he put Ightham Knoll up for sale and made plans to leave the area. In the meantime, he went to stay at the home of a friend, Colonel Charles Edward Warde.

Luard's surviving son, Charles, was serving in the army in South Africa. He was, of course, immediately informed of his mother's death. He left for England as soon as possible, landing in Southampton on September 18.

He arrived to be confronted not just by one tragedy, but two. On the morning before Charles Luard arrived home, his father rose from bed, dressed, wrote letters addressed to his son, to Charles Warde, and to his brother-in-law Tom Hartley. He then walked to the nearby railway line. As the 9:09 train from Maidstone West to Tonbridge came up the tracks, he threw himself under it. The inquest on Luard's death had a verdict that was different, but just as starkly simple as his wife's: "Suicide while temporarily insane."

Luard had left in his room a note saying, "I am sick of the scandalous and lying reports, and I cannot face my son."  His letter to Warde read:  "I am sorry to have returned your kindness and hospitality and long friendship in this way, but I am satisfied it is best to join her in the second life at once, as I can be of no further use to anyone in future in this world, of which I am tired, and in which I don't wish to live any longer.  I thought my strength was sufficient to bear up against the horrible imputations and terrible letters which I have received since that awful crime was committed which robbed me of all my happiness.  And it is so lonely.  And the goodness, kindness, and sympathy of so many friends kept me going but somehow now the last day or two something seems to have snapped.  The strength has left me, and I care for nothing except to join her again.  So good-bye, dear friend, to both of us."

At the inquest, the coroner made a point of accusing the poison-pen writers (who were never identified) of being morally culpable in the Major-General's demise.

Eight months after Mrs. Luard's death, a workhouse inmate named David Woodruff was arrested and charged with her murder. It was widely suspected that his arrest was a "frame-up" devised by the Chief Constable (who was the brother of Luard's friend Charles Warde,) to conveniently "solve" the murder--a suspicion that only deepened when it was immediately established that Woodruff was in prison on the day Mrs. Luard died. The embarrassed police had no choice but to free their one and only suspect.

The investigation into the Luard murder was essentially over almost as soon as it had begun, but the conspiracy theories continue vigorously to this day. The idea that Mrs. Luard was killed by a highway robber or other wandering villain is the simplest solution, and perhaps for that reason it has gotten virtually no support at all. There is a general conviction that this was a carefully pre-planned murder, committed by someone she knew.

But who could this person have been? And what motive could he or she have had?

One popular theory gives a scenario that would do Agatha Christie proud. It involves a petty professional crook named John Alexander Dickman, who was executed in 1910 for the robbery/murder of a man named John Nisbet. At the time, however, many--including some of the jurors at his trial!--had doubts about Dickman's guilt, as his conviction was based on weak circumstantial evidence. However, then-Home Secretary Winston Churchill refused all requests to commute the death sentence. A judge named Sir Sidney Orme Rowan-Hamilton, who wrote a book about the case four years later, reportedly believed Dickman was the murderer of Caroline Luard. Clarence Henry Norman, who had served as court shorthand writer during Dickman's trial and subsequently led the efforts to have his sentence overturned, claimed that Sir Sidney told him that Mrs. Luard had--without her husband's knowledge--sent Dickman money after seeing an ad he had placed in the "Times" pleading for financial help. Dickman then altered her check so it showed a larger amount. When Mrs. Luard discovered this forgery, she secretly arranged a meeting with Dickman in order to confront him with his fraud. He chose to shut her up about his thievery by murdering her. According to Norman's account, friends of the Luards--who included the judge at Dickman's trial and Winston Churchill--all colluded to indirectly punish Dickman for the Luard murder by railroading him for the killing of Nisbet.

Unfortunately, as colorful as this scenario may be, there appears to be not one scintilla of evidence to support any of it, other than Norman's hearsay. Other armchair detectives have made brave attempts to formulate scenarios where Charles Luard--using a hidden bicycle or other devious means--might, just might, have been able to swiftly and secretly change his route long enough to shoot Caroline during her walk home. (To be fair, it is true that Charles' albi only holds up if the sounds witnesses heard at 3:15 were indeed those of the gunshots that killed Caroline--something which was never absolutely proven. In the British countryside, the sound of gunshots made by hunters was commonplace.) Out of sheer desperation, a few people have even wondered if Charles Luard's court-martial might have had something to do with his wife's murder many years later. Could Mrs. Luard have been murdered by a secret lover? Or killed by her husband because she had a secret lover?

So many theories, so few facts. It is as if Caroline Luard was murdered by a phantom.