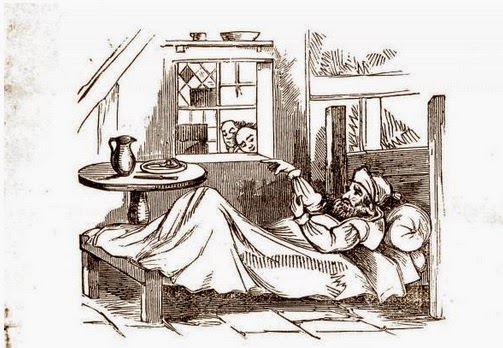 This account of the world's longest nap comes from Sabine Baring-Gould's "Yorkshire Oddities":


At Laycock, two miles west of Keighley, at a farm called "The Worlds," lived a close-fisted yeoman named Sharp, at the end of last century and the beginning of this. He carried on a small weaving business in addition to his farm, and amassed a considerable sum of money. The story goes that on one occasion old Sharp brought a piece of cloth to the Keighley tailor and told him to make a coat for him out of it. The tailor on measuring the farmer pronounced the cloth to be insufficient to allow of tails to the coat, and asked what he was to do under the circumstances. "Tho' mun make it three laps,"—i.e., any way. The expression stuck to him, and till the day of his death the name of "Three Laps" adhered to him, when it passed to his still more eccentric son.

This son, William Sharp, for a while followed the trade of a weaver, but was more inclined to range the moors with his gun than stick to his loom; and the evenings generally found him in the bar of the " Devonshire Inn " at Keighley, the landlord of which was a Mr. Morgan. Young Three Laps was fond of chaffing his boon companions. On one occasion he encountered a commercial traveller in the timber trade, and began his banter by asking him the price of a pair of mahogany "laithe" (barn) doors. The traveller, prompted by Mr. Morgan, drew him out, and booked his order. After some weeks the invoice of mahogany barn-doors, price upwards of £30, was forwarded to William Sharp. Young Three Laps was beside his wits with dismay, and had recourse to Mr. Morgan, and through his intervention the imaginary mahogany barn-doors were not sent.

The barmaid of the "Devonshire" was a comely, respectable young woman, the daughter of a neighbouring farmer named Smith. William Sharp fell desperately in love with the girl, proposed, and was accepted. The day for the wedding was fixed, and the young man went to Keighley Church at the appointed hour to be married. But the bride was not there. At the last moment a difficulty had arisen about the settlements. Mr. Smith could not induce Old Three Laps to bestow on his son sufficient money to support him in a married condition, and the two old men had quarrelled and torn up the settlements.

The blow was more than the mind of William Sharp could bear. He returned to "The Worlds" sulky, went to bed, and never rose from it again. For forty-nine years he kept to his bed, and refused to speak to anyone. He was just thirty years old when he thus isolated himself from society and active life, and he died in his bed at the age of seventy-nine, on March 3rd, 1856.

The room he occupied measured nine feet long and was about the same breadth. The floor was covered with stone flags, and was generally damp. In one corner was a fireplace which could be used only when the wind blew from one or two points of the compass ; the window was permanently fastened, and where some of the squares had been broken, was carefully patched with wood. At the time of his death, this window had not been opened for thirty-eight years. The sole furniture comprised an antique clock, minus weight and pendulum, the hands and face covered with a network of cobwebs; a small round table of dark oak, and a plain unvarnished four-post bedstead, entirely without hangings. In this dreary cell, whose only inlet for fresh air during thirty-eight years was the door occasionally left open, did this strange being immure himself. He obstinately refused to speak to anyone, and if spoken to even by his attendants would not answer. All trace of intelligence gradually faded away; the only faculties which remained in active exercise were those he shared with the beasts.

His father by his will made provision for the temporal wants of his eccentric son, and so secured him a constant attendant. He ate his meals regularly when brought to him, and latterly in a very singular manner, for in process of time his legs became contracted and drawn towards his body, and when about to eat his food he used to roll himself over and take his meals in a kneeling posture. He was generally cleanly in his habits. During the whole period of his self-imposed confinement he never had any serious illness, the only case of indisposition those connected with him could remember being a slight loss of appetite, caused apparently by indigestion, for two or three days—and this, notwithstanding that he ate on an average as much as any farm labourer. He certainly, physically speaking, did credit to his food, for though arrived at the age of seventy-nine years, his flesh was firm, fair and unwrinkled, save with fat, and he weighed about 240 lbs. He showed great repugnance to being seen, and whenever a stranger entered his den he immediately buried his head in the bed-clothes. About a week before his death his appetite began to fail; his limbs became partially benumbed, so that he could not roll himself over to take his food in his accustomed posture.

From this attack he seemed to rally, and no apprehensions were entertained that the attack would prove fatal, till the evening before his death.

However, during the night he rapidly became worse, and expired at four a.m. on Monday, March 3rd, 1856.

He was buried in Keighley Churchyard on the 7th of March, amidst crowds who had come from all parts of the neighbourhood to witness the scene. The coffin excited considerable attention from its extraordinary shape, as his body could not be straightened, the muscles of the knees and thighs being contracted. It was an oak chest, two feet four inches in depth. The weight was so great that it required eight men with strong ropes to lower it into the grave. It was thought to weigh with its contents 480 lbs.

A gentleman who visited Old Three Laps before his death has given the following account of what he saw :—

"If you chance to go a-skating 'to the Tarn,' and want a fine bracing walk, keep on the Sutton road about a mile, and you will come to an avenue of larch, not in a very thriving state, but sufficient to indicate that some one had an idea of the picturesque who planted the trees, although the house at the top of the avenue has not a very attractive appearance. You have now reached 'World's End,' and save here and there a solitary farm, with its cold stone buildings and treeless fields, there are few signs of life between you and the wide and boundless moors of Yorkshire and Lancashire. On the opposite hill, right up in the clouds, is 'Tewett Hall,' the residence of a Bradford Town Councillor. He alone, in this part, seems to follow Three Laps' ancestors' plan of planting, and in a few years we may expect to see a fine belt of timber on the verge of the horizon, a sight that will cheer the heart of some future Dr. Syntax when in search of the picturesque. At this place Three Laps 'took his bed,' and in a little parlour, with a northern light, the sill of which is level with the field, the floor cold and damp, and meanly furnished, it was my privilege to see Three Laps some twenty-five years ago. To gain admission we had some difficulty; but with the assistance of the farmer and a tin of tobacco to the nurse, who was an inveterate smoker, we were shown into his bedroom. As soon as he heard strangers, he pulled the bed-clothes over his head, which the nurse with considerable force removed, and uncovered his body, which was devoid of every vestige of body-linen. A more startling and sickening sight I never saw. Nebuchadnezzar rushed into my mind. Three Laps covered his face with his hands, his fingers being like birds' claws, while, with his legs drawn under his body, he had the appearance of a huge beast. He had white hair, and a very handsome head, well set on a strong chest. His body and all about him was scrupulously clean, and his condition healthy, as his nurse proudly pointed out, digging her fist furiously into his ribs. He gave no signs of joy or pain, but lay like a mass of inanimate matter. It struck me at the time that his limbs were stiff; but a neighbour of his, who after his dinner stole a peep into his bedroom window, told me that he found him playing with his plate in the manner of a Chinese juggler, and with considerable ability. On my informant tapping the window, he vanished under the bedclothes.

"Such was the life of the strange man who for love of a woman never left this obscure room for nearly half a century."