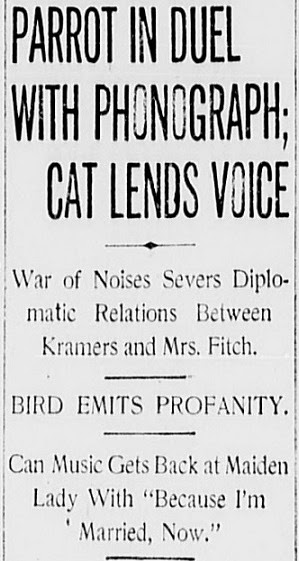 This lovely story of neighborly friendliness comes to us from the "New York Evening World" for March 4, 1909:

There were peace and quiet and the blessings thereof in the apartment house at No. 137 Main street, Astoria, until Mrs. Louis Kramer bought a phonograph and Miss Laura Fitch, who lives across the hall from her, invested in a green parrot with red trimmings and a black and white cat.

There is an extension roof behind the Fitch domicile, and on this the black and white cat was wont to walk of nights and lift his soul in song. During the day Miss Fitch's parrot hung out of the window and as the bird made the voyage north in the forecastle of a lime-juicer its vocabulary was extensive and profane.

One morning there came to Miss Fitch a polite little note risking her to restrain her parrot by day and her cat by night that her days might be long in the apartment house. Miss Fitch sent back word that providing the Kramers would please turn off their phonograph and trade it for a smoking table or a butter dish she would be glad to do so. Here diplomatic relations were severed and both sides ordered up their artillery.

Mrs. Kramer planted her heaviest gun--the phonograph--in the window opposite Miss Fitch's . Here, in rain and shine it ground out "Because I'm Mar-r-r-ied Now," which was distinctly annoying to Miss Fitch, who has passed the age when women usually contract matrimonial alliances.

Then, according to Mrs. Kramer, Miss Fitch taught her parrot to say, "Wash your dirty kids, wash your dirty kids," and fed it red pepper and lumps of sugar as a reward when Mrs. Kramer appeared at her window and scowled. Miss Fitch says the Kramers rigged up a hose and sprayed her bird with it to douse his spirits. Mrs. Kramer says Miss Fitch retaliated by throwing potatoes at the phonograph. Several of these missiles fell on the head of Louis Anspacher, the janitor, last week while he was doing chores in the backyard, and what he said to Miss Fitch only fed the flame of warfare in that militant little lady's heart.

Mrs. Kramer says that Miss Fitch deliberately allowed her scraggly old black-and-white Tom to go out and serenade all the eligible tabbies in the neighborhood with the express purpose of keeping Mr. Kramer--"a hardworking man if ever there was one"--from his slumbers. Miss Fitch goes as far as to say that Mr. Kramer cultivated his natural tendency to snore till dishes fell from the rack in her kitchen beneath the thunderous diapason of his nose music.

And all the while the phonograph kept wheezing--it had grown wheezy now--"Because I'm-m-m-m m-m-m-mar-r-i-bzzzzz-n-bz-z-z-now-&xx." And the parrot yelled, "Wash your dirty kids! Wash your dirty kids!" urged to a frantic stage by the sight of favorite foods, till its voice grew cracked.

Then the ladles took up letter writing, and today Mrs. Kramer had Miss Fitch summoned to the Long Island City Court to explain why she had written three letters that contained all sorts of unladylike things. Miss Fitch was martial and unashamed when she marched into court. From their station at one site of the magisterial bench the allied forces of the Kramers glared at her.

"Yes, I wrote two of the letters, Your Honor," fearlessly spoke up Miss Fitch. "I guess they stung. I hope they did," and she tucked her umbrella akimbo, as if it were a rifle.

The janitor was in court to testify about the potatoes.

"I guess they gave him 50 cents to do that," commented Miss Fitch.

"Now, you ladies go home," said Magistrate Smith, "and you"--to the janitor--"report to me any further disturbances, and if there are any I shall order the landlord to evict you both."

"I bane sure skall," said the janitor, rubbing his head where the vegetable missiles had hit it.

I have a suspicion the warfare did not end there, but after this story the battling neighbors disappear from recorded history.

Perhaps that is just as well.  Frankly, Miss Fitch scares the life out of me.
Posted by Undine at 4:39 AM