Murder by Telegram; or, The Mystery of the Foul Fowl

In June of 1931, the life of 28-year-old army lieutenant Herbert "Hugh" Chevis looked pretty darn good. He was happily married, prosperous, and well-liked by everyone who knew him. He had no known enemies or any notable personal difficulties.  His life seemed almost disarmingly fortunate.

If you are a regular reader of my blog, you're already guessing that this state of affairs did not last long.

Lieutenant Chevis was living in a bungalow at Blackdown Camp, near Aldershot, England. His wife of six months, a wealthy and glamorous woman named Frances Rollason, still had a flat in London, where her three children from a previous marriage lived, but she often joined him in his military quarters. On June 20, the Chevises ordered two partridges from a local poulterer. When they arrived at the bungalow, their cook, Ellen Yeomans, placed them in a meat-safe outside the building, where they remained until it was time to prepare them for the evening meal.

At the dinner table, Chevis was given the larger of the two partridges. (Mrs. Chevis did not care for partridge; she only served it because it was a favorite of her husband's.)  When he began to eat, he announced that the bird tasted horrible. Mrs. Chevis gingerly tasted a piece from his plate, and agreed that it "left a filthy taste." She thought her own partridge tasted merely "fusty." Chevis ordered his batman to remove the partridges and have them destroyed, to ensure that their dog would not get at them.  Mrs. Yeomans obediently put the remains of the birds into the kitchen fire.  This was destruction of what would later have been extremely valuable evidence.

Not long after sampling this peculiarly distasteful dinner, Chevis became extremely ill, and soon fell into frightful convulsions. The lieutenant was rushed to the hospital, but little could be done for him. After a night of dreadful suffering, Chevis died early the next morning. Mrs. Chevis also became sick, but recovered. Tests showed that the lieutenant died of strychnine poisoning.

Although the partridges had already been disposed of by the time Chevis was hospitalized, strychnine was found in the remains of the juice in which the birds had been cooked. A Home Office analyst calculated that for so small an amount of meat to kill Chevis, the birds must have been heavily impregnated with the poison. The presumption was that someone managed to sneak over to the meat-safe--it was never made clear if it was kept locked or not--and injected the partridges with a concentrated solution of strychnine. (All the other birds sold by the poulterer were examined, and found to be completely normal.)

Not only was no convincing motive for the poisoning ever found, the identity of the killer remains an utter mystery. It must have been someone close enough to Chevis to be familiar with the layout of the bungalow and the location of the meat-safe--but who? Further complicating the mystery is the fact that the safe was surrounded by neighboring bungalows, and the back yard was guarded by Chevis' dog, who was known to bark at strangers. Any outsider trying to sneak into the yard was running an enormous risk of being caught.

What made this already unsettling case uniquely creepy were the messages sent after the crime. On the day Herbert Chevis was buried, his father, Sir William Chevis, received a telegram from Dublin. All it contained were the words, "Hooray. Hooray. Hooray." Sir William's address was not listed in any directory and his name had yet to be mentioned in newspaper reports about the death, which suggested that the writer was someone who knew the family, rather than some random crank. All the police could learn about this sinister message was that it had been written by someone who signed his name as "J. Hartigan," giving as an address the Hibernian Hotel. Investigation showed that no one by the name of "Hartigan" had been staying at the Hibernian. No one associated with Chevis knew anyone by the name of "Hartigan," and the dead man had no known connection with Ireland. Some newspaper reports indicated that a man who bought strychnine in Dublin a few days before Chevis' death matched the description of the man who sent the "Hooray" telegram, but even if this was true, it did not help in determining his identity.

The police interviewed dozens of witnesses and potential suspects, including Frances Chevis and her ex-husband, but everyone questioned had either unassailable alibis or no discernible motive, or, most frequently, both.  Desperate to solve the mystery, it was even suggested that the poisoning was accidental.  Perhaps Chevis' partridge had, while still alive, ingested some poison that killed both the bird and the man who later ate it?  That theory, although still vaguely tossed around by crime historians, is so unlikely that it is difficult to take it seriously.  The poisoning almost had to have been an "inside job"--that is to say, someone in the household--but then, who sent the telegram from Ireland? Or did "J. Hartigan" have nothing to do with the poisoning? Could he have simply been someone with a personal grudge against the Chevis family who decided to cruelly gloat over the tragedy?

After a local paper, the "Daily Sketch," published a photograph of the telegram, the editor received a postcard. It read, "Why did you publish the picture of the 'Hooray' telegram?" It was signed, "J. Hartigan." (However, some students of this case believe that this message was a hoax, written by someone other than the original "Hartigan.") 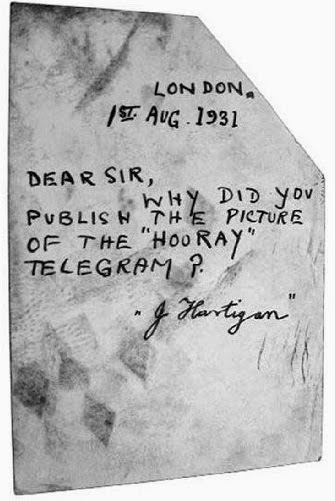 Soon afterwards, Sir William Chevis also received a postcard signed "J. Hartigan." It had been mailed from Belfast, but it is uncertain whether this was really from the sender of the Ireland telegram. All the card said was, "It is a mystery they will never solve. Hooray."

Unfortunately, the sender was quite right.
Posted by Undine at 4:41 AM