Springfield, Jan. 11--Police today were trying to unravel the mystery of the breaking glass at the home of Mrs. Charles Papineau, 80, on Butler Street.

She reported to police yesterday that 39 windows in her home broke during the past week.

"I'm scared to death," she said, adding, "it has been awful to see windows breaking all around you."

Police inspected the home but said they could find no explanation.

Mrs. Papineau said 11 panes broke last Tuesday throughout the day. The next day 18 more broke and since then 10 others broke.

She said she spent $95 to have the first batch replaced, but now she is blocking the broken areas with cardboard.

Edward R. Quinton, who repaired the first batch of windows, could offer no explanation. "I never saw anything like it in 20 years," he said.

Mrs. Papineau's grandson, Wayne, said that the breaking seemed to be accompanied by a thumping sound, sometimes two or three. But he, too, could not explain. 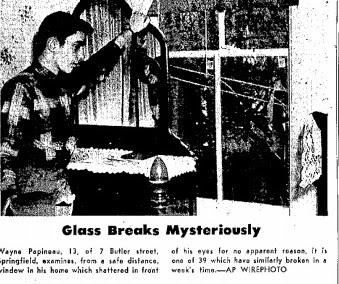 Two days later, the same paper carried a sequel to this story:

Ghost hunter John C. Parker matched wits with what he believes is a "poltergeist" last night but had no luck.

Parker, an architect by trade, spent two hours with an extremely sensitive thermometer, prowling the home of Mrs. Charles Papineau, an 80-year-old widow, in search of the "noisy ghost."

During the past two weeks, 39 windows in Mrs. Papineau's house have shattered mysteriously, some before her eyes. Parker thinks it's supernatural. Police think they may have found a very rational explanation. Mrs. Papineau doesn't know what to think.

Parker said the thermometer would show any sudden drops in temperature, an indication, he said, that a ghost is present. During his two-hour stay, however, the mercury barely budged.

Today he plans to install plexi-glass panes in some window frames and coat them with a special spray which will show the marks of any external force. The windows reportedly break from the outside into the home.

Parker scoffed when told police were questioning a 12-year-old boy in connection with the mysterious window breakings. Investigators said the youngster had a pocketful of newspaper clippings concerning the incidents and added that he had been experimenting with a Christmas chemistry set.

"The only way that anyone could break a window with that set," Parker said, "would be to throw the whole thing through the window."

Police said they had no proof of the youngster's guilt and added that the investigation would remain open. But they said they were confident no more windows would be broken.

There have been no windows broken in the woman's home since last Tuesday but this hasn't sered to quiet Mrs. Papineau to any great extent.


Thankfully for the beleaguered Mrs. Papineau, the window-smashing did indeed eventually cease, but the cause of the breakage seems to have remained a mystery.

And now I am going to have this song running through my head for the rest of the day.