The Two Lives of Dorothy Eady 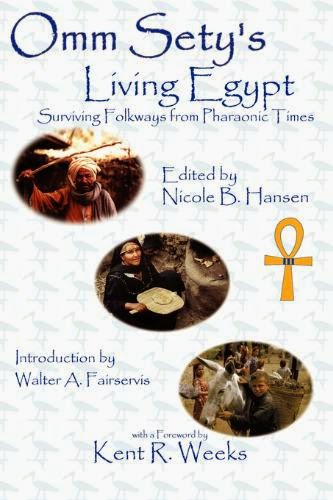 Dorothy Eady began life as a pleasantly ordinary little girl, who gave no indication of becoming anything unusual. Then, when she was still a small child, Eady had a terrible fall. This accident sent her tumbling head-first into The Weird.

In 1907, the three-year-old girl fell down a flight of stairs in her London home, and a doctor pronounced her dead. Soon afterward, however, she had a miraculous revival. However, her relieved parents became increasingly disquieted to find that she had become a completely different, and very peculiar, child. Little Dorothy suddenly treated her surroundings with disdain, begging to be “brought home.” She could not express what “home” was until she was brought on a visit to the British Museum. When she saw an exhibit dealing with ancient Egypt, she immediately became very excited, crying, “These are my people.”  When she saw a photograph of the temple of Pharaoh Sety I (1290-1279 BC,) she insisted she had found her old “home.” After that, she haunted the Museum as often as she could, gazing at their Egyptian artifacts, and even reverently kissing the feet of the statues. During one of her visits, she met the great Egyptologist E. A. Wallis Budge, who encouraged her obsession with Egypt and helped her study hieroglyphs. (She later said that she had no need to “learn” hieroglyphs—she just required some help in “remembering” them.)

When she was fifteen, she announced that Sety I had begun visiting her at night. Not surprisingly, this development led her to be placed in sanatoriums several times, but nothing could shake her calm determination that her true life—the only one that mattered at all to her—had been in Sety’s Egypt.

When she was 27, Eady got a job writing for an Egyptian-oriented magazine based in London. During this period, she met an Egyptian student, Eman Abdel Meguid. She married him in 1931, largely, it seems, because he provided her with a way to “return home” to Egypt. Not long after the couple settled in Cairo, they had a son she named Sety. She continued to assert that she was visited by the old Egyptian gods. According to Eady, among these nightly visitors was the god Ho-Ra, who dictated to her the story of her previous existence. According to this account, she had been a girl named Bentreshyt who lived during the reign of Sety I. When she was three, her widowed father placed her in the temple of Kom e-Sultan, where she was raised to be a priestess. Despite the fact that she had taken vows of virginity, when she was still in her early teens she and Sety secretly became lovers. When Bentreshyt learned she was pregnant, she committed suicide rather than face the scandal and probable death sentence.

Eady made no secret of all this—if nothing else, she was always a woman with the courage of her convictions—with the result that her conventional, upper-class husband and in-laws became increasingly spooked by her. In 1935, she and Meguid separated, and she went off to work for the Department of Antiquities, where she impressed everyone with her passion and instinctive skill for Egyptian archaeology. Although she had no formal education on the topic, she wrote many highly-regarded articles and books that gave her a prominent place in contemporary Egyptology.

Eady lived the life of an ancient Egyptian woman to the fullest extent that the 20th-century world permitted. She prayed to the old gods, left offerings at the ruins of their temples, and frequently spent the night in the Great Pyramid, communing with who-knows-what. Unlike most obsessives, however, she maintained a respect for opposing views. She would fast with her Muslim neighbors during Ramadan, celebrate Christmas with the Christians, and cheerfully deflect comments on her eccentricity with the calm certitude of one who is sure she is in the right.

After all, priestesses who are hand-in-glove with the gods don’t need to take guff from anyone.

In 1956, the research project that employed her came to an end, leaving Eady without a job. She accepted—on Sety’s advice, she said—a position as a draftsperson in Abydos. While living there, she became known as “Omm Sety” (“Mother of Sety”) a designation she greatly preferred over her birth name. Although her new position paid poorly, she reveled in it, because she believed she had lived in Abydos’ Temple of Sety in her previous life. Even the many skeptics around her were amazed by her intimate knowledge of the site—often, knowledge that she could not have obtained by any conventional means. Although most were reluctant to believe that she had gained this knowledge from her incarnation as a priestess, they were at a loss to explain how she had gained it.

For the first time since her fateful tumble down the stairs those many years ago, Eady was happy and at peace. After all those centuries of waiting, she felt she had finally come home. She was also comforted by the belief that if she led a “chaste” life, that would atone for the “sin” she had committed in her previous incarnation.

Her deep knowledge of Egyptian folklore gained her something of a local reputation as a healer, or “white witch.” The locals would come to her with their illnesses or personal problems, and she would use rituals from the Pyramid Texts or folk medicine to cure them. She claimed a 100% success rate. “Magic in ancient Egypt was a science,” she once said. “It was really magic, and it worked.” She concentrated on using her powers for good, rather than evil, although there are some hints that if someone deliberately harmed her, she could and did dish out highly unusual forms of payback. She had a particular aptitude for documenting how many practices followed throughout the Middle East in the present day are directly related to ancient Egyptian customs.

Eady worked for the Antiquities Department until 1969. She translated and cataloged inscriptions found on the ruins, prepared drawings of the Temple of Sety’s architecture, and assisted archaeologists with their excavations. (She was considered “indispensable” for any serious archaeological mission in the Abydos area.) Her co-workers were awed by her “uncanny sixth sense” about the Temple and its surroundings. She claimed to often have “astral dreams” where she traveled back to Egypt as it had been in her former life—visions that always proved to be unsettlingly accurate. After her retirement, she remained a consultant for the Department, as well as a tour guide for the Temple. She stated that she still received visits from Sety, whom she saw as a source of advice and encouragement throughout her current existence.

As Eady grew older, she became an increasingly well-known and respected figure in Egyptologist circles. Although her spiritual beliefs were never fully accepted, they were at least tolerated. Her health became increasingly fragile, but for one who is convinced this life is just a progression to the next, death is nothing to dread. She only shrugged that when she came before Osiris for judgment, he “will probably give me a few dirty looks because I know I’ve committed some things I shouldn’t have.” Because both the Muslim and Christian cemeteries would not bury someone they considered “a heathen,” she built her own underground tomb, engraved with an ancient offering prayer.

Eady died on April 21, 1981. Unfortunately, the local health department refused to allow her to be buried in the tomb she had so carefully prepared, so she instead lies in an unmarked grave outside a Coptic graveyard.

Eady’s conviction that her knowledge of ancient Egypt stemmed from personal experience is, of course, far from universally accepted. However, there are no doubts about the quality of her scholarship. Scholar Kent Weeks wrote that as an ethnographer, she “has had few equals.” Conventional historians and archaeologists could not help but respect the depth and accuracy of her descriptions of Egypt’s ancient past. She was an intelligent, level-headed person who took her work very seriously, but approached life itself with a healthy dose of humor. In short, she was utterly unlike the stereotypical crackpot.

Perhaps the best answer for the mystery of Omm Sety came from writer William Golding, who met many Egyptologists who had known Eady. Golding reported that while they couldn’t quite bring themselves to believe she had truly been a reincarnated temple priestess, they all had to admit that “she had something.”
Posted by Undine at 4:57 AM