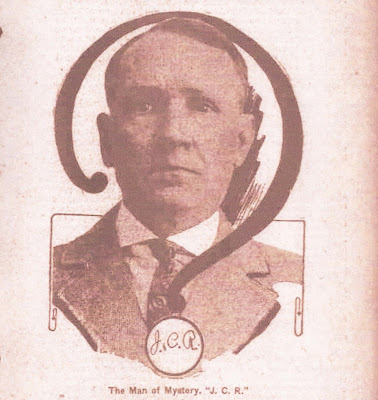 In the early 20th century, a strange missing person/amnesia case played out in the American Midwest that reads like “The Return of Martin Guerre” as written by John Webster—body count and all.

One of the first major articles to bring the puzzle to public attention was a story in Chicago’s “Day Book” newspaper on May 9, 1913, telling of a mysterious amnesiac currently in the state hospital in Rochester, Minnesota:

Who is “Aye-hee,” the man of mystery who has spent six vain years groping after his own past?

Who is “Aye-hee,” who thinks with a man’s brain, but has lost the threads of thought that hold a man’s life together and bind him to family and friends?

Here in the state hospital I have spent many hours with this tragic “Man Who Was,” who suffers the fate of Kipling’s famous character--the soldier whose hardship made him forgetful of his name, family and regiment, with only the dim knowledge that he was a British soldier.

“Aye-hee” is a sailor, whose eye brightens at mention of the American navy. He may be an officer. He is erect, dignified, well-mannered. He is not insane. His face is intelligent and his eye clear. But it clouds over as he tries to see into his own past.

He can only utter the strange word that has given him his nick-name, and write only the three letters “J. C. R."

One night in June, 1907, “Aye-hee” was found lying on the platform of the railway station at Waseca, Minn. He had had a stroke of some kind. His head was bruised. When he recovered consciousness his right side was paralyzed from toe to cheek. He could not speak or write. He understood spoken words with difficulty. And he had forgotten who he was and whence he came.

A charitable German family cared for him for a year, and Dr. W. A. Chamberlain attended him. Finally he was taken to the Rochester institution, where he has been since.

He greeted me with a smile, and a shake of his left hand. He was eager for a test. Little by little I felt my way, asking him questions covering recent years, the night at Waseca when his memory went, and the years back of that.

“What were you doing on the train,” I asked. And then, by endless questions, I gathered that he was going west--that he had come from San Francisco to New York and was on his way back. And then came the most surprising thing.

He belonged in the navy!

He had carried official dispatches.

In Kipling's story, "The Man Who Was" is brought back to self-knowledge by the sight of his old regimental quarters, and the familiar battle flags and trophies. I wondered whether this man, too, might not be capable of such an awakening.

“What was your ship?” I asked.

“Where have you voyaged? Have you been north?” He turned up his coat collar and shivered.

“Have you been with Peary?”

“Aye-hee, aye-hee!” he nodded eagerly. And after long questioning he declared it had been in 1902 or 1903. Peary was in the Arctic then.

I showed him a picture of Admiral Schley, and he went into ecstasies. He knew Schley! But he did not know whether he had sailed with him.

Dr. Arthur F. Kilbourne, superintendent of the hospital, queried the navy department at Washington, but officials there could tell nothing.

And yet SOMEBODY must know him.

Here is his picture and his story, so far as it is clear. If you have any notion who he is, call up and tell The Day Book, and the editor will be glad to co-operate with you in restoring to this man his name and identity.


The publicity “J.C.R.” received brought the patient to the attention of two aunts of a Jay Allen Caldwell, who had disappeared from his father’s ranch in Taylor, North Dakota in 1907.

The Caldwells were a curious lot. Jay Allen’s father James was an entrepreneur of questionable probity who made a fortune during the Civil War, only to lose it all in the Chicago Fire of 1871. In 1883 he started over in North Dakota, and became a wealthy rancher. However, dreadful things tended to befall everyone around him. His sister’s children died in a fire in one of his sheds. An employee vanished without a trace. Another worker was found mysteriously dead in his bed. This same man’s wife drowned in a river. James Caldwell’s wife soon died as well. And then Jay Allen exited the picture. He was known to be on very bad—even violent—terms with his father, who seems to have been a generally nasty customer, and it was rumored that James Caldwell played a role in his son’s disappearance.

The women visited the amnesiac in Rochester, but although he appeared to recognize them, and showed knowledge of Caldwell family history, they finally decided he was an inch too short to be their nephew.

Some time after this incident, a Mrs. Pitkin, a nurse at the hospital, obtained “J.C.R.'s” release by posing as his mother, and took him to the Caldwell ranch. Jay Allen’s sister May Caldwell Moran immediately recognized him as her brother, and gave descriptions of various identifying scars that matched ones found on the mystery man. He also recognized various landmarks around the area, and made a drawing illustrating how he had been assaulted by unidentified people in 1907. At least one hundred local residents agreed this was the missing Caldwell. However, Jay Allen’s father James was equally adamant this was not his son.  The elder Caldwell asserted that "J.C.R." was, in reality, the son of the nurse, Mrs. Pitkin.

A lawsuit was brought on “J.C.R.’s” behalf to establish that he was indeed Jay Allen Caldwell, but it failed, for one simple reason:  “J.C.R.” was found in Waseca two months before Jay Allen was reported missing. Despite this, May Moran took him into her own home, insisting he was her long-lost brother.

Four months after the conclusion of the court case, the Caldwells suffered yet another tragedy. In May 1917, James Caldwell and his second wife were shot to death by their hired man, Mike Chumack. Chumack claimed that he had caught Caldwell molesting a fourteen-year-old orphan girl who worked for Mrs. Caldwell. The two men quarreled, and Chumack claimed that when he brought up the issue of Jay Allen, the older man went for his gun, and Chumack was forced to kill him in self-defense.

As it turned out, the murders took place under entirely different circumstances. It was Chumack himself who was abusing the girl, and when the Caldwells caught him in the act, he killed them. He then begged the girl to shoot him, but when she refused, he tried unsuccessfully to kill himself. Chumack was eventually ruled insane and sent to a mental hospital.

James Caldwell’s will left $1000 to each of his two sisters, with the remainder of his sizable fortune going into a twenty-five year trust for Jay Allen, should he ever be found. His daughter May received a mere twenty-five dollars, presumably as punishment for her stubborn loyalty to “J.C.R.”  Over the next few years, the newspapers periodically reported "identifications" of "J.C.R." as some missing man or another, but apparently all these attempts to solve the mystery failed to last.

In 1919, a resident of St. Paul, Minnesota named Mrs. Lambert V. Blue came forward, insisting that “J.C.R.” was her former husband, James Philip Harris, who set out on a fishing trip in 1907 and never returned. It must be noted that her eagerness to claim the man stemmed from the fact that if he was the missing fisherman, Harris' daughter Dorothy stood to inherit $250,000.  After Harris disappeared, and was eventually presumed dead, the stock he owned in the merchandise company of which he was the manager reverted to the business.  Dorothy Harris and Mrs. Blue were grimly determined to get their hands on this wealth, not to mention the Florida mansion Harris had owned. 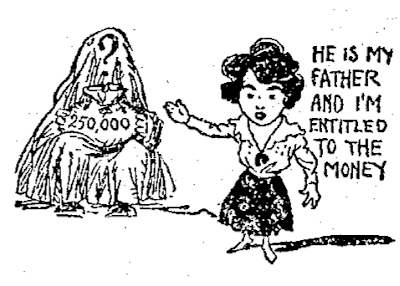 Unfortunately, this mystery man did not find a permanent home with Miss Harris or Mrs. Blue.  In 1921, it was reported that "J.C.R." had returned to North Dakota, and was living as a vagrant beggar.  I have found no further newspaper reports about him, so God knows what finally happened to the poor man.

Was “J.C.R.” Jay Allen Caldwell? James P. Harris? Or someone else altogether? Did James Caldwell have a guilty secret regarding his son’s disappearance? We will never know.
Posted by Undine at 4:55 AM