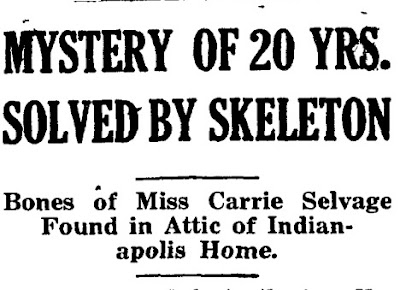 Here is a "solved" missing-persons case from 1920 that is reminiscent of our old friend Ada Constance Kent:

Indianapolis, Ind. April 26—Unsolved for more than twenty years, the mystery surrounding the disappearance of Miss Carrie Selvage was believed to be cleared away with the finding today of a skeleton in the private hospital where she was last seen.

The skeleton was found by workmen who were turning the old building into a garage. Clothed in a blue dress, it was resting in a sitting posture in the corner of an attic. The costume, along with a pair of felt slippers, were recognized by three brothers of the dead woman. They are Edward L., William J., and Joseph W. Selvage, members of an old Indianapolis family.

The old building originally was an orphans’ home and later was converted into the Union States Hospital. It was at that time Miss Selvage entered the institution because of a nervous disease. Some time later it was turned into a roomed house. The building was of unusual construction and the place where the skeleton was found, a small corner about three by four feet, was apparently a second attic.

Miss Selvage disappeared March 11, 1900. She had sent her nurse for some milk. When the woman returned Miss Selvage was gone. A country-wide search was made, graves in cemeteries were opened and the hospital repeatedly searched, but no trace was found.

Coroner Robinson, in a preliminary examination, said he found no trace of violence. Miss Selvage was 43 years of age and had been a school teacher.


Well. Are we to believe Selvage ordered a glass of milk and then, without anyone noticing, made her way up to a cramped, remote little attic room to…just wait there to die? Or did someone, somehow, for some incomprehensible reason, lure her up there to be murdered? Or lure her out somewhere else to be killed, and then dump the body in the attic--again, without being observed in this busy little hospital? Assuming she had been in this attic all along, why was the room not searched after she vanished? In the two decades she had been missing, are we to believe that no one ever found this room? But if Carrie Selvage's body had only recently been propped up in this cubbyhole...where had she been all that time?  Who did what to her, and why?

This little story is full of obvious questions. And I’m damned if I can answer any of them.
Posted by Undine at 5:05 AM