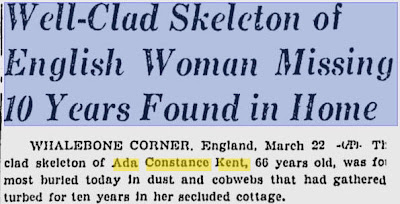 In 1939, an elderly Englishwoman named Ada Constance Kent disappeared. Robbery was soon ruled out as a possible motive.  Her cottage was found to be in perfect condition and nothing seemed missing--except Ada--but no clue to her whereabouts could be found.

Then, ten years later, at the request of her bank, her home in Essex was searched one more time. A skeleton was discovered in her bedroom.

Well…not necessarily. All the skeleton did was elevate this missing-person case from the ordinary, if puzzling, to the downright bizarre. Kent’s cottage had been carefully searched at least three times since her disappearance. Her friends were adamant that there was no way they could have missed a body lying by her bed. It must have been there only since the last time her home was inspected in 1942.

The newspaper reports are maddeningly contradictory about the identity of this skeleton. Some accounts say Scotland Yard did not believe this body was that of the missing lady—which would simply be piling weird upon weird—but most reports assert this was indeed her, and it is a fact that shortly after this body was found, a death certificate was issued for Kent.

But even if this was the missing Ada Kent, how do we explain her wandering bones?
Posted by Undine at 5:10 AM