The WLD is here! 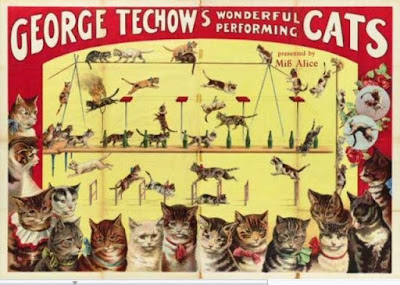 Where the hell were modern humans born?

Who the hell painted "Salvator Mundi?"

It's not always a good thing to find buried treasure.

The unsolved--and unsolvable--mystery of Poe's death.  (Note: the reason it's impossible to know how Poe died is that we have so few reliable details about his last days.  The main source about his final illness is Dr. Moran, and he was, to say the least, untrustworthy.)

A man who had molten metal spurted into his eye--and it turned out to be no biggie.  I still wouldn't try that at home, though.

The sad end of a heartbroken prison cat.

The meaning behind Celtic knots.

The "mother" of the American Thanksgiving Day.

The chapbooks of John Fairburn.

The paranormal Prime Minister.  (I've read some of King's diaries--they're available online--and I can confirm that he swam in some really weird waters.)

A strange disappearance in Yosemite.

Scientists want us to be able to smell ancient Europe, thus proving some researchers have way too much spare time on their hands.

The adventures of a female Victorian explorer.

The history behind a George Romney portrait.

A record of ancient Roman bribery.

The story of the fatal drops.

The time the Bronx had a panther hunt.

The theory that life on our planet was started by asteroids.

Pigeons: you love 'em, you need 'em, you've gotta have them.

The most important intellectual nobody's ever heard of.  Uh, except for the writer of this article, of course.

The first Englishman in Japan.

A brief history of dolls' houses.

A poisoner gets a theatrical execution.

Considering how the year is going, this wouldn't surprise me a bit.

A little-known battle's importance to the Revolutionary War.

The unsolved murder of a hitchhiker.

The search for cinnamon.

A psychic predicts her own death.

Unearthing the secrets of Saqqara.

A sinister disappearance at sea.

Why it's never a good idea to store arsenic in the kitchen.

A brief history of gout.

The diary of a body-snatcher.

The most famous speech in history.

That's it for this week!  See you on Monday, when we'll look at what just might be the weirdest story I've posted on this blog.  In the meantime, here's some Dowland.