The Strange Company HQ kitchen staff will be serving lunch with this week's Link Dump! 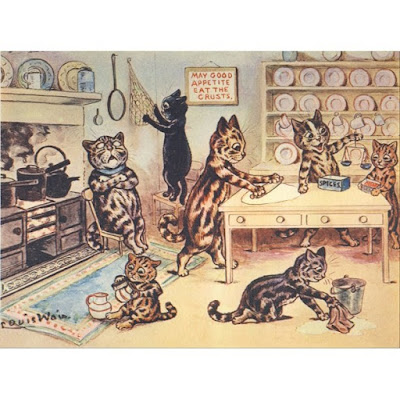 What the hell is the Upton Chamber?

The spooky lore of Lucedio Abbey.

A look at "The Consolation of Philosophy."

A look at a new biography of Longfellow.

The WWII mystery of Shingle Street.

The lore surrounding a Texas shipwreck.

The European roots of the Headless Horseman.

An accused witch and a prison extortion racket.

Analyzing when and why Americans lost their British accents.

Why mosquitoes like our blood.  (Considering I've just gone through a very itchy summer, my answer is: because they are all Satan's emissaries.

Marriage announcements in the old newspapers.

For just 31 million bucks, you could've bought your very own T. Rex.

It seems that our minds are much more than our brains.

A ghost visits a wake.

The art of the Olmecs.

Why you shouldn't shoplift from Pompeii.

Catherine of Aragon goes to war.

A new theory about the Tunguska Event.

The prelude to the battle of Hastings.

The watch cat of the Brooklyn Bridge.

The tomb of the real "Maid Marian."

Video of a dying star.

The bizarre tragedy of Blanche Monnier.

Birds show sympathy to others.

How Margaret Catchpole came to be transported to Australia.

This week in Russian Weird looks at an...unexpected coloring book.

The murder of a 14th century bishop.

A prehistoric journey revealed in footprints.

The position of wives in 18th century English law.

The season of the body snatchers.

The Bronte Country during WWII.

So there's a guy with a jetpack flying around LAX.

The slaves who fought for the British during the American War of Independence.

The history of HMS Dido.

How a saintly king lost his shirt.

The life of a WWI nurse.

That's a wrap for this week!  See you on Monday, when we'll look at one of England's most scandalous newspapers.  In the meantime, here's some Handel.