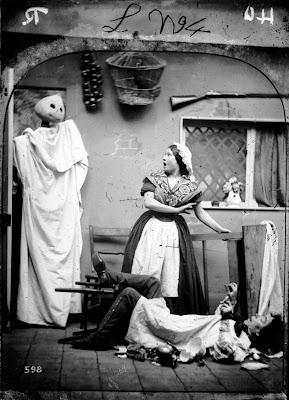 I’ve posted a number of Halloween cautionary tales on this blog, but I doubt I’ve shared a weirder one than this.  From the “Cork Mercantile Chronicle,” November 22, 1802, via Newspapers.com:

The sports of Halloween have been described by the fascinating Burns, but, whether in a way to deter from indulging in them, admits of a doubt.  That they have, in more than one instance, terminated lately, we have heard that they did so, in one instance, and that so late as last week we know--We give the following particulars from authority, and our informant trusts that they will prove a warning to inconsiderate youth to betake themselves to amusements more rational, and less likely to be attended with unpleasant consequences to themselves:

The ceremony of sowing hempseed on Halloween, is known to most of our readers.  A young girl of the name of Mabel Carr, servant to Mr. Mathewson, type-founder, would needs have her Halloween on Monday week; and, notwithstanding the earnest remonstrances of her master, who represented the impropriety and absurdity of prying into the secrets of futurity, she would not be dissuaded from sowing her hempseed on that night.  About ten o’clock she accordingly went into the foundry alone, with a light in her hand, which she placed on one of the tables while she performed her incantations.  She walked through the shop several times pronouncing aloud the words used on such occasions and so anxious was she to see something, as she termed it, that having seen nothing, she gathered up the seed to sow it a second time.  In the course of this second sowing, according to her own account, a tall meagre figure presented itself to her imagination!  She shrieked aloud, and ran immediately into the house, all the doors being open.  After relating all that she had seen, she went to bed, placing the Bible under her head!  She rose on Tuesday, and went through the labours of the day in apparent good health; but in the evening appeared somewhat timid.  She, however, had her supper, as usual, and went to bed, without any symptoms of fear.  Next morning she was called, but did not answer; again was called, but still no answer.  A daughter of Mr. Mathewson’s then rose, went to her, and found that she was very sick, and that she had been so during part of the night.  Tea was ordered for her, but before it could be prepared, she was seized with a stupor; the pulse became sunk, and breathing difficult, and the hands swollen and blackish.  A Medical Gentleman was instantly called.  He said, it was an attack of an apoplexy which she could not survive more than ten minutes; and in rather less than that time she expired, the blood bursting from her nose, mouth, etc.  The surgeon, on being informed of the transactions of Monday night, was clearly of opinion, that the impression made on her imagination by the fancied apparition was the cause of this fatal catastrophe.

We have given the particulars of this unfortunate affair so minutely, because reports, injurious to a very worthy man, have gone abroad on the subject.  It has been stated that one of Mr. Mathewson’s men concealed himself in the foundery, to alarm the girl during her foolish probation.  It is false.  Mr. M.’s people leave off work at eight o’clock; this happened at ten; and there was not a soul within the shop but herself.  It has been further stated, that she fell into a faint on the appearance of the fancied spectre, and was left to die in that situation.  It will be seen, from the above authentic statement, that this is an absolute falsehood, and a most malicious one.

So, however, you celebrate Halloween this year, avoid the hempseed.  Unless, of course, you want to see something.

And now that I think of it, if you read this blog, you probably do.