The Creature of Charterhouse 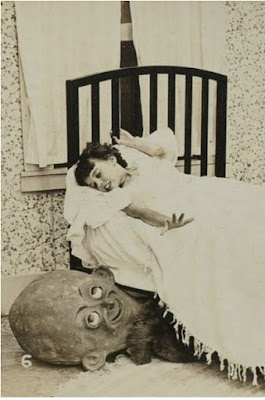 "Things that go bump in the night" is a common phrase to describe ghosts or monsters, generally the ones that appear in fiction. However, according to one man, this cliche played out in real life, and in one of the most unusual ways I've ever heard of. If his story, recorded by Betty Puttick in her book "Supernatural England," is to be believed, it gives rise to another cliche: "Truth is stranger than fiction."

The setting for our story is Charterhouse, which was, from ancient to Victorian times, a mining community in Somerset County, England. It has been occupied, in one form or another, since the late Neolithic period. The little hamlet now just consists of a former church and school, transformed by the County Council into an educational establishment focusing on outdoor activities. It is an area rich in natural beauty, with some spots seeming to be unchanged for centuries. It is also rich in caves, archaeological finds, and--according to some people--some very, very strange secrets.

In February 1982, Richard Gardner, a teacher at Bridgwater's Haygrove School, was one of the leaders of a student visit to Charterhouse. He had a group of five 15-year-old girls under his particular watch. When they completed their hike through the area, it was discovered that one of the girls, Maria, was missing. Naturally, a search was immediately launched. In his van, Gardner retraced the group's route. At one point, he stepped outside the car, calling Maria's name. He was disconcerted to hear, not the missing girl, but the sounds of small children playing and laughing.

This was...curious. The nearest village was five miles away. The barren, open landscape showed no sign of life. Besides, it was now a driving rainstorm--hardly the sort of weather for outdoor frolics.

Fortunately, when Gardner returned to the Charterhouse center, he found Maria there, none the worse for her little detour. Apparently she had merely become lost, and so retraced her steps back from where she came. Her disappearance was quickly and easily solved. The voices Gardner heard were not.

After the group had fruitlessly discussed the little mystery, talk naturally turned to ghost stories, with some of them sharing their own brushes with the paranormal. Someone asked a man named Terry, the warden of Charterhouse, if he had seen or heard anything strange in the area.

Terry was a former Marine Commando, and looked the part. He was a tough, no-nonsense sort who immediately inspired respect and deference, even in the rowdiest students. In short, he was not someone who scared easily...but, he had to admit, he had once experienced something at Charterhouse which frightened him very badly.

The school center was also used by the local Cave Rescue Team to store their equipment. About a year before, he had been at the center alone to do maintenance work on this equipment. It was a long, tedious job, so he thought he might as well spend the night at Charterhouse. After having dinner and watching some TV, Terry retired to a bunk bed in the sick bay.

At around 1 a.m., Terry was awakened by the sound of some animal rustling about outside. He shrugged it off as a just a badger and went back to sleep. Then his sleep was again broken by similar noises. Only, this time, they came not from the outdoors, but somewhere inside the building.

Terry was puzzled, as he knew he had locked all the doors, as usual. However, he was too tired to investigate. Muttering to himself that if the animal could find its way in, it could find its way out, he attempted to fall asleep.

The trouble was, the noises continued. And they were getting closer. Within a few moments, he heard the animal coming up the stairs, scratching and snuffling all the way. The intruder was soon right outside his door. Terry was getting deeply unsettled.  It was not normal for any wild animal to break into an occupied building and act like they had the run of the place.

Then Terry's night went from unnerving to flat-out-terrifying. The sounds changed from snorting and scratching to the noise of something large and bristly slowly, loudly, squeezing itself through the half-inch gap on the bottom of his door. Whatever "it" was, it was coming for him.

Terry was trapped. There was no way he was going to head for the door, in the dark, with this...thing blocking his path. The snuffling noises came closer, and closer, until they were within inches of him. Then the bed suddenly began rocking violently. This lasted less than a minute, and then, to his relief, he heard the phantom beast retreat. It squeezed its way back under the door. The sinister sounds made their way back down the stairs and outside the building, where they gradually faded away into the night. Checking his watch, Terry noted that the whole weird ordeal had lasted an hour. In the morning, he saw that his bed was covered in plaster. When his bed had been shaken, Terry had grabbed the electric cabling on the wall for support. The upheavals were so violent, he had pulled the cabling free.

After the students heard Terry's little bedtime story, they all spent the night in the room where they had gathered, sleeping on chairs. There was no way any of them were going out into the night to reach the accommodation building.

The question of what in hell--or, if you prefer, what from Hell--Terry met that night was never answered. There was, however, a disconcerting sequel to the story. A year later, another school group visited Charterhouse. Among them was one of the teachers who had been among the group who heard Terry's story. Terry slipped the teacher a note. It contained only five words: "My visitor returned last week!"

So if you're ever visiting the Charterhouse area, I advise you not to check for monsters under your bed. They just might be there.
Posted by Undine at 4:40 AM