The Body On the Beach 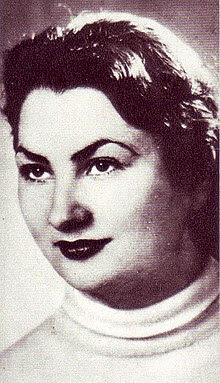 "We want to find out what is the conclusion and the moral. Nobody stays in a theater for over two years and then goes out knowing no more than when they came in."
~anonymous Italian commenting on the Montesi case.

Sex. Mystery. Tragedy. Scandal in high places. Political intrigue. And a beautiful young woman in the center of it all.

Some murder cases just seem to have everything.

In 1953, 21-year-old Wilma Montesi lived with her parents and sister in Rome, Italy. She was a very attractive and alluring young woman, who, like so many pretty girls, dreamed of a movie career. (This ambition never progressed beyond an uncredited bit part in a forgettable 1952 film, "Prison.")  Despite her status as "the beauty of the family," she was considered to be extremely shy and reserved.  Despite her family's lower-middle-class status, Wilma and her sister Wanda somehow managed to enjoy numerous little luxuries:  American makeup and perfume, expensive clothes.  Even their underwear was all silk.  Wilma was engaged to marry a policeman the following Christmas, and was busily working on her trousseau.

Wilma's seemingly quiet and ordinary life took its turn for the weird on the afternoon of April 9. Her mother and sister invited Wilma to accompany them to see a movie, but she declined. Her excuse was that the film didn't interest her, but subsequent events suggested that she had plans that she did not wish her family to know about.

After her mother and sister had gone, Wilma too left her apartment at around 5:30 p.m. She took nothing with her, not even a piece of jewelry given to her by her fiance, which she normally always wore. Witnesses later claimed to have seen her boarding a train bound for Ostia. A shopkeeper in that town testified that on this same evening, someone matching Wilma's description bought a postcard from him, which she said was for her boyfriend.  Eyewitness testimony is notoriously unreliable, so it is impossible to know if these sightings truly were of Wilma.  Her activities that night remain uncertain. All we know for sure is that she was never to return home.

When Wilma's mother and sister returned home, they were disconcerted by Wilma's uncharacteristically unexplained absence. When she failed to turn up that night, they contacted police. Wilma's whereabouts remained unknown until the morning of April 11, when a laborer having his breakfast on the beach at Tor Vaianica made a grim find: the dead body of a young woman lying face-down in the surf.  She did not appear to have been dead for very long.  She was without shoes, skirt, or garter belt, and her purse was missing as well. When the description of the dead woman appeared in the newspapers, it enabled Wilma's father, Rodolfo Montesi, to recognize the corpse as his missing daughter.

Identifying the body as Wilma was easy. Determining how and why she had died would prove to be considerably more complicated. There were no marks of violence on her body, and no traces of drugs or alcohol in her system. Despite what her missing garments might suggest, doctors determined that Wilma was not sexually assaulted: in fact, she was still a virgin. In short, there were no discernible signs of foul play. There was absolutely nothing to indicate she had been suicidal. So, then, how did she happen to die on a beach twelve miles from where she had last allegedly been seen?

The best explanation the medical authorities could devise was that Wilma had gone to the beach at Ostia in order to soak her feet (she often took foot baths to relieve a nagging heel irritation.) She removed her shoes and skirt and began wading in the sea. Then, she suffered a "sudden syncope." She passed out into the water, and drowned. Then, her body drifted to where it was eventually found. Just a sad little accident. All very neat and tidy. Wilma was quietly buried in her newly-finished wedding dress, and as far as police were concerned, the matter was closed.

The Italian press, however, thought differently. Journalists were convinced there was something sinister about this young woman's odd death. They just had to find out what it was.

On May 4, the newspaper "Roma" published a startling claim: Wilma had been murdered, and the police covered it up. This was soon topped by a bombshell report in the magazine "Vie Nuove," stating that a jazz musician named Piero Piccioni had handed Wilma's missing clothing to the police. As Piccioni was the son of Italy's Deputy Prime Minister Attilio Piccioni, (not to mention the lover of glamorous film star Alida Valli,) this naturally sparked a considerable commotion.

Piccioni was outraged. He sued Marco Sforza, the writer of the "Vie Nuove" article, as well as the magazine's editor. Under this legal pressure, Sforza retracted his story. The lawsuit was dropped, and it appeared that Wilma Montesi would be allowed to rest in peace.

Piccioni promptly sued Muto, and Bisaccia also vehemently denied the tale. Then, the increasingly lurid story took another unexpected twist when a second actress, Maria d'Istria, decided to join the fun. She declared that not only was Muto's story true, but that Wilma had been the mistress of Ugo Montagna, the man who allegedly hosted the fatal party. Montagna was a wealthy Sicilian with a shady past (and present!) but who held great political influence. Yet another starlet, a former lover of Montagna's named Anna Caglio, came forward. She accused Montagna of running an extensive network of dope peddling and sex trafficking, with Piccioni as his chief "assassin." Montesi, Caglio declared, was only one of many murders committed by this gang of criminals.

Well. The solid waste product had now well and truly hit the rotating blades. Such was the uproar about these revelations, that in March 1954 it was felt necessary to reopen the investigation into Montesi's death. Attilio Piccioni was forced to resign from the government. Although both Montagna and Piero Piccioni strongly insisted that the charges against them were mere smear tactics instigated by their political rivals, the two men were arrested. Piccioni was charged with manslaughter, with Montagna named as his accessory after the fact. The Roman police chief who had led the initial investigation into the death was also put on trial, for allegedly masterminding the official cover-up. All three men maintained their innocence. Montesi's family, perhaps unsurprisingly, also angrily denied the story. They insisted that Wilma was not the sort of girl to get involved in drugs or illicit sex. 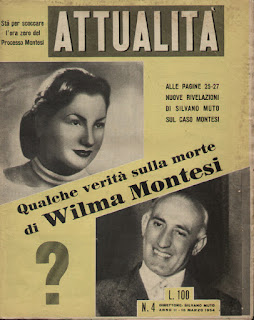 After all this excitingly juicy dirty laundry had been aired, the trial of Piccioni and his supposed helpers proved to be a profound anticlimax. The charges made by the actresses were ridiculed in court, and their testimony dismissed. Alida Valli provided Piccioni with an alibi for the night of Wilma's death. The three men were acquitted, and Montesi's demise was left right back where it started: with an official ruling of "accidental death." The newspaper "Il Messagero" was left to mourn, "Of all the terrible suspicions which tormented public opinion nothing is left: no orgies, no white slavery, no boatloads of prostitutes, nothing." The whole earth-shaking scandal dissipated and disappeared like the morning fog.

It was quite a letdown.

Definitive answers about Montesi's enigmatic death have never been found--likely never will be found--leaving this otherwise obscure young woman to achieve a posthumous fame which continues in Italy to this day.  There would never be a conclusion, nor a moral.

[Note: Some believe the Montesi scandal inspired the classic film "La Dolce Vita."]
Posted by Undine at 4:46 AM